BlackRock Called on Carpet by AGs for Ignoring Fiduciary Duty

Seventeen of our state attorney generals have decided to call out BlackRock;’s despicable attempts to implement globalist elite government using ESG as its weapon of choice:

Based on the facts currently available to us, BlackRock appears to use the hard-earned money of our states’ citizens to circumvent the best possible return on investment, as well as their vote. BlackRock’s past public commitments indicate that it has used citizens’ assets to pressure companies to comply with international agreements such as the Paris Agreement that force the phase-out of fossil fuels, increase energy prices, drive inflation, and weaken the national security of the United States…

Moreover, BlackRock joined groups so focused on promoting the Paris Agreement that they want to stifle opposing viewpoints altogether. Climate Action 100+ “aims to ensure the world’s largest corporate greenhouse gas emitters take necessary action on climate change.” Members of Climate Action 100+ commit to forcing portfolio companies to “align[] political lobbying with the Paris Agreement,” without allowance for whether such an alignment would be in the financial best interests of the company. The nature of our legislative process produces carve outs, exceptions, delays, or exemptions, any of which may be in the financial interest of the companies requesting them. Yet BlackRock appears to have determined that every company should support the Paris Agreement without exception. Squelching political speech is the action of an activist whose mind is made up, not that of a neutral fiduciary seeking “dialogue.” 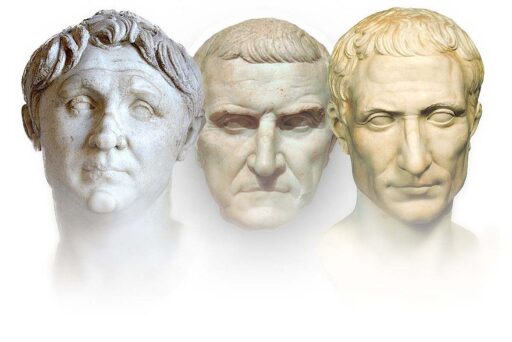 The First Triumvirate of the Roman Republic (L to R) Gnaeus Pompeius, Licinius Crassus, and Gaius Julius Caesar. Is it being replaced by Larry Fink, Klaus Schwab and Bill Gates?

BlackRock’s commitment to the financial return of state pensions should be undivided. Many of our laws state that a fiduciary must “discharge [their] duties solely in the interest of the participants and beneficiaries . . . for the exclusive purposes of . . . providing benefits to participants and their beneficiaries; and . . . defraying reasonable expenses of administering the system.” The stated reasons for your actions around promoting net zero, the Paris Agreement, or taking action on climate change indicate rampant violations of this duty, otherwise known as acting with “mixed motives.”

As one commentator has put it: “Acting with mixed motives triggers an irrebuttable presumption of wrongdoing, full stop.” Whether mixed motives arise from a desire to save the world or attract investment from European or left-leaning pension funds, is ultimately irrelevant to the legal violation. Investors have wide latitude over their own money, but our state pensions must be invested only to earn a financial return.

Larry Fink, BlackRock’s leader wants to be part of a new Roman Triumvirate together with Klaus Schwab and Bill Gates (or is it George Soros?) that will rule the world. These attorneys general are saying “not so fast” but where are the other 33? Does Pennsylvania’s Josh Shapiro really want these tyrants deciding what the Commonwealth can do? It appears so, as he didn’t sign.

Inflation Reduction Act A Massive Transfer of Wealth to Elites

It’s all about the money and the power. The environment, ideology and the planet are merely the excuse, the fig leaf and the wizard’s curtain:

[Joe Biden has signed] the Orwellian-named “Inflation Reduction Act” into law on Tuesday, cementing his place as the farthest leftwing president in American history. By doing so, he joins his fellow Democrats in congress – every one of whom voted for the bill on a straight party-line vote – in betting their party’s future on three rent-seeking industries: Wind, solar and electric vehicles.

The track records of those three industries would indicate that this is not a sound bet for the Democratic party, but Democrats believe the crony capitalist politics at play work in their favor. It’s the same party that made a similar huge bet during the leadup to the 2010 mid-term elections on Obamacare, forcing that 2,000-page monstrosity through without a single Republican vote. The American public responded to the socialization of the medical system by voting for a record-setting Red Wave, sending dozens of congressional Democrats and thousands of state and local-level Democrats into the political wilderness.

This one-party action by the Democrats is likely to create another Red Wave, though senate politics are conspiring to make it somewhat less overwhelming than in 2010.

Make no mistake about this bill: What it really is is a massive transfer of wealth, taking hundreds of billions out of the pockets mainly of lower-and-middle-class Americans and putting those dollars into the pockets of Big Renewables and EV makers. At its core, that’s what it is: This is not an arguable point. As was the case with Obamacare, this is crony capitalism at its very worst. 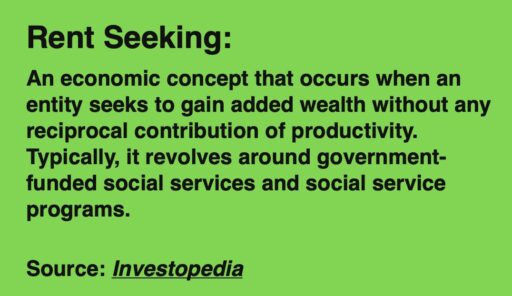 In 2010, the Democrats made the bet that, although they would take a beating at the polls in the near term, in the longer term their party would benefit from addicting millions more Americans to government-funded healthcare. That political benefit would be achieved via a different transfer of wealth, with hundreds of billions of dollars taken away from those in the middle class and above who must pay their own medical premiums to those in the lower classes who are subsidized by the government, with the ever-expanding bureaucracies taking a big cut out of the middle, of course.

The transfer of wealth in this “Inflation Reduction Act” is just the same. Like Obamacare, this act takes money from ordinary Americans and directs it to the Democratic party’s chosen rent-seeking industries, with the feds taking their cut. In return, those industries will continue their practice of being major funders of the political campaigns of Democrat politicians, like the medical insurance companies and Big Pharma have done since 2010.

This is the cold hard truth. It’s all about the crony capitalism or corporatism; the thievery of resources from the common man for the benefit of elites through an unholy alliance of rent-seeking corporatists and government that is precise opposite of real capitalism.

The World Economic Forum, the organization used by globalist elites to advance their special interests, aims to establish a social credit system just like China’s, voluntary at first and coercive later, using the climate scam as cover:

Let me introduce you to Barbara Baarsma. Barbara is the CEO of Rabo Carbon Bank. Yes, you read that right. Not Rabo Bank but Rabo Carbon Bank. In this 53 second video interview below she is advocating for a “Personal Carbon Wallet”. That may not seem like a big deal but when you hear what she has to say you should be concerned, very concerned in fact.

I’ve transcribed the interview as it is in Dutch. It contains critical information. If you prefer to watch the video with subtitles by all means please do so.

Or if someone lives in a small house, he can sell his emission rights to someone who lives in a big house, this way poor people can benefit from the green economy”

Wow. Quite something isn’t it. Let’s pick it apart and then look at how they are probably going to implement it.

You could argue that it’s just another level of taxation which the globalists will take. I think it runs far deeper. When Bankers start using expressions like rights, poor people and green economy you can be sure that they are envisaging a world for the elite. They don’t give a fig about anyone else.

So in its most basic form, you’ll have no fun and won’t be allowed to travel anywhere. But don’t worry the elites will have the fun for you.

This is nothing more than Totalitarianism.

Did I forget to mention that Rabobank and Baarsma are both in the World Economic Forum?

When most people think of carbon emissions and carbon footprints they think it only refers to travel, fuel, gas and electricity all under the guise of emissions. I hate to break it to you but it runs far deeper than that.

Let me now introduce you to Doc Ono, a company you may never have heard of.

In May 2019 an article appeared on the WEF site called

“This credit card has a carbon-emission spending limit”

In the article it says

Yikes, cuts off their spending.

“The DO card tracks the CO2 emissions linked to purchases to calculate the carbon impact of every transaction. The aim is to encourage people to actively reduce their carbon footprint and demonstrate the impact that small changes can have on the environment.

Now we are getting closer to the truth of how this is going to operate. It isn’t just travel, it will be for everything.

None of this is accidental, coincidental or happenstance. Klaus and friends want us to “own nothing and be happy” as slaves to his club of elites. Be salert. Speak up!