FERC Jumps Off the Building

FERC, now under the thumb of Buffoon Biden’s appointees, has now officially gone over the edge, having jumped off the top of its bureaucratic headquarters in faith something will save it before reaching the sidewalk:

In a separate 3-2 vote, the commission voted to take a project’s estimated greenhouse-gas emissions into consideration during approvals… Commission Chairman Richard Glick, a Democrat, said the policy changes will provide more clarity to pipeline developers on how the commission will balance the need to expand affordable natural gas to customers against environmental interests.

“If we were to continue [turning] a blind eye to climate change and greenhouse-gas emissions, it would simply be adding to the legal uncertainty” around project approvals, Mr. Glick said during a meeting.

The new rules were being closely watched by pipeline developers, who already face permitting court challenges, and the U.S. natural-gas export industry, which is eager to expand to send cheap and abundant gas from shale drilling overseas, including to supply-squeezed Europe amid Russian hostilities toward Ukraine.

The stone cold ivory tower from which FERC has jumped

“The Federal Energy Regulatory Commission is determined to make it nearly impossible for Americans to maintain or improve access to abundant and affordable supplies of natural gas,” he said.

The American Petroleum Institute, the top oil and gas lobbying voice, and other industry groups had discouraged the commission from making policy changes and said that it already takes a project’s environmental footprint into consideration…

Pipeline opponents have pressured the commission to revisit the policy as part of their effort to transition the U.S. energy infrastructure away from fossil fuels and toward more climate-friendly systems. Most U.S. natural gas moved through pipelines is burned, releasing planet-warming greenhouse gases into the atmosphere.

So, FERC is now going to consider global warming in deciding whether to approve pipelines, as if any pipeline of any size or length could conceivably have the slightest impact on it. What it’s really about, of course, is opening the door to NRDC lawsuits financed by the New York City and Philadelphia gentry class that will further slow and kill pipelines, undermine the industry and clear a path for green energy scams. When Glick says he’s about eliminating uncertainty, it is precisely the opposite. And, notice the weakness and total futility of the API appeasement approach, which only enables further actions by the enemy to destroy it.

Canadian Fascism Not Limited to Ottawa

That Canada now has a fascist premier in the person of Justin Trudeau, the poster child for all spoiled brat totalitarian trust-funders, is now beyond any doubt. And, fascism begets fascism, which is what is happening in British Columbia right now:

Violence has erupted at a Coastal GasLink pipeline work site in Northern B.C., leaving workers shaken and millions of dollars in damage.

Very early Thursday, just after midnight, Coastal GasLink security called RCMP for help, reporting it was under attack by about 20 people, some wielding axes.

RCMP Chief Supt. Warren Brown, commander for the north district, called the attack a “calculated and organized violent attack that left its victims shaken and a multi-million dollar path of destruction.”

Coastal GasLink said in a statement the attackers surrounded some of its workers in a “highly planned” and “unprovoked” assault near the Morice River drill pad site off the forest service road. 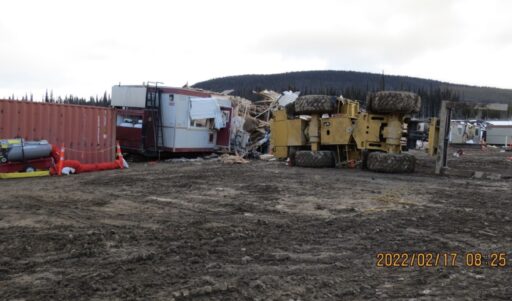 “In one of the most concerning acts, an attempt was made to set a vehicle on fire while workers were inside,” said the company in a statement. “The attackers also wielded axes, swinging them at vehicles and through a truck’s window. Flare guns were also fired at workers.”

The company said its workers fled. They were shaken, but no one was physically injured…

After the attack, the attackers disappeared into the night.

RCMP said responding officers were met with a blockade of downed trees, tar-covered stumps, boards with spikes, and fires at the forestry road’s 41 km mark. As police worked their way past the debris, people threw smoke bombs and fire-lit sticks at them. One officer was injured.

This is what useful idiot global warming and other fanatics intent upon creating their utopian empires believe they are entitled to do by their supposedly superior values. The gentry class finances them for its own special interest purposes, of course, among which are power and opportunity to further engorge themselves at governments’ green energy troughs. It’s pure undiluted fascism and the big little fascist, Trudeau, is busy fighting a peaceful protest in Ottawa by working family truckers fed up with Wu-Flu tyranny; a variation on fascism.

DRBC Worried About Fracking with “No Discernible Impact” on Water Quality While Members Export Human Wastes!

The DRBC is now proposing a ban on the import and discharge of wastewater from hydraulic fracturing and related activities to Delaware River basin lands and waters; at the direction of the Delaware PovertyKeeper and other gentry class shills from New York and New Jersey. Yet, the twin know nothing DRBC commissioners from these states are apparently very content with their jurisdictions exporting human wastes from the belly of the metro beast to Alabama for disposal:

Fascinating, isn’t it? Fracking wastewater in Northeastern Pennsylvania is typically recycled, which means this entire proposed rule is a meaningless virtue signaling gesture designed to appease the special interests pushing it. It has zero impact on anything  and, as such perfectly depicts the corruption that pervades so much government today.

Moreover, fracking, has been found by the DRBC’s sister SRBC agency, despite having the same governing majority, to have had “no discernible impact” on stream water quality. Yet, New York and New Jersey have the nerve to lecture us about the dangers of fracking and fritter time away on inconsequential import rules while exporting their wastes via “poop train” to Alabama. We knew the DRBC was composed of fibbers, but it’s worse than we thought. They’re potty-mouthed dung merchants.