The worlds biggest financial rip-off and theft is being planned in Congress by Democrats in service to hedge fund hustlers:

In the coming weeks, Congress may pass one of the most important climate policies in US history.

The $3.5 trillion budget plan includes a provision known as the Clean Electricity Payment Program, which would use payments and penalties to encourage utilities to increase the share of electricity they sell from carbon-free sources each year…

The Clean Electricity Payment Program is a twist on a clean electricity standard, a regulation numerous states have implemented that requires utilities to reach certain levels of clean electricity by specific years. The proposal mainly opts for payments and penalties over binding mandates because that could enable it to pass under a legislative process known as budget reconciliation, which requires only a simple majority of votes in the Senate.

Once companies boost their share of clean electricity above an annual target, they would earn payments for every additional megawatt-hour of electricity they sell that comes from carbon-free sources, according to an analysis by the Clean Air Task Force. Those that fail to reach that threshold would have to pay a fee…

The budget plan also includes federal tax incentives for building more clean electricity generation. With those credits, the program would be funded at around $150 billion to $200 billion, according to Third Way, a center-left think tank in Washington, DC.

Added together, the measures in the package would amount to “the biggest, most ambitious climate and clean energy policies that the US has ever enacted, by far,” says Josh Freed, head of the organization’s climate and energy program…

Meanwhile, other studies have found the shift to around 80% carbon-free electricity would spur $1.5 trillion of investments into clean energy…

Read it again with an eye to the numbers and not the carefully inserted code words and puffery. This bill would steal $1.5 trillion from taxpayers and ratepayers Usually the same people) to subsidize inefficient, uneconomical green eggs and scam, rewarding the current financiers of the Democrat Party on the corporatist left.

And, Guess Who Else Stands to Benefit?

China’s Ganfeng Lithium, one of the world’s top producers of the battery metal, is going ahead with the takeover of Bacanora Lithium (LON: BCN) as the Mexico-focused explorer and developer has accepted a sweetened £284.8 million (about $391m) cash offer…

Beijing announced last year a development plan for the so-called new energy vehicle (NEV) industry in 2021-35. It is targeting a 20% share of NEVs in the country’s total vehicles sales by 2025, which supports the demand for battery materials in the long run. 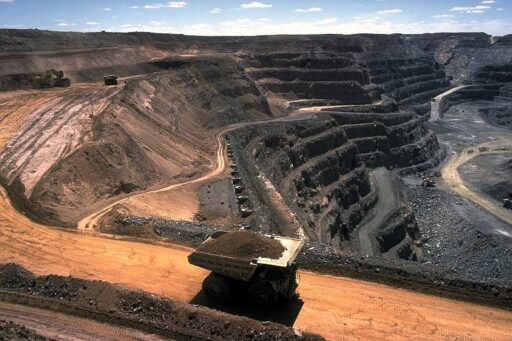 Gangfen paid C$353 million ($278m) in July for Canada’s Millennial Lithium, which has the Pastos Grandes project in Argentina. The previous month it had paid $130 million for half the Goulamina lithium mine in Mali.

The Chinese miner is also advancing a planned C$353 million ($280m) acquisition of Argentina-focused Millennial Lithium, which will give it control of four of Latin America’s biggest lithium deposits, hosting combined lithium carbonate equivalent resources of 43.5 million tonnes, based on figures from Mining Intelligence.

Gangfend is simultaneously exploring setting up a batteries plant in Argentina, where is developing the Cauchari-Olaroz lithium brine project, in the country’s northwestern Jujuy province.

An International Energy Agency (IEA) report published in May recommended governments to start stockpiling battery metals, noting that lithium demand could increase 40-fold in the next 20 years. IEA executive director Fatih Birol said this would become an “energy security” issue.

Whose energy security is the question and it isn’t that of the U.S., which has the natural gas and oil to ensure such security but is being sold out by corporatists and politicians invested in green eggs and scam. China desperately wants us to buy and then we’ll be at their mercy for lithium. It’s not hard to follow.

Pennsylvania Going for the Blue Ribbon in Natural Gas Production!

Well, this should make for a miserable day at headquarters of the Heinz Endowments, the William Penn Foundation and all their shills at the Delaware PovertyKeeper, the Clean Air Council, Penn Future, StateImpactPA, et al. Think of the hundreds of millions in gentry-class trust-funder inheritance dollars wasted fighting natural gas development in the Keystone State! 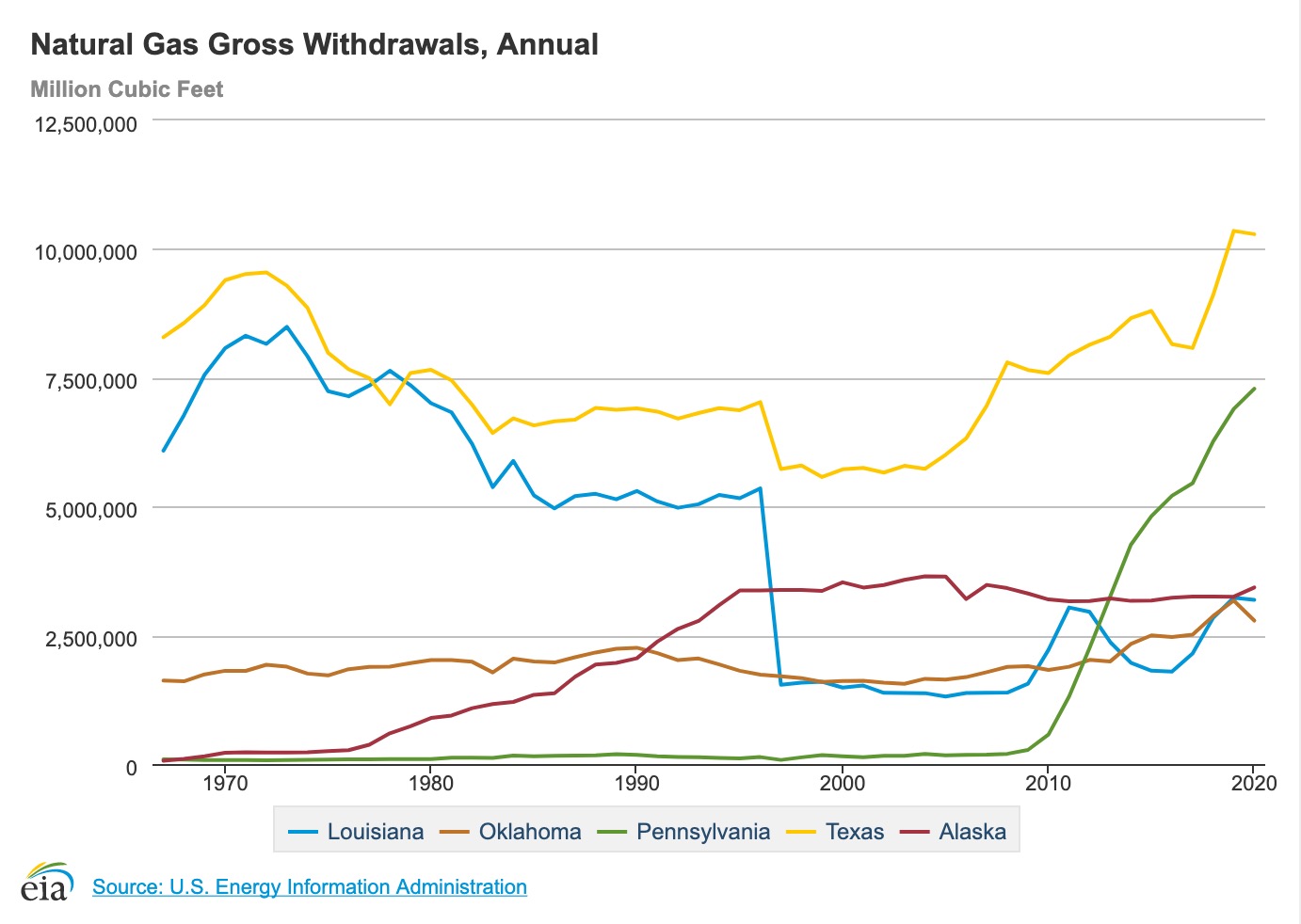 “Pennsylvania is right on the heels of Texas, the nation’s top natural gas producer, because the fundamentals of the Marcellus and Utica shale plays are strong, pipeline capacity has improved, and producers and midstream operators continue to make efficiency gains,” said Dave Callahan, president of the Marcellus Shale Coalition, in a statement.

Through May 2021, the state reports shows that Pennsylvania had the strongest year-over-year growth of any of the top five gas-producing states. It tracks with the state’s continuous strong growth in production over the past decade.

Ain’t it grand? Now, if we could only harvest the natural gas in Wayne County, the one area of the Commonwealth where natural gas rights have been stolen from landowners. But, have no fear, justice will prevail.

There’s one thing about which we can absolutely sure; the gentry class folks living on Nantucket are the type who throw money at “climate change” causes to protect their images and their wealth from the hordes. They’re the type only too pleased to suggest places such as Upstate New York be covered with solar panels and wind turbines. But, block their views, and there are no lengths to which they will not go to oppose such things anywhere near them, which is why land-gobbling solar and wind can never provide the energy promised:

Today brings another lawsuit in federal court by NIMBYies, this time on Nantucket, seeking to kill the Vineyard Wind project.  As in a lawsuit filed by a Martha’s Vineyard NIMBY earlier this summer, the Nantucket NIMBYies allege the Federal Government has failed to adequately assess the environmental impacts of this critically important renewable energy project. 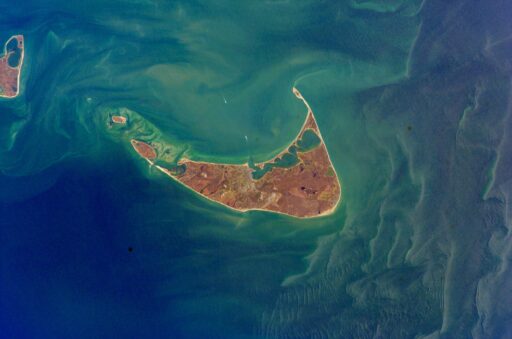 Experts will say that’s ludicrous — the several thousands of pages of environmental impact statement comprehensively identify potential negative impacts and every way possible to mitigate them.  The Vineyard Wind developer has also agreed to pay for the negative impacts that can’t be mitigated.

At least these NIMBYies are honest about why they are using litigation to try to kill the project despite all of that.  They “will be able to view the proposed wind farm from public and private vantage points on Nantucket” and they’re also “deeply committed to the historical heritage of Nantucket, which the Vineyard Wind project is sure to damage.”

Ironically, the writer of this little op-ed is a big global warmist himself, blissfully unaware of the political realties involved in pushing solar and wind. It tells us a lot about the gentry class and their favorite cause. It’s all games to them, every bit of it.