Well, here are some stunning admissions from the folks at the agency now trashing the natural gas they heralded just yesterday and suddenly promoting the cause of green scamming hedge funders:

Here’s the problem—the push to boost renewable power capacity (think solar, wind and batteries) is extraordinarily metal-intensive, requiring more minerals than fossil fueled based counterparts. Not surprisingly, then, the 45% surge in renewable electricity capacity last year has triggered a commodities boom in mining and production. However, the metals extraction and processing businesses are significant contributors to carbon emissions, as well as an acute source of stress on the world’s air quality, water reserves and soil composition. Perversely, then, the transition to clean energy could be less “clean” and “green” than commonly thought.

A new report from the International Energy Agency (“The Role of Critical Minerals in Clean Energy Transitions”) puts all of this into perspective: “A typical electric vehicle (EV) requires six times the mineral inputs of a conventional car, and an onshore wind plant requires nine times more mineral resources needed than a gas-fired plant…

To reach the goals of the Paris Agreement would mean a quadrupling of mineral requirements for clean energy technologies by 2040.

It has taken on average over 16 years to move mining projects from discovery to first production. These long lead times raise questions about the ability of suppliers to ramp up output if demand were to pick up rapidly.

Copper and lithium are particularly vulnerable to water stress given their high water requirements. Over 50% of today’s lithium and copper production is concentrated in areas with high water-stress levels. 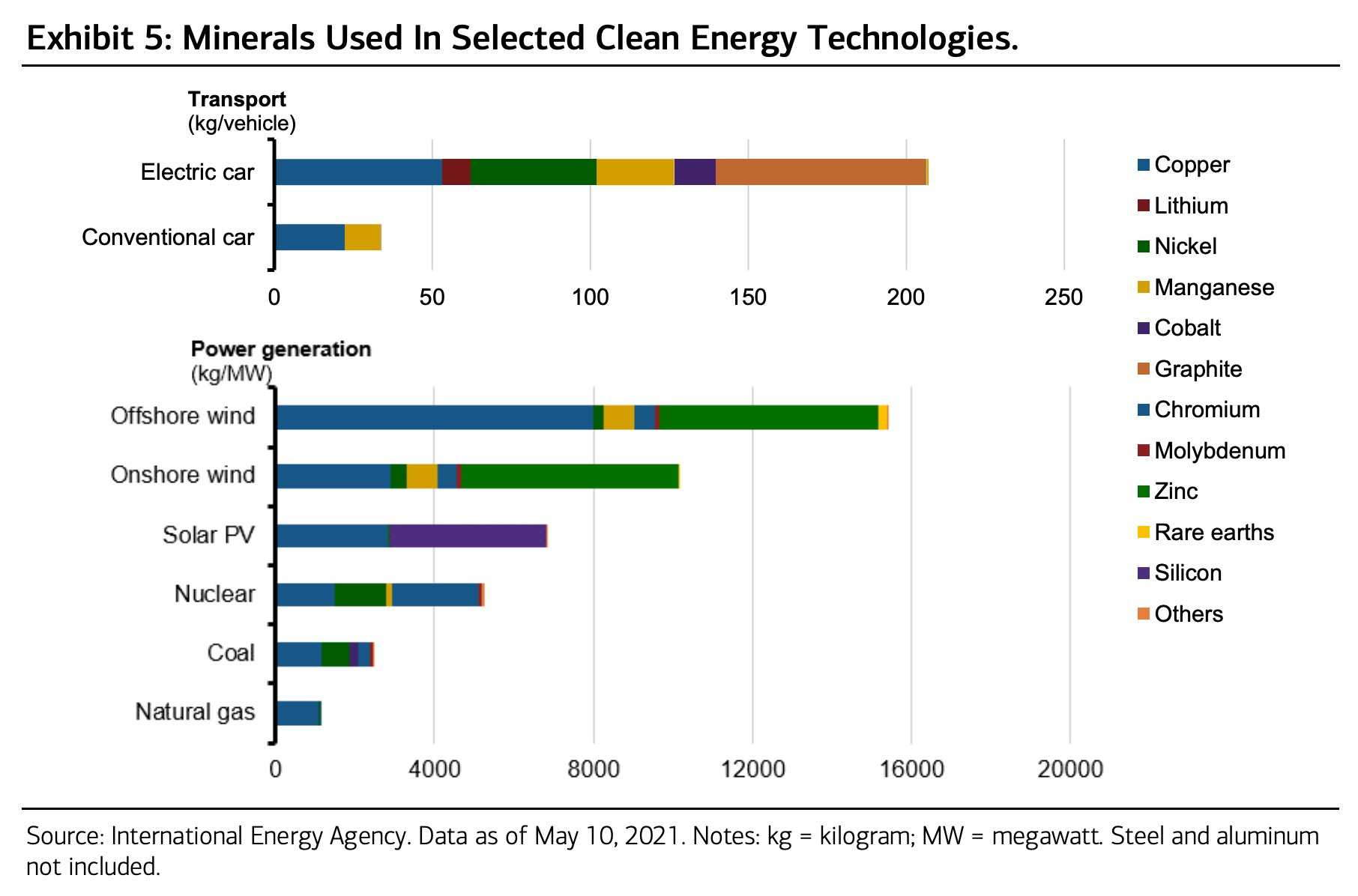 Production of many energy transition minerals is more concentrated than that of oil or natural gas. The Democratic Republic of Congo is responsible for over 70% of cobalt output; China controls 60% of rare earth minerals and graphite; South Africa supplies roughly 70% of platinum production; and Australia accounts for over half of global lithium output. The upshot: Concentrated production and processing represent a serious supply chain risk to end users.

Why are they admitting this? Because they can’t imagine we little people are paying attention.

Let’s Burn the Forests for Energy!

The absolute total absurdity of the global warming scam is further revealed in still another take on the IEA sellout to the global corporatists pushing green eggs and scam:

There are also worries about bioenergy which involves the use of trees, crops and plants to make liquid fuel or to generate electricity.

The IEA path to net-zero sees a significant increase of around 60% in this energy source, with an estimate that energy crops and forestry plantations will take up 25% more land than is used today for bioenergy production.

“Burning forests for energy is the latest in a parade of false climate solutions,” said Hannah Mowat from Fern, a Brussels-based NGO campaigning to protect forests and people.

“Sadly, the IEA has bought into it by proposing wholly unrealistic levels of bioenergy, which will damage forests the world over and worsen climate change. Instead of burning trees for energy, we should focus on cutting fossil fuel use, maximising energy efficiency and increasing renewables such as solar, wind, heat pumps and geothermal.”

What’s especially interesting here, in addition to the foolishness of “bioenergy,” is the self-destructive infighting among green goblins when it comes to choosing among renewables, all of which put together can’t replace natural gas. The tree huggers want us to avoid cutting them and would rather we focus on creating 60 story concrete, steel and fiberglass structures to put on the mountaintops we’re clearing. Those next door to the wind turbines and the acres of glass would prefer we cut the trees and drill—yes, drill— for geothermal.

Will Natural Gas Serve As A Peacemaking Tool in the Mideast?

Our friend Dan Markind offers some excellent reflections on the role of natural gas in reaching Mid-East peace:

For more than a week Israel and Hamas have been battering each other with rocket fire coming from Hamas in Gaza and airstrikes coming from Israel. The destruction and loss of human life are appalling – from both sides of the conflict. Gaza, whose economic possibilities always take a backseat to Hamas’s military desires, has been set back a decade – yet again. Barely recovering from the last major conflict in 2014, and under constant economic restrictions from both Israel and Egypt due to its Hamas priorities, the densely populated strip must now again dig out from the rubble. When it is done burying its dead, it must try to reestablish its antiquated power and utility systems, and rebuild large swaths of housing, other buildings, and its infrastructure in general. This was destroyed over the last week by the Israelis as they bombed Hamas’s extensive tunnel network that provided its fighters with mobility but Gaza’s citizens with little else.

Regionally, the 2021 War has to be regarded as a huge disappointment for Hamas. It succeeded in three ways: it showed that it would act when the Palestinian street felt that its claims to Jerusalem were being marginalized; it showed that it could continue to fire rockets at Israel throughout the conflict, no matter how much damage Gaza sustained; and it caused internal ruptures in Israeli society as traditionally mixed Arab-Jewish Israeli cities like Lod and Akko suffered devastating sectarian riots. Within the larger Middle East, however, Hamas got nothing but lip service, and precious little of that. There were some riots along the Israeli/Lebanese border and a couple of rockets fired at Israel from both Lebanon and Syria, none of which struck Israel, but there were few large-scale anti-Israeli protests in the Arab or Muslim world. Those mostly were reserved for London, Paris, and Toronto.

Has the Arab world moved on from the Palestinians? Or at least have the Arab states gotten so exasperated with the Palestinians eternal refusal to accept half-a-loaf (as Israel did in 1948) in order to establish an independent Palestinian state that the other Arabs no longer feel bound to limit their policies to placate the Palestinians? 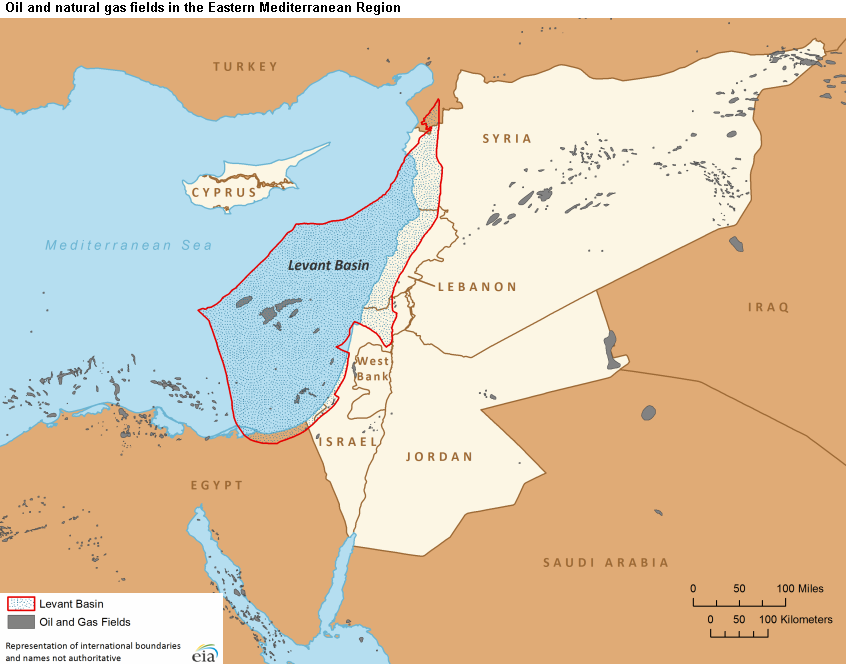 One indicator that might come in the very near future will be natural gas negotiations that have been underway intermittently between Israel and Lebanon. As reported frequently here, the discovery of large natural gas fields in the Mediterranean has been an energy, economic, and political game changer in the Middle East. Israel, which watched for decades as the Arab world played the “Oil Card”, now has key energy resources of its own, which it has developed and about which it has entered key partnerships with Greece, Cyprus, and Italy. Israel’s northern neighbor, Lebanon also has these resources, worth an estimated $6 billion.

Yes, natural gas just might solve yet another problem!

Greening Up (or Is It Down?)

Aaron Price offers up “Greening Up,” his latest work:

Oh!  Look at this check!
I weigh it against this bill.
I can pay for the added
Expense of Green living
With the turbine on my hill!

Oh!  Look at my dreams!
I’m a father, and I am so proud!
What a beautiful family I have;
My son and daughter get by
On part-time work now!

Greening up!
Greening up!
Everything is so Green!
I’m thrilled by my bills and my taxes!
I feel like carbon has captured me!

Our electricity is like my heart,
And just as sporadic.
A dollar is like a rubber band,
Now, it’s elastic.

If it can’t be spent,
It better not be saved!
I thank the turbine on the hill
For my world being this way!

Greening up!
Greening up!
Everything is so Green!
I’m thrilled by my bills and my taxes!
I feel like carbon has captured me!

Old friend Marcellus,
Yes, oh what a sad tale!
They locked you up tight;
You’re a dangerous menace,
There ain’t gonna be no bail!

Greening up!
Greening up!
Everything is so Green!
I’m thrilled by my bills and my taxes;
Has carbon captured you as well as me?

Hope you enjoy Aaron’s humor but don’t lose sight of the serious message either!