Readers pass along a lot of stuff every week about gas, fractivist antics, emissions, renewables, and other news relating to energy. As usual, emphasis is added.

Natural Gas and Solar Power: Together at Last

Our friend Dan Markind has a great piece in Forbes on the blending of gas with solar at the Pittsburgh International Airport to achieve a form of “sustainability.”

Pittsburgh International Airport (PIT) announced this week that it is establishing a microgrid to supply power at the airport, connected to the main electrical power grid in case of emergency but otherwise separate from it. 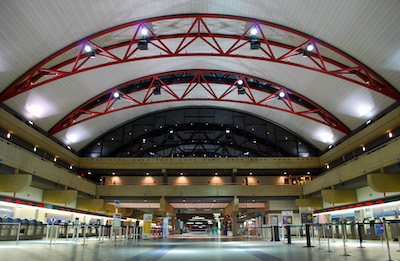 As microgrids are becoming increasingly popular in the United States due to their efficiencies and the ability to generate power even when the main grid is unavailable, this is not tremendously newsworthy per se. However, what is newsworthy is that most of the power for the microgrid will be supplied by the 14 producing Marcellus Shale natural gas wells at the airport, all of which will provide gas to five natural-gas fired generators. In addition, PIT will build an array of 7,800 solar panels. To construct and operate the grid, PIT entered into a 20-year agreement with utility Peoples Natural Gas, which will connect the gas wells, get the solar panels installed, and make a $30 million investment. PIT claims it will not pay out of pocket at all for the microgrid.

Reasonable folks will find Dan’s observations compelling; fractivists not so much, but that’s the way they operate, which is part of Dan’s point, of course.

No Signatory to Paris Climate Accords Has Come Close to US

Nice to see these remarks from our future DOE Secretary:

…Brouillette said that the country, under Trump, has managed to reduce emissions beyond other Paris treaty signatories while growing the American economy. 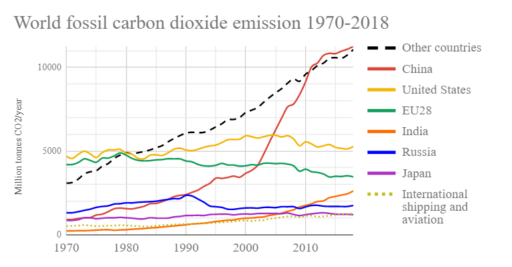 The energy deputy secretary said, “All of the gains that we have made are offset exponentially by the Chinese. It shows the fallacy of an agreement of the Paris Accords. We have reduced our energy-related emissions by 14 percent. That has been offset exponentially by the Chinese in probably a month or maybe a month and a half. They are making near-zero progress regarding these types of issues.”

The energy secretary nominee then noted that America’s growing Marcellus Shale natural gas developments have “fundamentally transformed the entire Appalachian region. If you were to hold that out as a country, it would be one of the largest energy-producing countries in the world. Appalachia alone.”

Brouillette said that Trump “is committed to developing infrastructure that would move” American energy to the market. However, many states, such as New York, have refused natural gas pipelines to areas such as Boston, Massachusetts. New York’s blocking of pipelines has led to a Russian oil tanker selling natural gas to Boston instead of Pennsylvania shale natural gas.

China has fooled a lot of wishful thinking fractivists and green true believers with its rhetoric, but the truly green progress is being made here in America, thanks to natural gas.

From the archives of the rapidly evolving revolt of the masses:

While activists are fighting to make natural gas appliances illegal, consumers continue to seek them out. Natural gas stoves, furnaces, and other appliances remain consumer favorites. According to the American Gas Association, in 2017, natural gas had 49 percent market share for both cooktop ranges and water heaters. 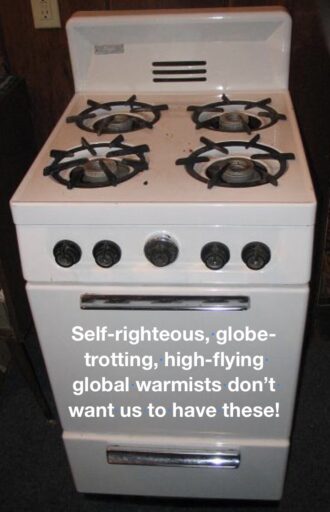 In part, this is because chefs and cooks at all skill levels prefer natural gas burners to electric stoves. Gas allows for quicker heat that can be more precisely controlled. In fact, one study of homebuyers in the Pacific Northwest found that 87 percent ranked natural gas service as important to them, largely because of price and cooking. They were also willing to pay a premium for natural gas over an all-electric home.

That presents a challenge for climate activists.

Although they see home appliances as the next step in their anti-fossil fuel campaign, research demonstrates that the costs would be high and emissions reductions minimal. Energy Information Administration (EIA) statistics show that residential natural gas use contributed less than 4 percent of overall greenhouse gas emissions in 2016. Meanwhile, the cost to replace these appliances with electric equivalents, with the resulting increase in demand for electricity, would raise annual energy costs between $1100 and $1400.

This hasn’t stopped local governments from across the country attempting to enact limits on new natural gas hookups. The Seattle City Council considered a ban on natural gas hookups in new buildings this fall. Meanwhile, in New York state, utility Conn Edison is struggling to find a way to connect new homes in New York City suburbs to a limited supply of natural gas. New England has resisted constructing new pipelines for years and the region is now strapped for supply. Boulder considered implementing a city natural gas tax earlier this year.

Everywhere one looks it is the same know-nothing, stuffed-chested, urban elites attempting to tell the people who produce their energy how to do it better for the sake of assuaging the former’s feelings of guilt at having done so undeserved well. Where’s my yellow vest, anyway?