It Won’t Do Any Good But We Can’t let That Stand in the Way!

Phil Murphy is not only a pander bear and global warming hedge fund hustler, but also a spinner of fairy tales:

The facility, on 200 acres adjoining the Salem County nuclear-power complex, will be the nation’s first purpose-built onshore site for servicing an industry that’s key to achieving the Murphy administration’s clean-energy goals, and contributing to a global target of cutting carbon emissions. 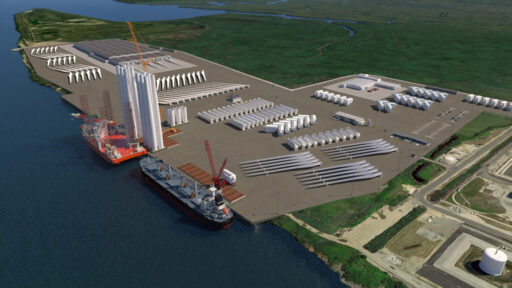 Just one week after the remnants of Hurricane Ida ravaged New Jersey with tornadoes and record rainfall, killing more than two dozen people, Murphy said the wind port showed that the state is serious about curbing climate change.

Recalling his visit last week to South Jersey homes crushed by a tornado, Murphy said there may be little that New Jersey can do on its own to reverse climate change, but that shouldn’t stop it trying.

“That sort of reality may be part of our today, but we must do all that we can to prove our unwillingness to deny climate change,” Murphy said. He said the state should attack climate change “head-on” so that future generations can enjoy a habitable world.

Talk about vacuous! “We shouldn’t stop trying…to prove our unwillingness to deny climate change,” he says. So, Phil, it’s all about virtue signaling, then, right? Thanks for admitting it, but we know you’re really in it for the money, our money you intend to steal as green government rent and this is just a head fake.

Hey, Boris, You Should Allowed Fracking, But We’ll Sell You LNG!

Our late friend Nick Grealy from London, understood what the U.K. had; an absolute treasure of natural gas in the the huge thicknesses of the Bowland Shale in Lancashire. The damned thing is an astounding 5,000 feet thick! But, Boris Johnson, the phony Tory opportunist who wanted to solidify his political position by selling out his most logical friends, cancelled the whole thing by ending fracking. This is what he has wrought:

CF Industries Holdings, a top manufacturer of hydrogen and nitrogen products, released a statement today indicating that its Billingham and Ince, UK, manufacturing facilities suspended operations “due to high natural gas prices.” There was no timeframe on when the plants would reopen. But reasonably, one would suspect when gas prices come back down.

Jim Reid, the chief credit strategist at Deutsche Bank, told clients today that in the “26 years of having a Bloomberg terminal, I’ve never pulled up so many gas price graphs as I have over the last 24 hours.”

Reid is looking at benchmark UK natgas front-month contract has risen almost 400% since March, from 40 pence per megawatt-hour to 194 pence intra-day, before closing around 164. 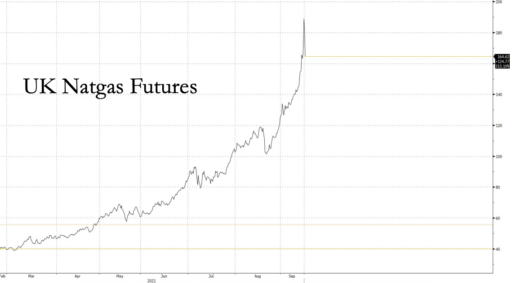 The credit strategist describes tight supplies as a significant driver in the melt-up of gas prices, stemming from dwindling Russian gas flows to Europe.

He also noted power prices are rising as Europe’s transition to a low-carbon future hit a stumbling block as wind speeds in the North Sea are among the slowest in 20 years, idling turbines.

CF’s plants produce ammonium nitrate fertilizers that are made from natgas.

“There’s also a fight for supplies of liquefied natural gas, with Asia buying up cargoes to meet its own demand…” according to Alexis Maxwell, an analyst at Bloomberg Intelligence…

All of this is feeding into inflation on a global scale and is getting out of hand. To curb out of control European natgas prices, Germany has to certify Russia’s Nord Stream 2 to begin shipments – but as we noted earlier today, that could take months and may mean inventories on the continent aren’t resupplied in time for winter.

Tough luck, Boris. Too bad you’ll now have to buy our LNG, produced in places such as Susquehanna County, when you could have producing your own natural gas, but for your cynical politics.

From our friends at API:

In 2020, The Environmental Partnership launched its latest environmental performance program, which is focused on reducing flaring of associated gas in oilfield operations. As part of the flare management program, companies are advancing best practices to avoid flaring and minimize emissions. To gauge progress, participants in the program have committed to report data to calculate flare intensity, a measurement of flare volumes relative to production. Participants reported a 50 percent reduction in flare volumes from 2019 to 2020, even as oil and natural gas production remained consistent among participating companies. This progress underscores the industry’s commitment to advancing best practices to reduce flare volumes, promoting the beneficial use of associated gas and improving flare reliability and efficiency….

Flare volumes reduced more than 50 percent from 2019 to 2020, even as oil and natural gas production remained consistent among participating companies. Participating companies reduced the gas flare intensity of their operations 3.04 percent in 2019 to 1.49 percent in 2020. More than 171,000,000 MCF of flare gas was avoided or diverted from flaring for beneficial uses. 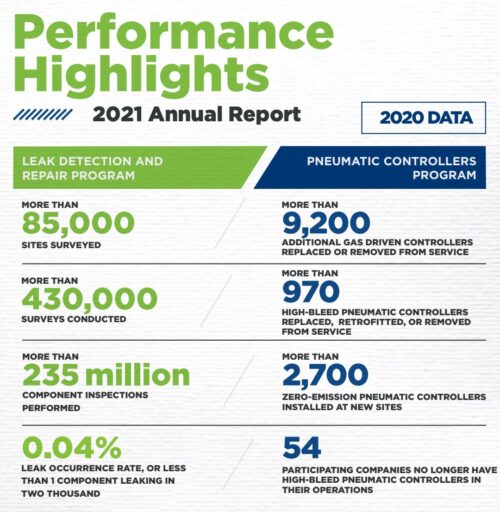 More than 430,000 surveys were conducted across more than 85,000 production sites. The surveys found that of the more than 235 million component inspections performed, only 0.04 percent needed repair.

More than 970 high-bleed pneumatic controllers have been replaced, retrofitted or removed from service by the companies participating in the program – a significant step to reducing GHG emissions. Notably, 54 participating companies in the program reported they suspended use of high-bleed pneumatic controllers in their operations. The partnership expanded this program to address emissions from all gas-driven controllers, not just high-bleeds, leading to the removal of more than 9,200 additional gas-driven controllers and installation of more than 2,700 zero-emission controllers.