Natural gas was a clear winner: 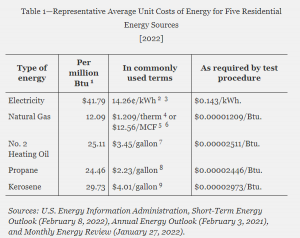 The forecast shows that natural gas costs less than 30 percent of what electricity does per million Btu. It also notes that the national average cost of electricity is 3.4 times than that of natural gas, a factor that needs to be considered by policymakers pushing for electrification.

This DOE’s analysis supports what industry sources have already been saying—homes with natural gas appliances spend less on energy than those that use electricity, propane, or heating oil for heat. The American Gas Association’s 2022 Playbook recently that households using natural gas for heating, cooking, and drying clothes save an average of $1,401 annually over home using electricity for those appliances.

“America’s natural gas is a strategic and essential asset for our country and the world. The Department of Energy’s analysis confirms the cost-advantage of natural gas. Our nation’s domestic abundance of natural gas means customers know they can count on its affordability, and our vast delivery infrastructure means reliability. This the foundation for a stronger, cleaner energy future for our nation.”

And, because much of the natural gas used in the United States is produced domestically, consumers have been shielded from some of the price spikes hitting Europe and Asia in the wake of the Russian invasion of Ukraine. Though energy prices are increasing worldwide, Americans are still paying far less for natural gas than Europeans. While natural gas sold for a record $100 per MMBtu on Monday in Europe, Henry Hub prices in the United States remained below $5.

While energy markets remain volatile, natural gas continues to be the most reliable and affordable fuel for home appliances.