If you have watched the current natural gas price posted to the right on this blog every day, you have noticed a big change over the 15 months following Joe Biden’s occupation of the White House. It was $2.57 per 1,000 cubic feet then and is now $7.82. Prices have steadily escalated—more than tripled— as the Biden puppeteers have made move after move to restrict, smother and trash the oil and gas industry.

Now, the bill is coming due. Cold temperatures, high LNG demand from allies seeking an alternative to Russian gas and a lack of infrastructure to move the product to market and to natural gas storage for later use have constrained the domestic supply and raised the price in the face of increased winter demand, even though production has increased 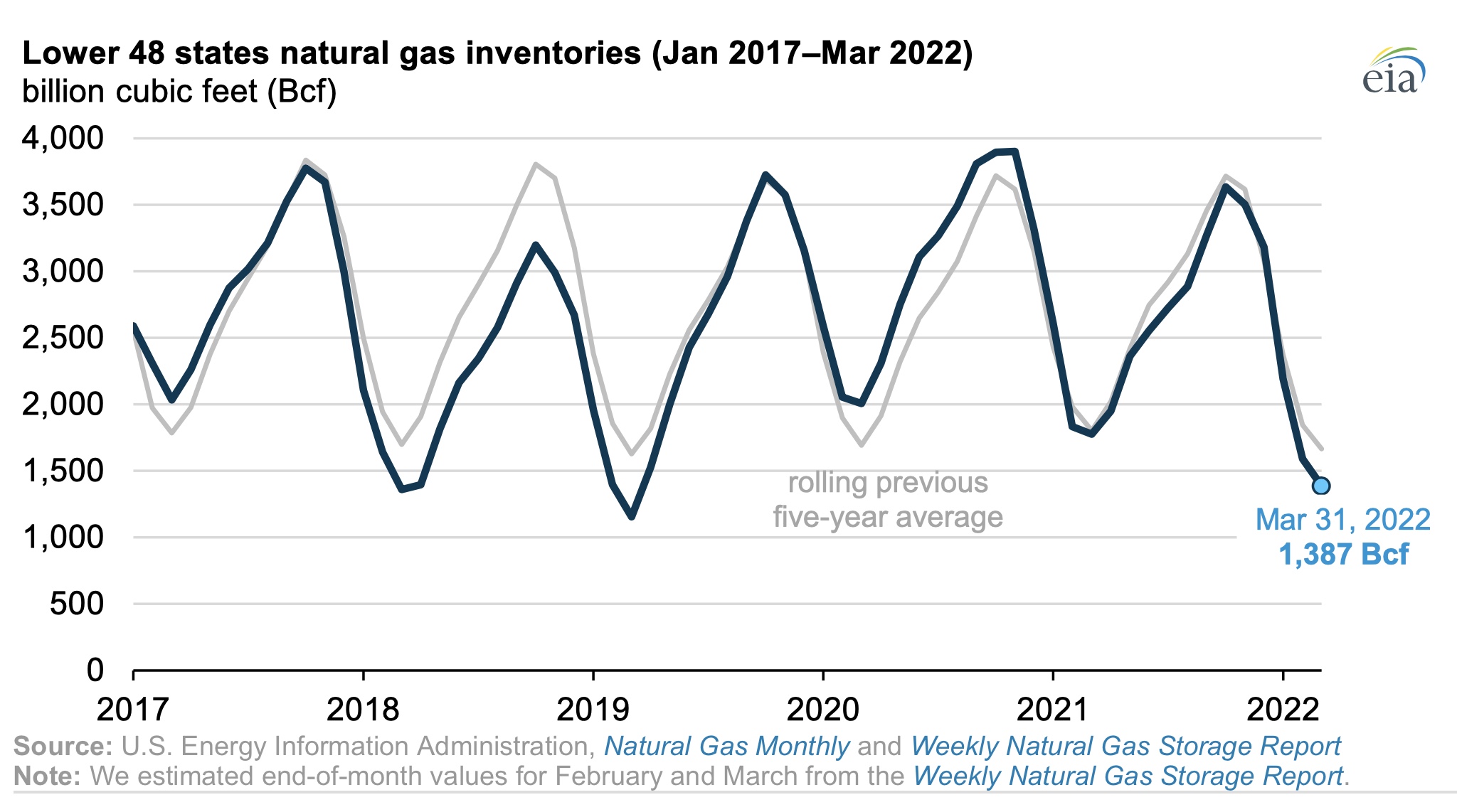 The following information is from the Energy Information Administration and what’s happened on the natural gas storage side of the ledger (emphasis added):

Increased heating demand for natural gas this past winter resulted in more withdrawals from U.S. natural gas storage than normal. By the end of March, the least amount of natural gas was held in U.S underground storage in the Lower 48 states since 2019.

Working natural gas in underground storage facilities in the Lower 48 states totaled 1,387 billion cubic feet (Bcf) as of March 31, 2022. Inventories were 17% lower than the previous five-year average (2017–21) for that time of year, according to our Weekly Natural Gas Storage Report.

Temperatures were relatively mild across the United States from October through mid-January. Net withdrawals from underground storage facilities in the Lower 48 states during January totaled 991 Bcf—the most natural gas withdrawn from storage during any January since 2012. In January 2022, population-weighted heating degree days (a measure of how cold weather is) were 9% higher than the previous 10-year average, which led to higher-than-normal withdrawals in January.

“The most natural gas withdrawn from storage during any January since 2012.” Now, imagine what it will be like with a truly cold winter and even more demand for our LNG as Europe confronts the reality and danger of dependence on Russia. Germany and friends need our gas because they cannot go on funding sides of the Russia-Ukraine conflict. That’s the absurd situation they now find themselves in as they send help to Ukraine to fight back against the Russians as they send rubles to Russia to get gas.

These are the hard facts; declining natural gas storage inventories is a measure of the decline in sanity of Western energy policies here and in Europe.