Has Nero been reincarnated in Joe Biden? It certainly appears so as his controllers are deliberately burning down the West and he fiddles his time away?

“I can’t believe this is happening.”

How many of you, like me, have repeatedly exclaimed this in the last year? We have watched as Joe Biden, the hologram projected on the stage by some hidden wizard hidden behind an impenetrable black titanium curtain, has taken every imaginable anti-American position on everything of significance to our lives? We are audience members reluctantly pulled onto the stage as sporting actors in a nightmarish Shakespearian tragedy about the collapse of the West as a modern-day Nero by the name of Joseph Robinette Biden, Jr. fiddles away on a violin that exists only in his imagination, his hands and fingers plying the air as if it were pantomime when it’s all too real. Yes, Nero has been reincarnated. 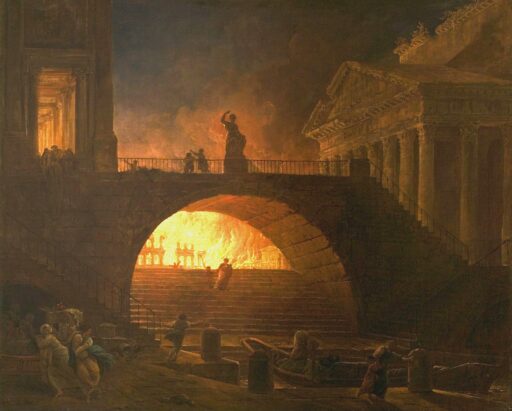 Is the Nero analogy a stretch? Only if you fail to see what’s happening all around us:

Add social issues to the list and it doubles. It’s one disaster after another; trouble wrapped in distress and tied with a big red ribbon of bloody devastation. Our Nero, though, is out of it, living in his own ever smaller world, sans thoughts, sans understanding, sans any cares beyond playing the role he’s accepted and seeking a few plaudits for his fiddling as the USA and the West burn to the ground.

How bad has it gotten? Well, consider this little example from a science publication called “The Journal of Clinical Oncology,” which demonstrates just how badly science has been corrupted, like every Western institution (emphasis added):

In April 2021, President Biden pledged to drastically reduce greenhouse gas (GHG) emissions by 50% relative to 2005 levels by 2030. This ambitious agenda will inevitably require significant changes across the breadth of the United States economy, including the health care sector.

According to previous studies, the health care industry accounts for roughly 8.5% of total GHG emissions in the United States (the most in the world in per-capita and absolute terms), and in recent years, the provision of cancer care has increasingly been included in discussions about decarbonization.

We believe that surgical oncologists are a crucial stakeholder community in the implementation of associated priorities for two reasons.

First, owing to the prevalence of consumables, heating, ventilation, and air conditioning (HVAC) systems, volatile anesthetic gases, and sterilization processes, operating rooms (ORs) partially account for 70% of a hospital’s waste and are three to six times more carbon-intensive than the hospital as a whole, according to a 2017 life cycle analysis.

In 2014, the release of hydrofluorocarbon and chlorofluorocarbon anesthetic gases stood at the equivalent of 3 million tons of carbon dioxide, with 80% of emissions from desflurane alone.

Second, carbon-intensive minimally invasive surgical approaches, that is, laparoscopic and robotic-assisted, have become mainstays in the management of several cancers, for example, uterine, oropharyngeal, colorectal, and prostate.

For example, the robotic hysterectomy has been associated with a carbon footprint of 814 KgCO2e, commensurate with a 2,273 mile journey in a gasoline car.

This is salient because the adoption of robotic-assisted procedures increased eight-fold from 2012 to 2018 and overall minimally invasive surgical activity in the United States is associated with total CO2 emissions of 355,924 tons per year, synonymous with a country-level ranking of 198th among UN member states…

The well-established adverse planetary impacts (eg, rising temperatures, increased frequency, and severity of extreme weather events) of GHG emissions have been associated with an annual loss of 470,000 disability-adjusted life years and $820 billion US dollars in health care costs in the United States. Locoregional examples are also compelling as the 2012 Hurricane Sandy natural disaster of New York and New Jersey was associated with 273 premature deaths, > 4,500 emergency room visits, > 6,600 hospitalizations, and $3.3 billion US dollars in health care expenditures. Although these results do not explicitly distinguish between human activity-related climate changes and natural long-term climate cycles, they sufficiently frame the scope of the problem…

In conclusion, in many respects, climate-sensitive practices can be viewed as health-promoting practices in light of the negative impact of the current climate crisis on health care outcomes. The surgical oncology community has a vested interest in building resiliency against climate change, and we hope that the present article will help galvanize surgical oncologists to become more attentive to the adoption of such actions in their own practices and more forceful advocates for climate resiliency to policymakers, hospital administrators, peers, and the lay public.

Joe Biden, of course, didn’t write this, surely doesn’t know of it and wouldn’t remember a bit of it if he did read it. But, the climate cultists know they want to burn down the West as we know it and replace it with a corporatist-socialist government by, of and for elites. Joe Biden is their Nero, one who will merely fiddle as it all takes place. So, they’re taking this opportunity to launch one last final attempt to achieve the sort of Armageddon they have in mind as a prelude to Utopian rule. They are infesting everything they can wherever they can and now we have this absurdity where life-saving cancer treatments are supposed to adapt to a climate agenda for which there is only the remotest scientific support. It isn’t science. It’s advocacy; disgusting political advocacy for a pet cause built on the same foundation of sand.

Naturally, I could be wrong, Steve Koonin, the author of “Unsettled” could be wrong. Or, everyone could be wrong, but we are all entitled to our opinions. Moreover, debate—that is to say free speech among the multitudes—is the only way to reach anything approximating the truth and, importantly, political acceptance. Yet, our Nero, if he even knows what’s happening, has been manipulated into creating a “Disinformation Governance Board.” As if none have ever heard of George Orwell or his “Ministry of Truth.” The purpose is plain; to exercise the police power to end debate, shut down speech and intimidate all who imagine they ought to be able to say what they believe and offer up the evidence they possess for others to evaluate. More specifically, it is intended to deny anyone the choice to read such as I’m writing here or anything else critical of Joe Biden and the wizard behind him.

We live in peril with every basic right we thought we held forever at risk of being destroyed as Nero fiddles.