[Editor’s Note: New England, once the home of old-fashioned common sense, has become a demonstration of total political insanity as it imports LNG rather than build pipelines.]

Natural gas-starved New England, which lacks sufficient natural gas supplies because politicians like Massachusetts Attorney General Maura Healey (taking over as Governor come Jan. 1st) blocks new pipelines, is satiating its ever-growing thirst for natural gas by importing it from foreign countries at 5-6X the cost of shipping it in via pipeline from the nearby Marcellus. In fact, a shipload of LNG from Trinidad and Tobago was unloaded at Constellation Energy Corp’s Everett LNG import terminal last week.


Everett is paying somewhere in the range of $35/Mcf for imported natural gas, versus paying $6/Mcf for nearby Marcellus gas. Why? When you figure that out, perhaps you could let us know too. We call it leftist insanity. They have completely left their senses. They still need the gas and will need it for years (decades) to come, yet they refuse to allow new pipelines to be built to flow it–preferring to pay many times more for foreign gas. 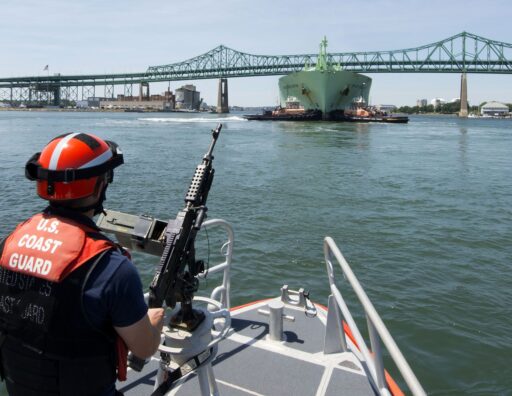 New England could get a load of much needed liquefied natural gas (LNG) for the winter heating season in coming days from a vessel full of the super-cooled fuel that is sitting in Boston Harbor.

New England depends on LNG and oil to fuel some power plants on the coldest days when most of the region’s pipeline gas is used to heat homes and businesses.

About half of the power generated in New England comes from gas-fired plants.

The Cadiz Knutsen is sitting in Boston Harbor outside U.S. energy company Constellation Energy Corp’s Everett LNG import terminal in Massachusetts with a cargo of LNG from Trinidad and Tobago.

That would be the first LNG vessel to visit Everett since August, according to Refinitiv data.

But with Everett competing with European buyers willing to pay around $35 per million British thermal units (mmBtu) for gas compared with just $6 in the United States, the Massachusetts port has imported only 16.7 billion cubic feet (bcf) of gas as LNG during the first 10 months of this year.

When U.S. energy company Exelon Corp owned the Everett LNG facility, Exelon said it used the terminal to import fuel for its Mystic power plant. Exelon also said it sold some LNG to utilities throughout New England to help them meet their peak demand needs.

Sticking with the theme of New England’s LNG import facility, Constellation Energy Corp’s Everett LNG, a story appearing on S&P Global Commodity Insights says unless the Federal Energy Regulatory Commission (FERC) acts soon, the Everett LNG import facility near Boston likely will close down after 2024. Why? Following a federal court ruling, Everett can no longer pass along nearly all of its operating costs to Constellation’s Mystic Power electricity customers. Everett is not willing to sign new contracts with various customers because it doesn’t know how much it can/must charge them (to recoup operating costs), and how much it can pass along to Mystic Power customers.


FERC previously ruled that Mystic Power can pass along most of the costs from Everett LNG (91%) to Mystic Power ratepayers. Mystic is a 1,413-megawatt (MW) gas-fired power plant–the largest gas-fired power plant in New England. In August, the U.S. Court of Appeals for the District of Columbia Circuit (D.C. Circuit) found that FERC acted “arbitrarily and capriciously” when it allowed nearly all of Everett’s operating costs to be recovered from Mystic ratepayers. The court partially vacated and remanded the underlying FERC orders.

To protect New England fuel security, the Federal Energy Regulatory Commission should promptly explain which costs of the Everett LNG facility can be recovered through Constellation Mystic Power’s rates, so that Everett knows how much to charge third parties for gas, Mystic said in an emergency motion.

The current regulatory uncertainty means that Everett is conservatively pricing gas deals, decreasing the chance of third-party sales that could support the viability of the Massachusetts LNG terminal beyond 2024, according to the motion filed by Mystic and Constellation Energy Generation.
If the LNG terminal shuts down due to a lack of sales, “[t]hat would create much larger reliability problems for both electric and gas service in New England over the coming years,” according to the motion (ER18-1639) posted by FERC late Nov. 22.

Everett is capable of supplying 35% of natural gas demand on peak winter days in New England, where gas supplies are already constrained, the motion said. And the region faces prospects of a winter storm crisis where both electric and gas service are interrupted, according to the motion. “The stakes are high,” the motion said.

The issue revolves around a reliability-must-run, or RMR, agreement to keep the Mystic gas-fired units running from June 2022 to May 2024. That agreement also helps Mystic recover the bulk of the costs associated with the Everett facility, which fuels the power plant.

In August, the US Court of Appeals for the District of Columbia Circuit found that FERC acted arbitrarily and capriciously when it allowed nearly all of the Everett’s operating costs to be recovered from ratepayers. The court partially vacated and remanded the underlying FERC orders (Constellation Mystic Power v FERC, 20-1343).

There is strong interest from local distribution companies to sign up for gas from Everett, the motion said. But, because FERC has not acted on the DC Circuit’s remand, Everett faces regulatory uncertainty that interferes with its ability to enter commercial arrangements, the motion said.

Regulatory uncertainty from the remand also affects the viability of Everett after the Mystic agreement ends in 2024, the motion said. If the facility does not enter into arrangements to support continued operations by the Spring or early Fall of 2023, Everett will likely shut down at the end of the Mystic deal, the motion said.

Mystic asked FERC to resolve two issues by Jan. 9. The first issue concerns the amount of Everett’s fixed costs that will be recovered from Mystic and its customers. The second issue involves whether, if Everett continues operating after the Mystic plant shuts down, ratepayers can claw back costs that Everett recovered by selling fuel to Mystic during the RMR deal, the motion said.

FERC should maintain its plan to allocate 91% of Everett’s costs to Mystic, and continue to reject the clawback, the motion argued. However, Mystic is willing to restore an additional credit under which Mystic customers would receive a share of the margin earned from forward transactions, the motion said.

Because resumption of such margin sharing would resolve cost causation issues, there can be no credible claim that more is needed, especially in light of other existing credits, Mystic said.

At least New England can import foreign LNG so the lights won’t go out. That is, unless FERC fumbles the ball, and then the lights will go out after 2024. What a mess. If only New England politicians would allow a pipeline or two from the Marcellus to flow extra (cheap, abundant, clean) volumes of methane to their region…

Editor’s Note: This post is a combination of two on Jim’s site yesterday and, as he notes, it displays the complete insanity of energy politics as radicals, serving, knowingly or unknowingly, as shills for green grifting corporatists deliberately attempt to destroy the everyday lives of commoners for the sake of ideology, political power and, most of all, riches obtained from those they would destroy. We are living in a world of elites who care not a whit about the fate of the common man other than that he continue to subsidize them.