The New Fortress export facility is being fought by the Delaware PovertyKeeper because it’s key to so much regarding natural gas.

Our buddy, Jim Willis, from Marcellus Drilling News, has an excellent piece explaining so much of why the Delaware PovertyKeeper a/k/a Riverkeeper is so adamantly opposed to the New Fortress export facility in New Jersey and is doing what it can to tie the DRBC up in knots over it. It’s lengthy and complicated, but well worth reading to understand the importance of this facility. New Fortress is the keystone to so much of Appalachian gas development. 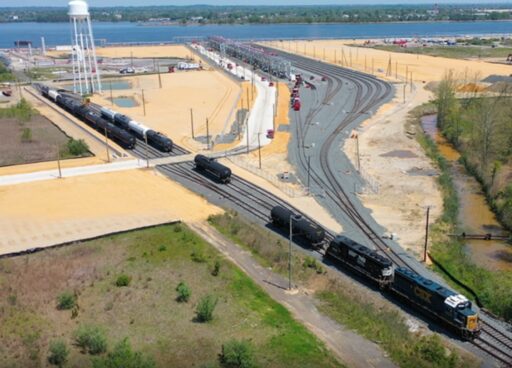 Because the article, which embeds material from other articles, is so detailed, I have summarized the essential points with excerpts below:

New Fortress Energy [plans] to build an LNG liquefaction plant in Bradford County, PA (northeastern part of the state), and then haul the LNG from the plant via specially-outfitted trucks and rail cars to a transloading dock/port facility New Fortress plans to build at an old DuPont dynamite factory site [colloquially known as the Gibbstown or Repauno site] in New Jersey, on the banks of the Delaware River. What we didn’t know, until now, is that the old DuPont site will also function as a transloading facility for LPG, or liquefied petroleum gas (i.e. propane)…

We’ve been a bit confused because New Fortress uses a number of subsidiary names. Fortress Transportation and Infrastructure Investors (part of Fortress Investment Group) is the company [developing the] site. Delaware River Partners is another name that’s used and is the name listed as the owner of the site…

Here’s the new news: Delaware River Partners, aka Fortress Transportation and Infrastructure Investors, has been hard at work at the Gibbstown/Repauno site because they plan to not only ship LNG, but also LPG. Delaware River Partners is repurposing an underground storage cavern formerly used to store ammonia to instead store LPG.

Delaware River Partners has, amazingly, already completed more than $100 million in improvements to the site! Those improvements include constructing a deepwater dock and, most recently, constructing a 40-tank-car rail-to-ship transloading facility. So, even though the LNG export dock is not yet built and has been delayed by the Delaware River Basin Commission dragging its feet, these other bits for the LPG have gone forward. This is big news for us.

And get this: LPG will begin moving through the export facility “in the spring of 2021.” That’s great news! Although it’s not LNG (methane) from northeastern PA, it is LPG (propane) and it will no doubt come from the Marcellus/Utica region…

Here’s the RBN story that delves into the Gibbstown Logistics Center, aka Repauno Port & Rail Terminal:

“Over the past 10 years, there’s been a 14-fold increase in U.S. LPG exports: from 132 Mb/d, on average, in 2010 to 1.85 MMb/d so far in 2020. That extraordinary growth in export volumes couldn’t have happened without the development of a lot of new, costly infrastructure — everything from gas processing plants, NGL pipelines, and fractionators to LPG storage capacity, marine terminals, and ocean-going gas carriers. And that build-out continues, not only along the Gulf Coast but on the shores of the Delaware River near Philadelphia. Energy Transfer has been working to expand the throughput of its Marcus Hook terminal on the Pennsylvania side of the river, and Delaware River Partners, an affiliate of Fortress Transportation & Infrastructure, will soon be transloading LPG from rail tank cars onto ships across the Delaware in New Jersey…

Fortress acquired the cleaned-up site in 2016. The 1,600-acre parcel has a number of noteworthy features, the most unusual of which is a 186-Mbbl underground storage cavern that was carved out of a layer of solid granite in the 1960s — the same granite layer from which the caverns in nearby Marcus Hook were created. The floor of the Repauno cavern is about 350 feet below the surface and the ceiling about 20 feet above the floor. DuPont used the underground space to store anhydrous ammonia; Delaware River Partners cleaned the cavern and, after a mechanical integrity test, repurposed it to store LPG.

The GLC site also offers easy truck access to two key interstate highways — I-295 and I-95 — and is served by Conrail, which connects directly to the CSX and Norfolk Southern railroad systems (dashed yellow and dashed green lines, respectively). We understand that Delaware River Partners has completed more than $100 million in improvements to the site, including the construction of a deepwater dock and, most recently, a 40-tank-car rail-to-ship transloading facility that was finished last month (see photo below). Since May 2017, the company has been operating GLC as a regional LPG distribution center, generally building a stockpile of LPG during the warmer months and selling LPG to buyers within a 100-mile radius during the colder months. As we hinted at above, LPG can be delivered to the site — and sent out from it — by truck or rail.

With the new deepwater dock and transloading facility, Delaware River Partners soon will be able to begin loading LPG onto ships for export. Gas carriers with a draft of up to 40 feet when fully loaded will be able to use the dock. As we understand it, the facility is designed to accommodate Handysize gas carriers with a capacity of about 150 Mbbl, and it will take 2 or 3 days to fill a fully or partially semi-pressurized or pressurized vessel of that size with LPG. The developer has stated that GLC’s export capacity is 26 Mb/d. It also has secured permits to install a new and larger second dock that would be capable of receiving two more gas carriers at a time, but those valid permits face legal challenges…

We should note that the GLC project is not Fortress’s first rodeo. The company holds a roughly 60% ownership interest in Jefferson Refinery, an energy infrastructure company that developed and owns a large, multi-modal crude oil and refined products terminal at the Port of Beaumont in Texas. Fortress also owns a half-stake in the Long Ridge Energy Terminal, which is located along the Ohio River in Monroe County, OH, and Wetzel County, WV — the heart of the Marcellus/Utica. Among other things, Long Ridge offers storage and transloading for NGL and frac sand, as well as a short-line railroad connection to the Norfolk Southern system.”

After reading the above, we went looking for a transcript from the conference call for Fortress Transportation and Infrastructure, and found it. Adams [after discussing propane plans] continued on, talking about “Long Ridge” and the light bulb finally went off for us. We connected the dots. The Long Ridge Energy Terminal located in Monroe County, OH (transloading facility) is owned by Fortress Investment Group, aka Fortress Transportation and Infrastructure. We recently brought you the news that Long Ridge, which is building a natural gas-fired electric plant, will mix hydrogen in with the natural gas in a first-of-it’s-kind hydrogen/gas plant in the U.S..

Adams had this to say about Long Ridge:

“As a result of Long Ridge’s strategic location in the core of the Marcellus and Utica shale regions, one of our largest customers has indicated interest in extending our existing contract for a five-year term and in addition in the third quarter Long Ridge signed a second two-year contract with a commodities trading company to transload and store road salt.

The power plant construction continues to be on budget, and is tracking to an earlier completion date in November 2021, which is guaranteed by our construction firm. Furthermore, we continue to see a high level of interest from power intensive industries looking to site new facilities at Long Ridge.

In addition, we have numerous ongoing discussions with data centers, whose interest is driven in part by our recently announced initiative with GE, a New Fortress Energy Zero Division to blend carbon free hydrogen as fuel for our power plant as early as next year. We’re very excited about this initiative as Long Ridge will be the first purpose built hydrogen burning power plant in the United States and worldwide to blend hydrogen in a GE H-class gas turbine.”

This is fascinating stuff, the kind of material you can only find at Marcellus Drilling News because Jim has a nose for the business of the gas business. What he has put together in this instance is the keystone role of New Fortress in bringing Appalachian gas development to fruition in the fullest sense. Pennsylvania farms are where it begins with natural gas lifted from the ground via fracking to later become LNG, LPG, hydrogen and opportunity for the Greater Philadelphia region, which includes New Jersey. Pipelines, trains, trucks and ships—all converging to export our Appalachian gas around the world and bringing economic progress home to rural and urban alike.