New Mexico Thrives As Oil Production Booms in the Permian

New Mexico Thrives As Oil Production Booms in the Permian

The Permian Basin has made New Mexico the nation’s second largest oil producer and Coterra’s Bill desRosiers reports on the remarkable growth and success.

The annual Carlsbad Mayor’s Energy Summit, held October 20th in Carlsbad, New Mexico, started over a decade ago to bring together community and business leaders to learn more about what is coming down the road with the energy industry.

The event’s theme was The Permian Basin: The Heart of Domestic Production, and the content of discussions stood up to that narrative. Carlsbad Mayor Dale Janway welcomed nearly 500 guests to the Summit by sharing, “we hope to get a better understanding of where the industry is now and how Eddy and Lea County are national leaders when it comes to domestic drilling.” The Mayor finished his remarks with a rousing declaration, “the future of our domestic drilling goes through busy southeast New Mexico!” 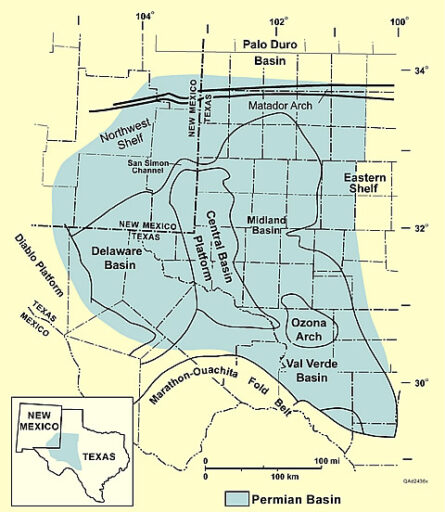 Greg Bloom is the Assistant Commissioner for Mineral Resources at the New Mexico State Land Office. This group oversees the Oil, Gas, and Minerals Division, the Water Bureau, and the Royalty Management Division. Greg shared the following insights:

Greg ended his comments with, “it’s no wonder nearly one-third of national oil production comes from the Permian Basin when New Mexico’s growth is combined with Texas’s robust production!”

Doug Ackerman, president and CEO of New Mexico Oil and Gas Association, built on Greg’s comments by explaining how last year, “Revenue grew $500 million on the strength of production and a rebound in market prices, generating over $5.3 billion in state and local tax revenue during the year,” which was the highest in New Mexico history.

Doug was joined on stage by Ben Shepperd, President of the Permian Basin Petroleum Association, and Jim Winchester, Executive Director of Independence Petroleum Associates of New Mexico. Together, the trio discussed industry efforts and successes through Trade Associations. They also highlighted how the state’s oil and natural gas industry supports almost 135,000 jobs, over 100 rigs, and thousands of businesses, many of which are local and family-owned. This group concluded their remarks with a reminder to vote this November. More information on voting can be found in our recent blog post.

Robert G. Schwiers Jr., Chief Economist for Chevron’s Strategy & Sustainability Department, delivered the keynote address on behalf of the energy companies present at the Summit. Robert detailed the Permian’s importance in meeting society’s expectations for energy security despite current geopolitical and economic turmoil. He also quantified the Permian carbon intensity versus other oil and gas fields around the world.

Coterra was a proud sponsor of this event. Sponsorship dollars went toward offsetting the cost of hosting the Summit. Funds were also allocated to the Carlsbad Community Foundation to support its non-profit efforts in the region.