As I watched the Texas energy debacle unfold the last several days, I thought that I would end up posting an article about the implications for New York’s Climate Leadership and Community Protection Act (CLCPA).  This is my first response. It is becoming clear that the rolling blackouts and exorbitant electric prices that occurred in Texas were related to a lack of market support for diversity and resilient generation. There is no question in my mind that the CLCPA electric system envisioned by the Climate Action Council will be even less diverse and resilient so something similar in New York is inevitable if the transition unfolds as I expect.

I have written extensively on implementation of the CLCPA closely because its implementation affects my future as a New Yorker.  I have described the law in general, evaluated its feasibility, estimated costs, described supporting regulations, listed the scoping plan strategies, summarized some of the meetings and complained that its advocates constantly confuse weather and climate.  The opinions expressed in this post do not reflect the position of any of my previous employers or any other company I have been associated with, these comments are mine alone.

As I write this on February 18, 2021 the causes of the electric system problems in Texas are unknown.  What is certain is that power outages left millions in the dark and without heat when a bitter cold snap brought snow, ice and temperatures in the single digits.  Electric loads hit record levels even as the electric system operators instituted rolling electric outages to reduce the power used in order to prevent even bigger blackouts.  There also appear to be issues with the generators not being able to provide enough power.  The wind resources were way down because of icing but apparently the natural gas fired units had trouble getting sufficient gas to run because the priority was for residential use.

I have one anecdote that may be relevant.  When New York State deregulated the utility companies and I left Niagara Mohawk Power Corporation to go with NRG Energy who purchased the fossil plants I supported, one of the cultural awakenings was going to other power plants across the country.  One vivid memory was a visit to the massive Parish power plant outside of Houston and being able to see all the infrastructure.  I have heard that visitors from the south were also similarly impressed when visiting northern power plants and not being able to see all the infrastructure because the power house was enclosed.  The reason northern power plants are enclosed because trying to run a power plant when things freeze is very difficult.  I have heard that there are indications that monitoring equipment and water lines were failing due to the cold Texas weather.

One other note is that claims that these impacts were somehow due to climate change and not inadequate planning for this kind of extreme weather event are complete baloney.  Ten years ago, in February 2011, there was a similar extreme cold snap and blackouts also resulted because “coal and natural gas plants and electric utility companies didn’t have the resources to maintain service.”  If these conditions happened ten years ago then the root cause is weather and not climate.  Anyone claiming otherwise is ill-informed, naïve or lying.

The 2001 draft was the oldest energy plan I could find.  You will have to trust me when I say that everyone involved in this energy plan and earlier iterations, took as a fundamental principle that diversity meant a balanced and diverse portfolio with different kinds of dispatchable electric energy: coal, natural gas, oil, nuclear, and hydro.  The greater diversity mantra included different ways to transport oil and coal including railroads and barges as well as the ability to have fuels that could be stored for use as needed.

Arguably New York’s concern for reliability and avoiding blackouts is linked to New York City blackouts and the looting and vandalism that occurred during the 1977 blackout.  After every blackout extensive steps were taken to prevent a re-occurrence due to the same conditions and, more importantly, drove self-examination to address similar situations that might cause blackouts.  Although this process improved resiliency that term was not in use in 2002 and it was not used once in the draft energy plan.

Texas Lessons for the CLCPA

Alex Epstein summarized the resiliency problems that caused the Texas energy debacle in the following tweet and provided more details on his blog. 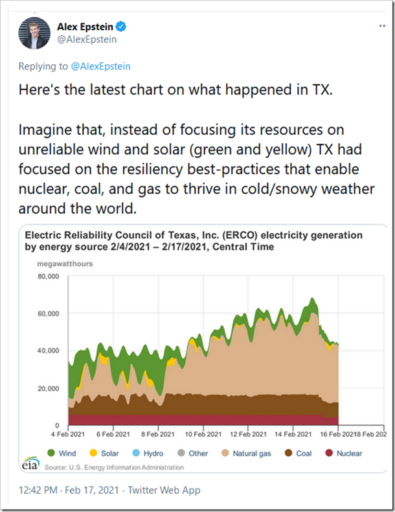 In my opinion the Texas debacle occurred because the energy regulators failed to manage the system to address the problems that occurred in 2011.  Epstein persuasively explains that a large part of the reason that they did not address those problems was because energy policy priorities were hijacked to policy that has prioritized the adoption of unreliable wind/solar energy over reliable energy.

A former electric utility Planning Engineer has described his impression of the problems that lead to the debacle.  He thinks that the particular problem is that Texas only pays for the energy produced.  As a result, there is no incentive to develop the capacity needed for rare extreme conditions so when it was needed it simply was not there.  The purpose of the payment for energy only market strategy was “to aid the profitability of intermittent wind and solar resources and increase their penetration levels.”

It appears to me that the same mis-guided policy priorities are underway in New York with the CLCPA.  Planning Engineer explains that “Having a strong technical knowledge of the power system along with some expertise in finance, rates and costs can help one see the folly of a variety of policies adopted to support many of today’s wind and solar projects. Very few policy makers possess anything close to the skill sets needed for such an evaluation. Furthermore, while policy makers could listen to experts, their voices are drowned out by those with vested interests in wind and solar technology who garner considerable support from those ideologically inclined to support renewables regardless of impacts.”  This describes New York’s Climate Action Council and advisory panel process perfectly.

What About New York?

In the early afternoon of February 15, I found out about the Texas problems and on a whim checked the New York Independent System Operator real-time dashboard to see what how much wind energy was available from the 24 facilities and nameplate capacity of 1,985 MW.  In hour 12 the entire on-shore wind fleet of New York generated 2 MWh.  Later I downloaded data and found that from 2/14/21:2300 until 2/15/21:1600 there were 15 of 17 hours when the wind output was less than 10% of the nameplate capacity and totaled New York’s on-shore wind turbines produced a total of 765 MWh for a capacity factor of 2.6%.

What about solar?  The NYISO does not provide solar generation data like it does for wind.  However, we know that nine hours were basically dark so there was no solar.  The CLCPA goal is 6,000 MW by 2025. That much solar and New York’s 2020 on-shore wind turbines that produced a total of 519 MWh those nine hours results in a pathetic capacity factor of 0.7%.  I also used the NYS Mesonet data to estimate that the total solar insolation available on February 15 was around 16% of the insolation available at the peak of availability near the summer solstice when the days are longest.  Clearly relying on wind and solar when these conditions occur is going to be a challenge because energy storage will be required to bridge the gap.

In 2040 all electricity currently produced by fossil fuels is supposed to be produced by zero emissions sources.  The “vested interests in wind and solar technology who garner considerable support from those ideologically inclined to support renewables regardless of impacts” intend that the replacement power will come from wind and solar.  Over the entire 17-hour winter doldrum fossil units produced 1,424,942 MWH and during the no-solar 9-hour period fossil units produced 588,838.  The best thing that can be said is that at least load is low in the early morning when solar energy is non-existent.  However, that does not help the fact that a minimum of 1,424,942 MWH less whatever solar energy can come from hopefully not snow-covered solar panels will have to come from storage.

I believe that the State must do a comprehensive analysis of the joint frequency distribution of wind and solar energy resource availability to determine the worst-case reliability needs scenario.  It can be argued that even that analysis is inadequate because it would presume that wind and solar generating sources haven’t been damaged by an ice storm.  If New York fails to do this kind of analysis then an energy debacle comparable to Texas is the inevitable result.

The fact is that there are inherent advantages to fossil fuels that cannot be easily overcome with intermittent and diffuse wind and solar.  In the past the chances of extreme winter weather causing an electric energy shortage in New York were essentially nil.  Energy planners in State agencies, the Power Pool and at the utilities were committed to preventing it by developing an electric energy system with different kinds of dispatchable electric energy, developing on-site fuel storage with inventories able to cover extreme cases and enabling transport and delivery alternatives.  In the future, however, politicians have subverted energy policy for their agendas pushing reliance on just wind and solar. That is going to be an extreme challenge and calling that kind of system “diverse” is simply wrong.

To date all the analyses of wind and solar extremes have been limited to separate evaluation periods over shorter periods than I think are needed.  It is imperative to consider wind and solar availability over the same period and given that Texas extreme weather had a 10-year reoccurrence period I would say that the analysis should consider a minimum of ten years.  When the wind and solar resource availabilities are known then, and only then, can the wind, solar and energy storage requirements to prevent cold weather blackouts be established.

I encourage you to read Planning Engineer’s description of his impression of the problems that caused the Texas energy debacle.  New York’s de-regulated electric market is going to have to develop a market mechanism to support both the wind and solar generation facilities but also the energy storage needed to provide all the energy needed for a cold snap and the increased load when heating and transportation are electrified.

For example, say that the CLCPA planners determine that 200,000 MW of energy storage are needed to meet 90% of the energy requirements annually for their wind and solar development scenario, but 300,000 MW is needed for 95%, and 400,000 is needed for 99.9%.  Using those numbers means that 100,000 MW of energy storage will have to be supported in only 4.9% of the year so prices must be very high for a market solution.

Renewable energy advocates claim that “smart planning”, which I believe incorporates real-time pricing, will reduce the peaks but that is only theory.  The more likely reality is that because energy is really needed during these extreme weather events people will do whatever it takes to stay warm and end up paying exorbitant prices for that power.  It cannot end well for those least able to pay for their energy needs.

I conclude that a Texas energy debacle is currently unlikely today but inevitable if the CLCPA is implemented as currently mandated.

Editor’s Note: The CLCPA is a disaster promising to happen. Roger has been making that case for a long time now, illustrating the inherent weaknesses in the CLCPA approach to energy. The CLCPA is going to plunge New Yorkers into the cold and dark if leaders don’t stop playing stupid green political games and only the citizenry can make that happen. Now is the time!