[Editor’s Note: New York State is determined to emulate Europe in its fantasy battle with global warming and will reap a whirlwind of European-like energy crises as the reward.]

At the September 13, 2021 meeting of New York’s Climate Leadership and Community Protection Act (CLCPA) Climate Action Council a requirement to consider carbon reduction measures in other jurisdictions was discussed.  I agree that this is an important consideration but I expect that the evaluation will consider the control measures themselves in isolation and ignore the ramifications observed of those measures.

Since the spring of 2020 the Climate Action Council has been developing a scoping plan outlining recommendations to implement the CLCPA.  The goal is to complete a draft scoping plan by the end of 2021, take comments next year, revise the scoping plan, have the next state energy plan incorporate the scoping plan strategies, and then have state agencies develop the many regulations necessary.  A key component of the process will be the integration analysis.

At the September 13, 2021 Climate Action Council meeting , it was noted that the Integration plan provides support for the scoping plan but it is not the same as the scoping plan as a whole.  “It is designed to assess the greenhouse gas reductions, benefits and costs of portfolios of measures state-wide so the implications of various policy recommendations can be understood.”

The report will be prepared by Energy & Environmental Economics (E3) under the guidance of the New York State Energy Research & Development Authority (NYSERDA).  It “combines a detailed accounting model of energy supplies and demands across the entire economy with an optimized capacity expansion model in the electric sector” to develop a mix of energy sources that will meet the CLCPA goals.  The scoping plan will also estimate total societal costs and benefits.  For further background, I have summarized the schedule, implementation components, and provide links to the legislation itself at CLCPA Summary Implementation Requirements.

Carl Mas from NYSERDA led the discussion of the integration scenario planning process.  During his presentation he summarized feedback from the Climate Action Council.  At 1:43:40 in the video of the meeting he described the measures/policies first bullet, that notes that they will examine carbon reduction measures being pursued by “other states, regions, localities, and nations”.  He said that measures in other states and regions, “including Europe”, will be evaluated.  The purpose of this post is to point out that in addition to the measures themselves the observed outcomes should also be addressed.

Great Britain and other European jurisdictions have similar greenhouse gas reduction policies in place.  In June 2019 Great Britain became the “first major economy to bring all greenhouse gas emissions to net zero by 2050”.  Germany has its Energiewende (energy transition) which will expand renewable energy resources and phase the electric sector out of fossil fuels to “reduce the energy sector’s emissions by 61 or 62 percent by 2030 compared to 1990”.  Implementation of both policies is further along than the New York CLCPA and the ramifications are becoming evident.

In September 2021 electricity prices reached record levels in the European and United Kingdom power markets.  The day-ahead electricity prices are triple of those a year ago.  Paul Homewood at the Not a Lot of People Know That blog writes:

The immediate trigger has been low wind speeds across much of Europe in the last few weeks, meaning reduced outputs of wind power. This has led to a shortage of power on the grid, and a consequent spiking of prices. This sort of thing occasionally happens in winter when demand is high, but is unheard of in summer months, indicating that something is going badly wrong.

I believe that the current problem can be traced to an increasing lack of diversity of electrical generation sources in the European and United Kingdom electrical systems.  In order to provide reliable electricity, electric operators must balance load with generation dispatching generating sources to meet load variations. 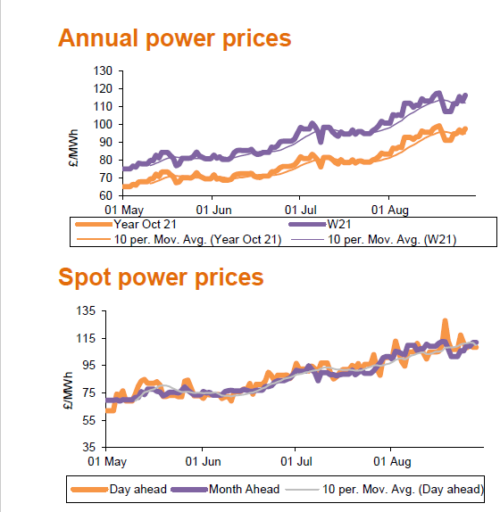 Dispatchability is a key attribute of the generators needed for reliable electricity.  Fossil-fired, nuclear, and hydro generating stations are the primary sources of dispatchable energy today.  Europe has been phasing out coal and nuclear generation so the percentage of dispatchable generation is decreasing.  In order to keep prices down the more types of dispatchable power that are available the better so that any upset in one source can be balanced by power from the other sources.  Nuclear and hydro generation has low fuel costs so those sources run as much as possible so the loss of coal capacity means that prices are strongly influenced by the availability and cost of natural gas.

In addition, solar and wind resources have zero fuel costs so they run whenever the sun shining and the wind is blowing.  This results in less income for the dispatchable resources and is a factor in the loss of coal generation capacity shown in following graph.  This price structure also affects existing natural gas generation and makes the construction of new natural gas capacity a poor investment so new plants are not being built. The result is a long-term loss of dispatchable generation availability. 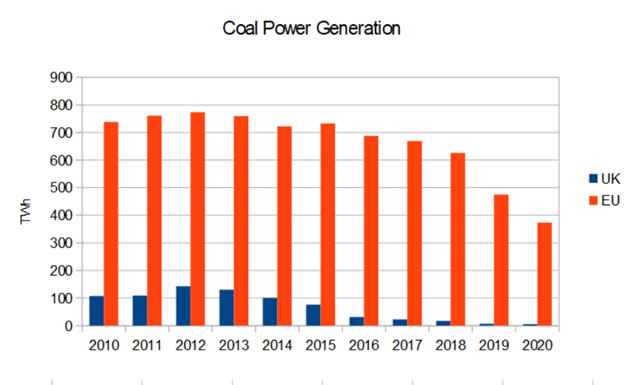 Europe has reached the point where renewable resource availability can trigger price issues.  Recently there was a two-week wind lull at the same time there was a Europe-wide gas shortage.  As a result of the system needing sources that can only survive by charging very high prices for the short periods when their energy is needed, the electricity price spiked and  German electricity prices hit a new record high.

The generation of electricity in Germany on this Saturday was downright chaotic. During the day, the solar systems generated a lot of electricity due to the almost optimal solar radiation. Between 1 p.m. and 2 p.m., the solar power reached a peak output of more than 30,000 megawatts. In the evening, the power generation of the solar systems collapsed drastically. Between 7 p.m. and 8 p.m., they delivered around 3,000 megawatts, just 10% of the output from the afternoon. However, the demand for electricity in the evening was almost unchanged at a good 50,000 megawatts. The network operators therefore had to call up all available reserves. But the output of the pumped storage power plants and the lignite power plants run up to their maximum load was not enough to compensate for the deficit between electricity demand and electricity generation. The still missing amount of electricity could not be compensated by importing electricity from abroad. Therefore, shortly before 8 p.m., loads were shed from larger, energy-intensive industrial plants, such as aluminum and copper smelters

Advocates for renewable energy often under-estimate the importance of reliable electricity to society.  Obviously, higher energy prices affect consumers but they also impact industrial activities and can force them to curtail operations.  As a result of the spike in prices, British fertilizer plants shut down, CO2 produced by the fertilizer plants became unavailable, and now there is the threat of food shortages because “The gas is critical to the production and transport of a range of products, from meat to bread, beer and fizzy drinks”.  The soaring energy prices have affected the viability of gas suppliers and taxpayers in Great Britain may have to bail them out.

The European crisis also underscores issues with imports.  The United Kingdom has become increasingly dependent on electricity imports from France and Ireland.  Issues with the undersea transmission line from France have reduced the amount that can be imported.  Ireland froze exports to the United Kingdom when they needed all the output from their wind farms for their own needs.  Worse, is the reliance of Europe on Russian exports of natural gas which could easily become a source of political blackmail.  The bottom line is that relying on imports introduces complications which can come back and cause problems.

The Climate Action Council reminded the analysts developing the CLCPA integration analysis that the law mandates review of actions being pursued by “other states, regions, localities, and nations.”  In the presentation Carl Mas summarized the planned response to feedback from the Climate Action Council.  His presentation said they would examine carbon reduction measures being pursued by other states and regions, “including Europe”.  I suspect that the response to this mandate will focus on the measures themselves and overlook the inconvenient fact that cost and reliability issues are occurring with greenhouse gas emission reduction targets similar to the CLCPA.

Based on the current trajectory of the CLCPA implementation process I believe the same things happening in Europe today will happen in New York.  The majority of the Climate Action Council members have insufficient technical background to fully appreciate the magnitude of the challenge converting the existing electrical system to one dependent upon intermittent renewable energy resources.

For example, while the claim that solar generating capacity may be cheaper than natural gas fired power plants may be true the problem is that the claim only covers part of the cost of providing reliable electricity to homes and businesses.  When the total costs necessary to provide electricity when and where needed is added the cost is much higher as reflected by the long-term trend in European electricity prices.

Over dependence upon intermittent resources reliant on the vagaries of weather also affect shorter term price as shown by the September price spikes.  It also appears that increased energy use during cold weather this winter could be a problem in Europe unless it is mild due to the surging gas and electricity prices.  The European experience also shows that there are significant ramifications to high energy costs that should be addressed by the CLCPA.

The European experience reflects not only high energy costs but there are troubling signs that reliability issues can occur even during periods when the electric system is not stressed due to high demand.  Germany had to shut down power to major industrial facilities without warning in August because of solar variability.  The fact that the September wind lull during a period generally considered low load demand caused grid operators to call on rarely used coal generators suggests that continued retirements of the dispatchable resources at the same time more wind facilities are added will eventually cause insurmountable problems because when a high-pressure system causes calm winds it does so over a very large area so all the wind facilities in an area as small as Great Britain will all lose power at the same time.  Someday the over-reliance on wind energy and loss of dispatchable resources will cause a grid crisis in Great Britain and New York will fare no differently if the state goes down the same path.

The CLCPA attempt to reduce greenhouse gas emissions ignores the observed risks and impacts of a transition to an electrical system reliant on renewable energy in a quixotic quest to reduce the impacts of the imaginary existential threat of climate change.  This cannot end well unless the state accepts the lessons from Europe and radically revises the schedule and targets of the CLCPA until a feasible plan to address the problems identified is developed.

Finally, given the importance of what is happening in Europe I recommend an article on the same topic at Manhattan Contrarian.