New York Residents: Save Yourselves, Get Out While You Can!

New York Residents: Save Yourselves,Get Out While You Can!

[Editor’s Note: City people who control New York don’t want you upstaters using oil, gas or propane and aim to make you dependent on electricity that can be out for days. Get out!]

You may want to consider moving out of New York State if you still live here. The state has collectively lost its mind. NY political leaders are so consumed with hatred of fossil fuels they are about to force its residents to pay an average of $28,000 to convert their homes away from heating and cooking with natural gas, propane, and fuel oil (see NYers Will Pay Average $28K to Retrofit Homes for All-Electric).

We’ve been raising the alarm, warning New Yorkers since 2019, when the state passed a draconian “energy” law, that residents will one day have to stop using fossil energy to heat and cook (see New York Pulls the Trigger, Commits Energy Suicide with New Law). That day has arrived. Yesterday a state commission approved plans to phase out fossil fuel-burning furnaces beginning as soon as 2025 as part of NY’s draconian (dystopian) program to address mythical “climate change.” 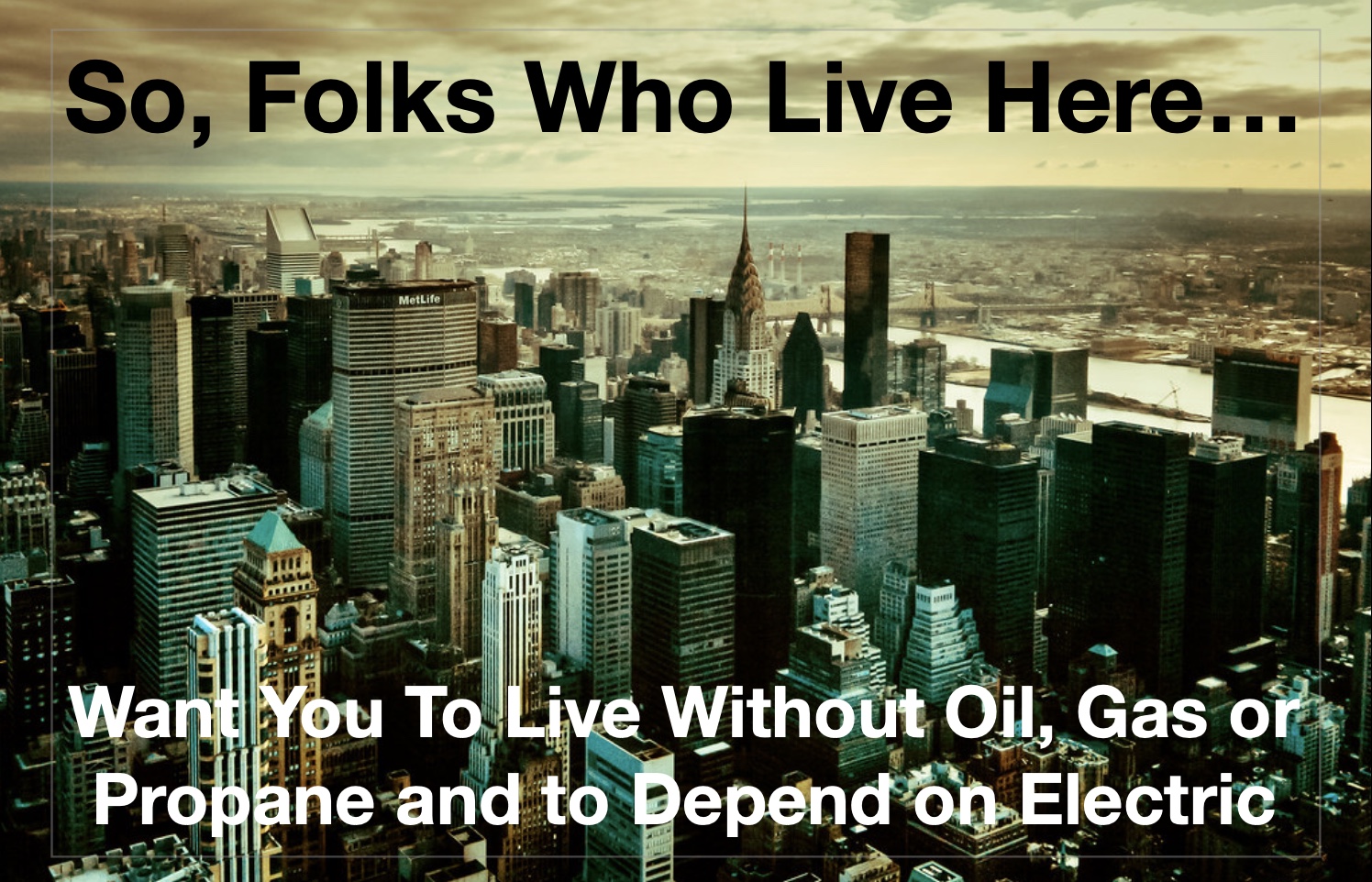 Starting in 2025, any new home built in the once-Empire State will be forced, under law, to not use fossil energy for heat. New homes will be forced to use all-electric. “Whew! My home is already built! I don’t have to worry,” you may think. Not so fast. Beginning in 2030, if your furnace needs to be replaced, it cannot burn fossil fuels. You’ll be forced to replace it with a heat pump or electric heating system. By 2050 (perhaps sooner), any remaining fossil energy furnaces in the state will be banned under NY law. Welcome to hell. Enjoy your stay.

The following article about these coming draconian changes appears in a Syracuse newspaper. Chip manufacturer Micron Technology recently announced it will build a multi-billion dollar chip manufacturing plant in the Syracuse area (as noted in the article below). Our advice to Micron: You better rethink your plan and move your plant to another state because you won’t have enough workers in the Syracuse area left to operate the plant.

The plan adopted today by the state Climate Action Council requires energy-efficient electric heat pumps or other non-combustion heating systems in every new home built in 2025 or thereafter.

For existing homes, residents whose fossil fuel-burning heating units give out after 2030 will have to replace them with a zero-emission system.

Those are just two of the many policies in a 445-page plan adopted today by the state Climate Action Council, a 22-member commission made up of state agency leaders, environmental experts, energy industry leaders and others.

Some of the policies approved today in the Climate Action Council’s “final scoping plan’’ require further action before they can be enforced. The new regulations on heating systems, for example, will require changes to the state building code. Other changes may require new legislation.

But the council’s “final scoping plan” is now the official policy for how state government will meet goals for greenhouse gas reduction required under a state law passed in 2019. State regulations must follow its prescriptions, said Robert Howarth, a Cornell University professor and a member of the Climate Action Council.

“Agencies are supposed to go ahead and start following the plan — making regulations, doing whatever it is that needs to be done — as of next month,’’ said Howarth, a professor of ecology and environmental biology.

Get ready to learn about electric heat pumps.

In Central New York, officials are planning for a massive housing boom to accommodate thousands of workers expected to build and staff new chip fabs for Micron Technology. The transition to new household heating technology could be especially significant.

Very few residences are heated now with high-efficiency heat pumps. But the Climate Action Council plan anticipates that 1 million to 2 million of the state’s 6.1 million buildings will use the technology by 2030 – just eight years from now.

In Onondaga County, more than 80% of households heat with natural gas, propane or fuel oil. Statewide, the number is about 85%, according to the New York State Energy Research and Development Authority.

“It’s a big change,’’ Howarth said. “And I think I think people should realize it’ll actually be good for new homeowners.’’

Heat pumps cost more to install than traditional furnaces but usually cost less to operate over the long run. Research shows they are healthier than sources that rely on combustion, which can contribute to asthma and other respiratory problems.

Nearly 18% of homes in Onondaga County currently are heated with electricity, but it’s traditional resistance heating. That older technology is much less efficient than heat pumps. Resistance heating remains a backup option to supplement air-source heat pumps in extremely cold weather, according to the state plan.

Under the Climate Leadership and Community Protection Act, signed into law in 2019, New York committed to reducing its greenhouse gas emissions 40 % by 2030 and 85% by 2050, compared with 1990 levels. The Climate Action Council was authorized by law to map out the details for doing that.

The council voted 19-3 today to approve the scoping plan.

Buildings account for nearly one-third of the state’s current carbon emissions. The climate action plan calls for a big transition in the way they are heated.

By 2025, state officials plan to require new single-family homes and multifamily homes of up to three stories to use high-efficiency, zero-emission heating systems such as heat pumps. The requirement will affect all units that apply for building permits beginning in 2025.

There are two main categories of heat pump. Ground-source (or geothermal) heat pumps, which represent about 20% of the market, use fluid circulating through underground lines to derive heat or cooling from the ground. The more popular air-source heat pumps extract heat from outside and pump it into the house, much like an air conditioner in reverse.

To promote the use of heat pumps, the state is implementing significant financial incentives.

The provisions of the climate plan dealing with buildings are just one part of a sweeping document, which also includes new policies for transportation, renewable electricity, industry, agriculture and forestry and waste.

Approval of the plan is just the beginning of transforming elements of daily life that affect climate change, members of the council said. Supporters argued that it’s important to take bold action now.

“In my view, today we are making history,’’ said Basil Seggos, commissioner of the Department of Environmental Conservation and co-chair of the council.

Among the no votes on the council was Donna DeCarolis, president of Western New York gas utility National Fuel Gas. DeCarolis said the plan puts too much reliance on a single form of energy – electricity – when the existing natural gas networks could provide balance.

“Consumers could end up paying more for less reliable energy,’’ she said.

The scoping plan approved today will likely continue to make news. The meeting of the Climate Action Council was still going on as this report was published.

A copy of the certifiably crazy (extremely dystopian) “Scoping Plan” by the NY Climate Action Council may be found here.