New York Struggles to Bring Climate Chaos Out of Order

[Editor’s Note: Roger reviews what can only be called chaos brought out of order as New York fashions politically correct but nonsensical climate policy out of what works.]

On July 18, 2019 New York Governor Andrew Cuomo signed the Climate Leadership and Community Protection Act (CLCPA), which establishes targets for decreasing greenhouse gas emissions, increasing renewable electricity production, and improving energy efficiency.  This post highlights some of the aspects of the enabling strategies needed to meet the targets that I believe the general public does not know is headed their way.

I have written extensively on implementation of the CLCPA closely because I believe the solutions proposed will adversely affect reliability and affordability, will have worse impacts on the environment than the purported effects of climate change, and cannot measurably affect global warming when implemented.   The opinions expressed in this post do not reflect the position of any of my previous employers or any other company I have been associated with, these comments are mine alone.

According to a New York State Department of Environmental Conservation (DEC) bulletin dated May 10, 2021, the Advisory Panels to the Climate Action Council have all submitted recommendations for consideration for the Scoping Plan that will be used to achieve the necessary greenhouse gas (GHG) emissions reductions economy-wide.  Advisory panels were created to develop recommendations for the Scoping Plan and made presentations at the April 12, 2021 Meeting and the May 10, 2021 Meeting and recordings of the presentations are available.  I provide links to all those recommendations and my posts describing them here.  The following summarizes what has been suggested.

In the past month or so the same politicians who managed to foist the CLCPA upon the citizens of New York advocated for the Climate and Community Investment Act (CCIA) which was intended to provide funding to support the CLCPA implementation efforts.  I wrote several posts on the legislation and talked to my local assemblyman’s office about my concerns.  In that conversation a WHAM report that the carbon tax alone would bring in $2.3 billion a year and could increase gasoline costs 55 cents a gallon was mentioned as the main reason the assemblyman was not supporting the legislation.

The costs for the enabling strategies are not known but it will be expensive so this is going to prove very unpopular based on the response to the CCIA.  The Transportation Advisory Panel proposed a strategy to transition to 100% zero-emission light duty vehicle sales which I believe mandate that all light-duty vehicles sold starting in 2035 have to be electric.

The panel claims that by 2028 electric vehicles (EVs) will be comparable in cost to an internal combustion engine.  Of course, all the infrastructure to support EVs in public ($1 billion to the utilities so far) will have to be covered, homeowners who purchase the vehicles will have to purchase at home charging support, and when every home has an EV the local electrical distribution systems will have to be upgraded as I discussed in my comments on the transportation panel strategies.

The energy efficiency and housing advisory panel sector emissions were the highest of any sector.  As a result, the primary mitigation strategy is to phase out fossil fuel use in buildings.  A primary enabling strategy is to change codes and standards as shown in the following slide.  The plan is to amend the state codes for new construction, including additions and alterations, to require a plethora of specific requirements including solar PV on “feasible” areas, grid-interactive electrical appliances, energy storage readiness, electric readiness for all appliance and electric vehicle readiness.  They propose to adopt these all-electric state codes for single family residences by 2025.

Note that a homeowner that chooses to an addition or alteration could be covered by the same requirements. In 2030, gas/oil replacements will be prohibited when heating and hot water systems have to be replaced in homes and in 2035 electric stoves and driers are mandated replacements.  I expect that there is a requirement that when a house is sold after 2030 that it will have to be all-electric.  If you prefer to use natural gas for home heating, hot water, and cooking you will not have that choice. 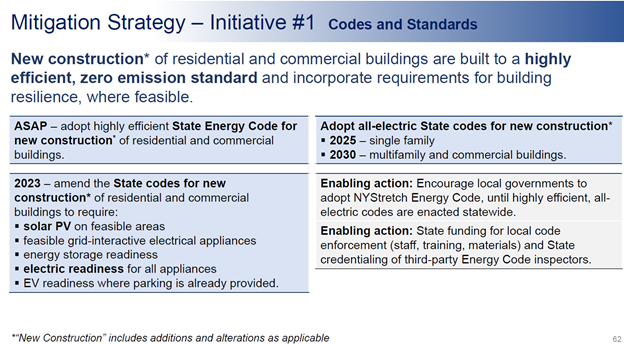 The presentation notes that “Resilience is of critical importance.” There is a major disconnect between the advisory panel and the public in this regard.  For the public, a slogan does not keep the house warm.  In the event of extreme weather such as an ice storm many people had experience surviving because of fossil fuel options.  I doubt the public will willingly give up the resilient capabilities of natural gas and fuel oil for heating.  I described these issues in more detail in this post.

The Land Use & Local Government Advisory Panel proposed a theme facilitating “responsible siting and adoption of clean energy sources” apparently oblivious to the fact that clean energy siting requires much more land than available at any of the priority development areas simply because wind and solar energy are diffuse and require large areas to collect it.  The Agriculture and Forestry Advisory Panel proposed enabling strategies to avoid forest conversion and avoid agricultural land conversion because of the role of forests and farmlands in sequestering carbon.

There is no recognition or plan to address the extraordinary buildout of wind generation projected by the Analysis Group – 35,200 MW compared to 5,905 MW in the last state impact statement that evaluated wind energy cumulative impacts.  Note that there are less than 2,000 MW of wind turbines today.  Responsible siting, minimizing conversion of sequestration land, and reducing cumulative impacts of thousands of turbines while developing the thousands of wind turbines is a significant challenge.

The waste advisory panel recommendations illustrate one overarching problem with these panels.  In light of the critical need for firm, zero-emissions resources and the fact that the methane emissions from municipal solid waste landfills, digesters at water resource recovery facilities, livestock farms, food production facilities and organic waste management operations are a major percentage of the total emissions, it only seems logical to address both problems by collecting and using that gas.  However, as I showed in my analysis of the waste strategies, there are passionate ideologues involved that don’t agree.

The meeting minutes note “concern regarding renewable natural gas, suggesting that there is a limited opportunity for it to contribute to Climate Act goals and believes that efforts in this area benefit the source without contributing additional environmental benefits.” Another member “expressed his concerns about how to move ahead with biogas if it is combusted as this would clearly increase net co-pollutants locally, and suggested the Council consider applications for biogas that would not be combusted (such as fuel cell technology at wastewater treatment plants).”

The Energy-Intensive and Trade-Exposed Industries Advisory Panel illustrates a less-than flattering aspect of the CLCPA.  The strategies for the small and declining industrial, mining, and manufacturing sector were described as “heterogeneous”.  This means that there are many different sources so economy of scale is not going to reduce costs.

Clearly, New York’s unilateral transition off fossil fuels will increase relative energy costs relative to other jurisdictions and industries will have to leave to survive.  They conclude that this sector needs currently unavailable solutions to produce emission reductions and remain viable within the state.  It seems pretty obvious that this advisory panel was included as a political ploy to placate the industrial sector.  Unfortunately, there is not much that can be done to reduce emissions significantly or prevent the remaining industries from fleeing the state out of necessity.

The Power Generation advisory panel is arguably the most important because in order to meet the targets all the other sectors will have to be electrified. The recommendations are available in a slide presentation.  I did a review of final recommendations, and, because this panel is most closely related to my background and interest, I posted earlier on the draft recommendations.

At the start of the process, I also posted on the membership of this panel.  The Albany politicians who nominated the members of the panel chose people whose ideological agendas are aligned with the CLCPA presumption that the transition away from fossil fuels is simply a matter of political will.  As a result, they included enabling strategies for the process of, for example, developing off-shore wind, but the related strategy did not include costs for actually developing offshore wind facilities or offer enabling strategies for it.

The ultimate problem replacing fossil fuels with renewable wind and solar energy is providing power during periods when both renewable resources are near zero.  In their presentation to the Power Generation Advisory Panel on September 16, 2020, E3 included the following slide that notes that illustrates the winter doldrum issue.  Incredibly, the panel recommendations did not specifically address this issue. 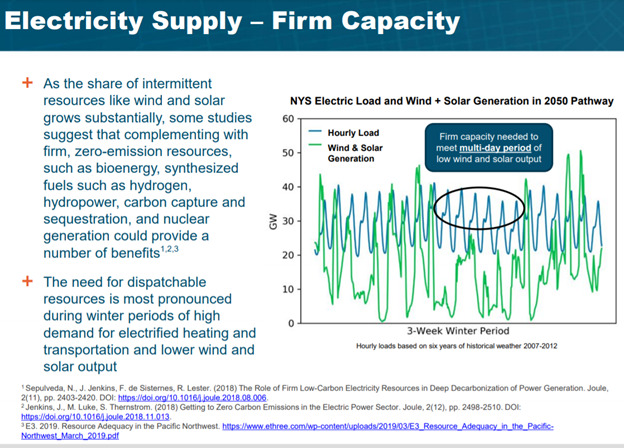 This post highlights some of the aspects of the enabling strategies needed to meet the CLCPA emission reduction targets that I believe the general public does not know are headed their way.  Given the constant harping from politicians and the media about the existential threat of climate change many might believe implementing this law is appropriate.  However, the question is just how much is the public willing to pay and how many limitations on personal choice will they accept?

All these recommendations will be incorporated into the integration analysis modeling effort by the State.  Technical staff at the agencies will develop the scoping plan that outlines what is needed to meet the law’s requirements and maintain reliability.  The scoping plan goes to the Climate Action Council for review and comment and the public even gets a chance to respond.  Once the scoping plan is accepted State agencies will implement codes and regulations.  The proponents of the CLCPA are convinced that they have broad public support for these changes in personal choice and the inevitable higher prices.

This year’s CCIA legislation was intended to cover CLCPA implementation costs and the thought that the carbon tax alone would bring in $2.3 billion a year and could increase gasoline costs 55 cents a gallon apparently was too much to bear.  Those costs are a fraction of the CLCPA costs.

The proposed enabling strategy for residential home heating mandates that all new homes built after 2025 be all-electric and that when fossil appliances have to be replaced after 2030 that they be replaced by electric alternatives that the public will have to cover.  All new light-duty vehicles sold in 2035 will be electric.  In order to transition the electric grid Kevin Kilty points out “It took money spent over a century to learn the systems engineering currently built into the grid. It will take a lot of money to duplicate all this for a completely re-imagined grid in a decade.”  New Yorkers need to wake up and ask for the costs of this legislation sooner rather than later.