[Editor’s Note: Gavin Newsom has been competing to be America’s worst governor ever since Andrew Cuomo fell from grace and he’s succeeding by raising California energy prices!]

Gasoline prices in California are over $2.50 more than the national average of $3.79 a gallon. The average price of a gallon of self-serve regular gasoline in Los Angeles County increased to a record $6.466 on Monday, October 3, above the previous high of $6.462 set on June 14. The average price has risen 31 consecutive days, increasing by $1.22. Governor Newsom is asking California refineries to switch to their winter blend gas, which is typically cheaper, earlier than normal.

The soaring prices are the result of insufficient supply to meet demand caused by reduced production of gasoline from refineries undergoing maintenance and from fewer operating refineries. California requires a special blend of gasoline that only its own refineries can produce. California refineries, similar to U.S. refineries, have been closing due to an onerous regulatory environment, rich inducements to switch to biofuels and to demand destruction due to COVID lockdowns. Governor Newsom wants to export California’s energy policies nationwide, and President Biden is in his camp, so Americans need to be aware of what is coming. 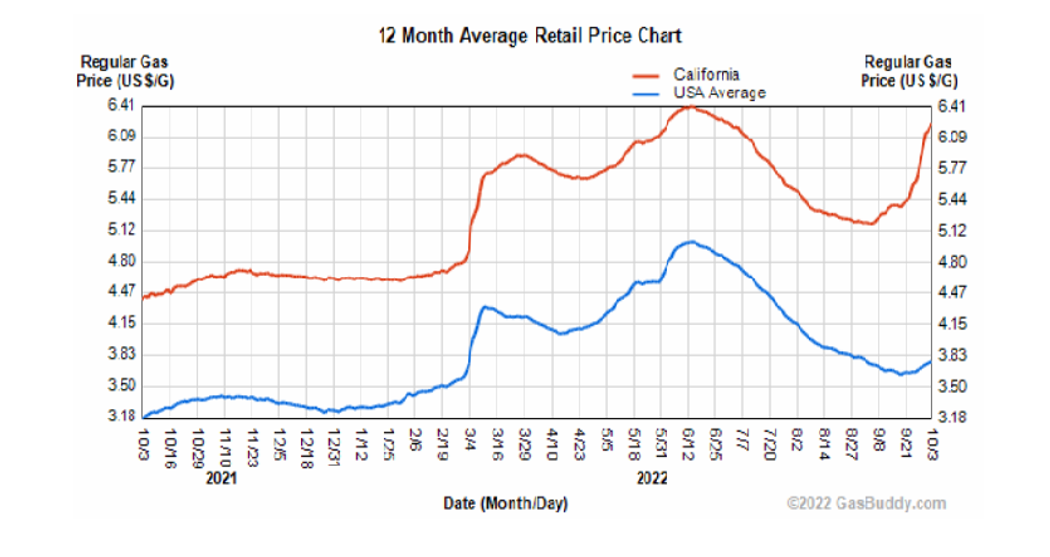 California gasoline prices are higher than the national average due to high fuel taxes and climate regulations, but the difference now is the largest in at least two decades. Taxes add about 68 cents a gallon—more than the 39 cent average of all the nation’s states, and California’s cap-and-trade program and low-carbon fuel standard add about another 46 cents a gallon. But the current price difference is more than triple the 75-cent price difference due to California’s tax and climate policy.

California’s climate regulations are causing many of its refineries to shut down or convert to producing biofuels that are more profitable because of large government subsidies and higher profits.  In California, refiners can receive as much as $3.70 per gallon in benefits by switching to producing biofuels. California lost 12 percent of its refining capacity between 2017 and 2021 and is set to lose another 8 percent by the end of 2023.

Californians may not even realize how much more they pay than drivers in other states. The average price of gas is $3.11 a gallon in Texas and $3.39 in Florida despite supply disruptions from Hurricane Ian. Further, it is unclear how soon California drivers will see the lower price of winter blend gasoline at the pump that Newsom has requested.

Newsom’s policies including onerous regulations and boutique fuel blends reap huge financial benefits for California refineries.  For example, the gross profit for a refiner on the Gulf Coast for gasoline is about $6.60 per barrel of oil. In Los Angeles, it is about $101. California’s climate policies benefit large refiners and producers that can sustain the state’s steep regulatory costs. Smaller businesses cannot.

Due to Californians paying over $2.50 more per gallon at the pump than the national average, Governor Newsom asked state lawmakers to introduce a windfall tax that would cap oil companies’ profits, tax at a higher rate any earnings above that ceiling and provide rebates to taxpayers — similar to those the state is depositing in residents’ accounts.

Also, the California Energy Commission sent a letter to five refinery executives, demanding they respond to a series of questions, including: “Why have gasoline prices risen so dramatically in the past 10 days despite a sharp downturn in global crude prices, no significant unplanned refinery outages in the state, and no increases in state taxes or fees?”

Refineries have been operating all out because of demands from the Biden Administration and the demand worldwide for petroleum products. About 3 million barrels per day, 17 percent of U.S. refining capacity, will be idled by maintenance or other events this month, which will keep upward pressure on gasoline, diesel and jet fuel supplies and prices.

While demand for gasoline has increased, the ability to meet it has been reduced — or rationalized — away during the pandemic when the demand and margins were down for domestic refineries. There are few options to improve refinery capacity since it takes years to permit and expand existing facilities and the trend in the industry has been to shut down or convert to renewable diesel which receives large subsidies and higher profits.

No completely new refineries have been built since 1977, and the EPA under President Biden has begun to question routine renewals of existing refinery permits. Rather than looking for ways to help refineries add capacity, the Biden Administration appears to be searching for excuses to close them, which has the effect of chilling interest in adding capacity or even remaining in business. The refinery issues are set against the backdrop of California’s diktat that internal combustion engine vehicles be banned from sale with reduced numbers beginning in just a few short years.

Gasoline prices in California are at record highs and more than $2.50 a gallon higher than the national average. California has higher state taxes on gasoline and has a climate policy that adds to the price but those items add just 75 cents a gallon to its price.

The problem is that California has a gasoline blend that only its own refineries can produce and many of those operating refineries need to close for scheduled maintenance and to convert to a cheaper winter fuel blend that Governor Newsom is willing to provide to gas stations earlier than normally allowed in order to give drivers a bit of relief on prices—an action that contradicts the state’s climate policy. Rather than realizing he needs more refineries, he is asking the legislature to tax oil company profits and provide rebates to taxpayers.

Many U.S. refineries have also closed and need some downtime for maintenance, meaning that U.S. drivers may start seeing escalating gasoline prices. Biden hopes this does not happen before the mid-term election as he has decimated the nation’s emergency reserve in order to keep gasoline prices somewhat in check.