National Fuel Gas Company (NFG), headquartered in Buffalo, NY, is the only fully integrated energy company operating in the Marcellus/Utica, by which we mean NFG is a driller (Seneca Resources), a midstream/pipeline company (Empire Pipeline), and a downstream end-user via its local distribution company (LDC), otherwise known as the local gas utility company (National Fuel). Little known fact: NFG’s Seneca Resources subsidiary owns an oil drilling operation in California. But not for much longer… 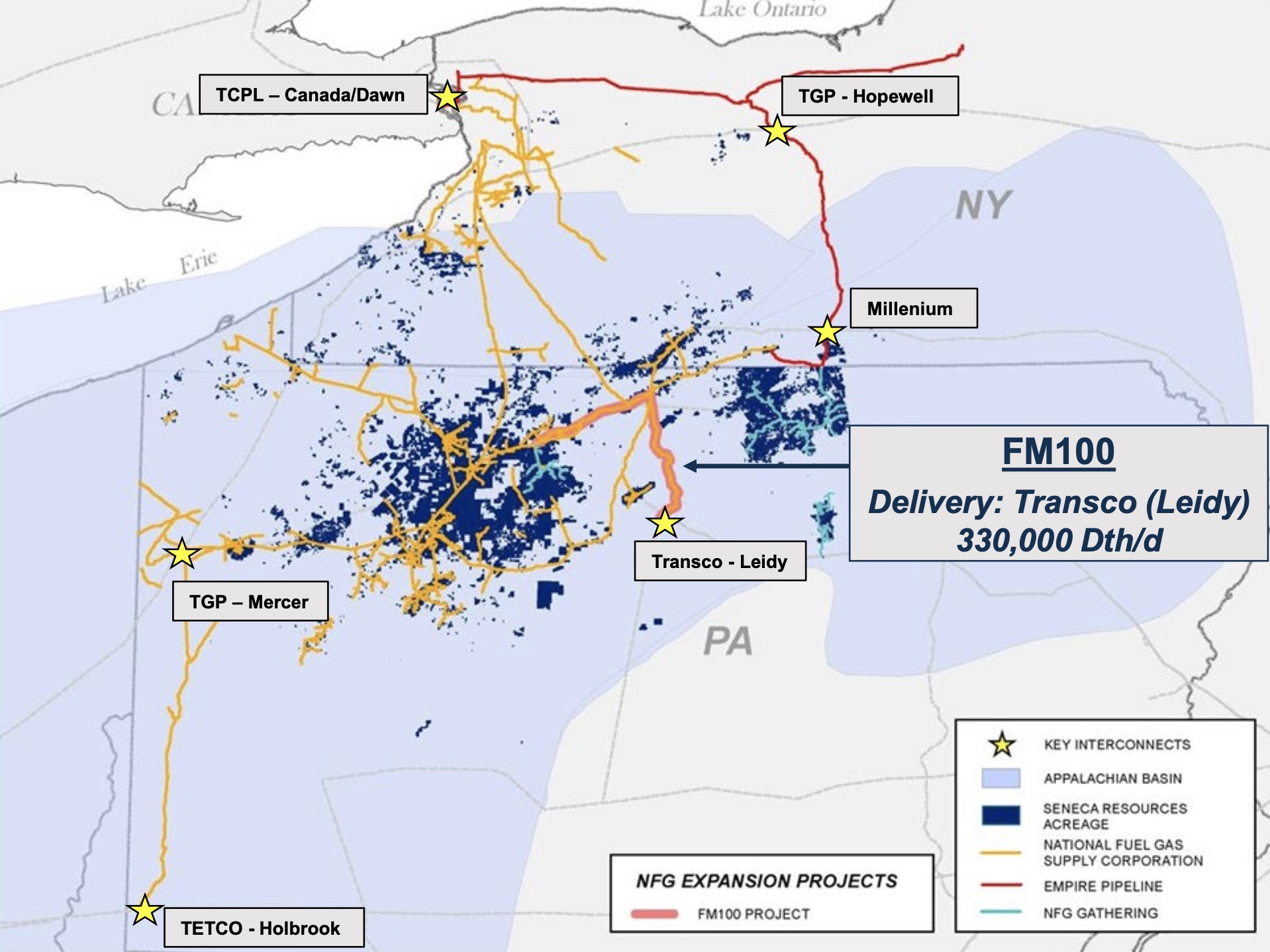 According to NFG’s most recent quarterly update (NFG’s second quarter, which is everyone else’s first quarter), on May 1 Seneca entered into a purchase and sale agreement to sell its California oil and gas assets to Sentinel Peak Resources California LLC for total consideration between $280 million and $310 million, depending on oil prices. NFG will, according to CEO David P. Bauer, use the proceeds to invest in the company’s Marcellus/Utica drilling program. Goodbye Cali, hello Pennsylvania!

The sale price consists of $280 million in cash at closing, plus up to three annual contingent payments between calendar 2023 and 2025 that can total another $30 million in total. The value of these contingent payments is $1 million for each dollar that Brent crude oil prices average over $95 per barrel in each respective year, with a maximum of $10 million in any given year.

The sale news came as part of NFG’s 2Q22 update. As part of his opening remarks, Bauer said California’s onerous regulations had a lot to do with exiting that state. It’s a common theme. Cali is toast–everyone is leaving due to regulations and obscene prices (brought on by the Democrats who run the place like a dictatorship).

Good morning, everyone. National Fuel had a great second quarter. Adjusted operating results were $1.68 per share, up 25% year-over-year with each of our four major reporting segments contributing to the increase.

Seneca had an outstanding quarter, both operationally and financially. Production for the quarter was up sequentially and relative to last year. Net increase, combined with the ongoing rise in commodity prices caused earnings to grow by 50% over last year. As we announced in last night’s release, Seneca has entered into an agreement to sell our California operations to Sentinel Peak for $280 million in cash and $30 million in contingent consideration.

Just as the spring of 2020 was a great time for us to acquire natural gas assets, we think the current oil price environment is the right time for us to sell our California properties. These have been great assets for us. Since 2010, generating over $1 billion in cash flow that funded a good amount of our upstream and midstream growth in Appalachia.

But the regulatory environment in California makes it difficult to grow those operations. Plus as our Appalachian businesses have grown our California assets were increasingly non-core. Sentinel Peak will be a great owner of these assets. They’re an established operator in California with an excellent track record.

Justin will have more details on the transaction, but before moving on, I want to personally thank the California team for their hard work and dedication to the company.

We expect the June 30 closing date for the transaction. Net proceeds from the sale should be approximately $175 million to $200 million after accounting for taxes, the April 1 effective date and the unwinding of out-of-the-money hedges that will not be transferring to the new owner.

Turning to Seneca’s capital budget. We’re revising capital spending guidance to a range of $475 million to $550 million, an increase of $50 million at the midpoint. The majority of the increase is related to an acceleration of completions activity later in the fiscal year. This was an easy decision given the strength in commodity prices, particularly through this upcoming winter. It allows us to capture a better than $3 price differentiation between winter and summer pricing and pays in under a year. The remainder of the increase in capital relates to ongoing cost inflation.

Like most of our peers, we’re seeing inflation across the board on materials and services. Justin will have more on this in a few minutes.

Moving to our pipeline business. This was the first full quarter of operations on the FM100 project, which was the principal driver of the 14% increase in revenues on our interstate pipeline system. Everything about the project is performing as expected. You may recall there are two revenue streams associated with the project. $35 million in incremental expansion revenues and a $15 million increase in supplies base rates to reflect the modernization component of the project. That $15 million base rate increase went into effect as planned this past April 1.

Not only does FM100 provide a great tailwind for the FERC regulated businesses, but it also bolsters Seneca’s firm transportation portfolio, facilitating access to new end markets to further diversify its future sales.

Utility had another good winter heating season, providing the safe and reliable service that our customers expect. Importantly, despite the weather being consistent with last year, and despite the reduction in our PA rates due to the OPEB change that we discussed in the earnings release, the utility experienced growth in customer margin, thanks to our system modernization tracker in New York. Further, we continue to see modest growth in customer counts, which also added to margin.

As the weather improves, our summer construction program kicks into high gear, we have lined up all the contactor crews and source the necessary materials for the projects we have planned. No surprise, we are seeing cost inflation but nothing that’s overly concerning at least at this point, and aggregate costs are roughly 10% higher than last year.

We have another year left on our New York System Modernization Tracker, and it’s been 15 years since we’ve last filed a rate case in Pennsylvania. And we’re starting to look at the timing of a rate case there in Pennsylvania. So with that in mind, we’re doing our best to accelerate our pipeline replacement program at the Utility. And as such, now expect capital spending for the year will be in the range of $100 million to $110 million.

As you know, last December, the New York Climate Action Council published its draft scoping plan, which describes how the state plans to achieve its emission reduction goals. Recently, in-person hearings on the scoping plan were held across the state, including in our service territory.

What was evident to me from those meetings is that while most everyone in the community, including us, is in favor of reducing carbon emissions in New York, there’s a little consensus on how and at what pace we ought to do so. People are concerned with costs and they’re right to be.

The scoping plan estimates that will cost on average $20,000 to electrify a home in New York State, but that cost could double in the Buffalo area where houses are older and winners are more severe than in the downstate region. Further, it’s estimated that electrifying the heating load in Western New York would require a quadrupling of the energy grid, which would almost certainly add significant ongoing costs to customer bills.

Energy reliability is also on people’s minds. The scoping plan relies almost entirely on wind and solar. And everyone knows it’s not sunny and windy all the time. We continue to advocate on behalf of our customers for a more reasonable approach to the energy transition, one that pursues aggressive energy efficiency measures and hybrid heating solutions, while continuing to leverage existing infrastructure to deliver low and no carbon fuels. Such a plan can meet or exceed the state’s emission reduction goals, all while saving consumers’ money and without sacrificing energy reliability.

Looking to the rest of the year. On a consolidated basis, we now expect free cash flow from operations will be approximately $290 million, assuming the midpoint of our updated guidance ranges, adding in the expected net proceeds from the California sale and total excess cash should be in the $475 million area.

Looking out beyond this year, with higher realized natural gas prices, along with mid- to high single-digit production growth at Seneca. I expect free cash flow from operations will continue to increase. This outlook provides us with great flexibility. As I stated in last quarter’s call, our first priority is to reduce leverage on the balance sheet with the hope of gaining an upgrade from the rating agencies. While our credit metrics will likely improve with the recent rise in pricing, we need to be able to sustain those metrics through the cycles. And to do so will require a reduction in our absolute debt levels. Lowering our absolute debt also improves our equity to capitalization ratio which is helpful as we head into rate cases across the system.

We also plan to invest in the continued modernization of our utility and interstate pipeline businesses. Doing so is a big win for everyone. System reliability improves, carbon emissions decline and rate base grows.

And I think there’ll be further opportunities to expand our pipeline business. While projects of the size of FM100 aren’t likely in the immediate future, I do see continued demand for more modestly sized projects. But that isn’t to say there isn’t a need for significant new pipeline infrastructure in Appalachia.

The United States is blessed with an abundance of low-cost natural gas in the Marcellus and Utica shales, and the demand for that resource is high, both domestically and abroad, particularly given the situation in Europe. But the pipeline infrastructure in the region is nearly full. And with the continuing backdrop of unfriendly state and regulatory policy, development of large-scale pipeline infrastructure is largely stalled. Without new pipelines, producers, including our own Seneca resources, cannot continue to grow production in any meaningful way.

As a result, we get the worst of all worlds, high prices and reduced energy security. And despite policymakers’ best intentions, I think there’s a good chance that carbon emissions will actually increase in the near term. As an example, this past winter, there were several periods of time when more than 20% of New England’s electricity was generated using fuel oil in spite of the fact that the Marcellus Shale is only a few hundred miles away.

Undoubtedly, the industry is ready and willing to do its part to help fix the situation. There is more than enough natural gas reserves in the country to both temper domestic prices and help wean Europe from its dependence on Russia. All we need is more infrastructure. National Fuel with our unique suite of integrated assets in the core of the Marcellus and Utica shales is well positioned to play a long-term role in the development of both the natural gas resource and building the infrastructure needed to get it to market.

In closing, National Fuel had a great quarter. Our integrated model continues to deliver considerable benefits that are evident in our financial and operating results. Looking forward, we’re entering a period of substantial free cash flow, which will give us significant financial flexibility. And our focus on ongoing emissions reductions will improve the sustainability of our operations and position us well for the future.*

As Bauer points out in his comments above, unless and until more pipelines get built, our region is pretty much maxed out and can’t produce any more natural gas. Seneca Resources “cannot continue to grow production in any meaningful way.”

After Bauer spoke, Justin Loweth, president of Seneca Resources, delivered his prepared comments. In his comments, Loweth talks about two new pads with multiple wells drilled in Tioga County, PA during 1Q. One pad contains Utica wells, the other Marcellus wells. Together the two pads are flowing a staggering 150 MMcf/d of natural gas. He also mentions the company recently leased a large tract of land in Lycoming County, which adds another 10 “highly economic” Marcellus drilling locations that once developed, will flow through Seneca’s Trout Run gathering system.

Read more here. Also, here is a copy of the full update, with financials. A copy of the slide deck used during the conference call may be found here.