As the world considers the many challenges posed by the energy transition, a recent National Renewable Energy Laboratory study once again showcases the important role that natural gas will play for affordability and reliability.

In its recent study, NREL deemed natural gas the most reliable and cost-effective method to fill the gaps left behind by intermittent wind and solar. NREL’s “least-cost electricity mix” scenario projects 60-80 percent of generation from wind and solar, with natural gas (combined with carbon capture and storage) supplying the remaining energy to provide net-zero emissions energy by 2035.

According to the study, natural gas power generation is the most cost effective and reliable option to support the “all options” scenario where wind and solar provide the bulk of energy production. The NREL study pays particularly close attention to the challenges associated with wind and solar energy, emphasizing that fossil fuels such as natural gas will be needed to bridge the gaps left by them.

Namely, the report cites the challenge of net load peaks – “the electricity load at a given point in time minus the contribution of variable generation resources to meeting load at that time.” These peaks occur during periods of high demand and low renewable output. Usually, hot summer days and cold winter nights.

It’s currently possible to see the impact of restricting natural gas power generation on energy reliability and carbon emissions in areas that experience hot summer days and cold winter nights. After years of restricting natural gas infrastructure, Northeastern states last winter had to burn fuel oil to keep homes warm during an extended freeze, which produced 3.55 billion pounds of CO2 –contributing to a 44 percent increase in the grid’s total carbon dioxide emissions from 2021.

However, as seen in the chart below, natural gas would provide a significant amount of energy during these net peak loads where wind, solar, and storage provide less than 50 percent total capacity. 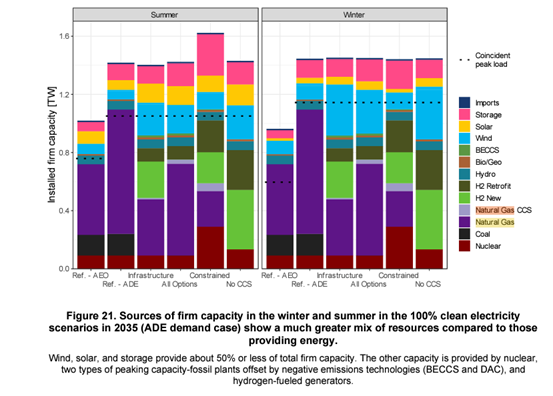 The NREL study’s all option scenario projects that 80-95 percent of energy can be met through renewables, but acknowledges that the “remainder is really hard to meet with wind, solar and storage.”

A study from the Grattan Institute had a similar conclusion with one of its authors saying:

“Gas generation with offsets looks to be the lowest-cost ‘backstop’ solution until zero-emissions alternatives– such as hydrogen-fired generation or near-perfect carbon capture and storage– are economically competitive. Gas is likely to play a critical, but not expanded, role.”

According to NREL’s scenario, natural gas would still account for 660 GW (20 percent) of generating capacity by 2035. Natural gas’s large share of 2035 capacity is owed to its lower capital cost than other forms of energy, enabling it to meet peak demand at a lower cost to consumers than other resources.

Natural gas already represents a large fraction of peaking plants in today’s power system, but provides a small fraction of total energy, often operating with low-capacity factors. NREL estimates that the 20 percent of natural gas generating capacity will account for 4 percent of actual generation. This low utilization is explained as favoring natural gas in fulfilling the gap left by renewables:

“Low utilization is the main reason meeting peak demand inherently has higher than average costs: the capital and other fixed costs of this capacity must be recovered with less generation compared to plants that run more frequently. This low utilization favors plants such as natural gas combustion turbines, which have lower capital cost, and for which variable cost is of less importance.”

Bottom Line: Natural gas is critical to grid reliability, and will play a significant role in ensuring this reliability as more renewable generation comes online. As the NREL study demonstrates, in the journey to net-zero emissions, natural gas will be the affordable, on-demand generation that will enable a grid, heavily reliant on renewables, remains dependable on hot summer days and cold winter nights.

The post NREL Deems Natural Gas the Most Viable Option To Fill The Gaps Left By Renewables appeared first on .