Students attending the NTIEC Energy & Oilfield Career Experience learned about the many job opportunities the natural gas industry has to offer. 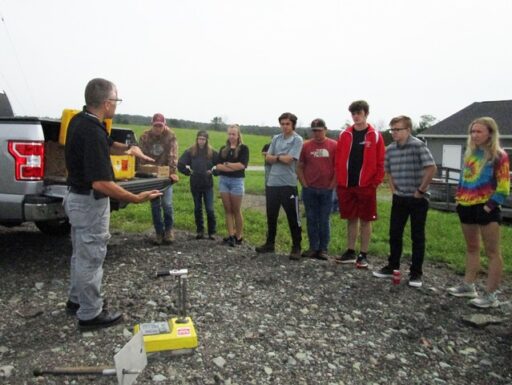 Cabot Oil & Gas Corporation and Williams Companies were key sponsors, offering presentations, tours, and hands-on activities along with many of their industry partners. Students visited well pads, a water impoundment site, participated in the ribbon cutting at the new Lackawanna College School of Petroleum & Natural Gas, and tested their driving skills in a simulator at the Susquehanna County Career & Technology Center’s CDL Training Center.

According to NTIEC educational coordinator Deb Tierney, the students began the week with a general curiosity in the natural gas industry and were able to narrow down their interests with each passing day.  “They did not know there were so many job opportunities in the gas industry,” Tierney remarked. “They liked the idea that the jobs are here to stay long beyond their lifetimes.”

Sayre High School graduate Carrie Claypool has already enrolled at Mansfield University to pursue a degree in geology, so she took a particular interest in a presentation by representatives from Selman and Associates, which provides Geological consulting and mudlogging services for the industry. As her fellow students broke for lunch, Claypool stayed behind and took a closer look at samples of shale retrieved from various depths.

“I learned a lot about the consistency of rock and how they are used to determine where the natural gas is,” she stated. When asked if she was considering leaving the area once she graduates from Mansfield, Claypool said, “I’m not sure now. I didn’t know that the Marcellus shale was here until I came here. So now I’m thinking that I might be able to get a job closer to home.” 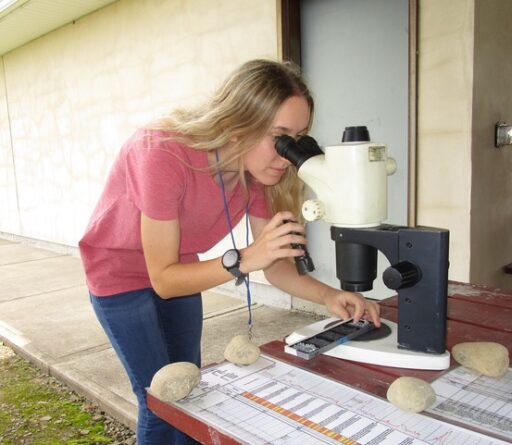 Alex Duffy from Abington Heights High School had already been working with Tierney on virtual job shadowing with a number of engineers in the area, and she recommended that he participate in the Oilfield Experience program. Prior to attending, Duffy had narrowed his search to mechanical or aerospace engineering. A presentation by a team of Williams engineers opened his eyes to the vast variety of specific classifications of engineers needed by their company every day.

“It has been interesting to see all of the different career paths that will be available to me,” Duffy related. While he said that the program solidified he resolve to get an engineering degree, he had to think a bit more about his options. “I could see myself getting that degree and having many opportunities in the oil and gas industry.”

Cabot is considered an “upstream” company because they bring the gas out of the ground. Williams is a “midstream” company that processes and transports the gas to market – the “downstream” users. Two participating students have parents who work at Williams. While they had some idea of what their respective parents do for a living, they gained practical knowledge and a better perspective of the industry as a whole.

“I never knew anything about the drilling,” admitted Boaz Sporcic, who moved to the area from the state of Washington five years ago. “We only knew the midstream.” 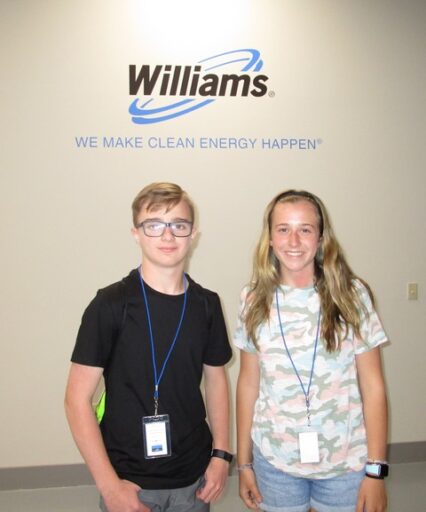 Boaz Sporcic (left) and Cortney Guastella, who both have parents who work for Williams Companies, learned about how natural gas gets to Williams’ facilities and where it goes and how it is used at the downstream end of their pipelines.

Cortney Guastella’s parents brought her to the area from New Jersey. She took a fascination to the increasing use of drones in many facets of oil and gas operations.

Tunkhannock juniors Charles Welles and R.J. Sawicki enjoyed the tour of the School of Petroleum & Natural Gas prior to the ribbon cutting ceremony. Both said that they would definitely consider enrolling after they graduate from their high school, which they could literally see from the front of the new campus.

“I thought they have a lot to offer for a good education to get into the industry,” Welles remarked.

Sawicki was impressed by the mechanics lab, noting, “They have a lot in there that’s hands-on.” 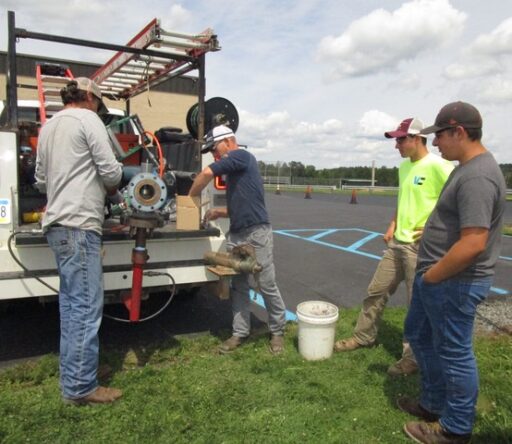 Tunkhannock students Charles Welles (right) and R.J. Sawicki move in for a better look at a pressure release valve test conducted by Andy Larkin (left) and Kevin Gorman of Proconex.

“They loved all the hands-on activities,” Tierney said of the students’ engagement over the course of the week.

Being able to test the electrical conductivity of various types of soil, which the students did with Garrett Schmidt of Moody and Associates, is just one example of how using the actual tools of the trade gave them a better sense of whether or not this would be a line of work they would enjoy. The same was true, Tierney noted, of students who took part in the Healthcare and Agriculture career programs earlier in the summer.

NTIEC is a nonprofit agency working with 18 school districts to produce a highly-skilled workforce in Northeast Pennsylvania through the integration of age-specific programming, internships, and externships. Tierney encourages more industries to support NTIEC’s efforts by contributing time and resources that not only spark an interest in family-sustaining jobs in the area among youths but actually create paths to those lucrative careers.