NYISO Operating in Fear of the Cuorruptocrat Crocodile

[Editor’s Note: NYISO, the system responsible for energy security in New York is afraid to do what’s right about natural gas for fear the croc will snap.]

I have written extensively on implementation of the CLCPA closely because its implementation affects my future as a New Yorker.  I briefly summarized the schedule and implementation CLCPA Summary Implementation Requirements.  I have described the law in general, described the enabling strategies, evaluated its feasibility, estimated costs, described supporting regulations,  summarized some of the meetings and complained that its advocates constantly confuse weather and climate in other articles.  The opinions expressed in this post do not reflect the position of any of my previous employers or any other company I have been associated with, these comments are mine alone. 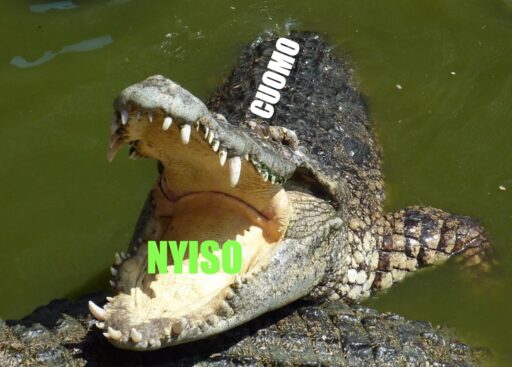 NYISO lives in fear the Cuorruptocrat Crocodile will snap if it fails to act politically correctly on natural gas and other energy issues. It’s cooperate with the Cuomo climate clowns or else!

In the 1990s New York’s electric system was de-regulated and the Federal Energy Regulatory Commission (FERC) recommended the formation of independent entities to manage energy transmission. “At the same time, the New York State Public Service Commission (PSC) established retail electric competition to allow customers to choose their electric supplier. The PSC supported the formation of competitive wholesale markets as the basis of retail choice, and approved restructuring plans by which utilities divested most of their power plants to competitive generation companies.”  In 1999, the NYISO was established to replace the NYPP.

The NYISO manages the electric system.  They have to balance the instantaneous supply of electricity between the generators and customers across the state.  In the de-regulated market electricity is supplied by multiple types of agreements between the suppliers and the NYISO.

Some of the power is contracted by purchase power agreement contracts, some by day-ahead auctions, and the rest by real-time auctions that cover any additional power needed.  They manage the supply of power and maintain the frequency across the state and with their connections to other operating systems.  In addition, the NYISO has to plan for future changes to the system.  At this time the biggest factor for change is the CLCPA.

There are a few other relevant aspects in the NYISO description:

The NYISO is a not-for-profit, independent company unaffiliated with any state or federal agency or energy company. The NYISO is led by an independent Board of Directors. The NYISO’s federally-approved tariffs contain strict requirements for our Board of Directors and all employees to have no financial relationship with any of the companies that participate in our wholesale energy markets. The NYISO is dedicated to transparency in how we operate, the information we provide, and our role as an impartial system operator, planner, and broker of New York’s wholesale electricity markets.

The NYISO is accountable to both federal and state regulatory bodies and maintains compliance with nearly 1,000 reliability requirements. The NYISO’s independent Board of Directors collaborates with our stakeholders via a robust shared-governance process that facilitates input from interested stakeholders. The establishment of the NYISO created a system of shared governance that provides all market participants — from utility companies to electric generators — a voice in the operation and evolution of the marketplace.

Under the NYISO’s transparent, inclusive process, representatives from market participants have voting power to exercise responsibilities such as preparing the NYISO’s annual budget, reviewing and recommending candidates for Board vacancies, developing and adopting technical guidelines for operation of the bulk power system, and market design and system planning. NYISO stakeholders share responsibility with the NYISO Board to approve proposed changes to the NYISO’s governing documents, including its federally approved tariffs.

The NYISO’s description of their process and the very name suggest that they are independent of New York politics but that is not the case with the current administration.  In the following I will explain why I think that the NYISO is pulling its punches vis-à-vis the feasibility of the CLCPA.

NYISO and the Cuomo Administration

I am not an admirer of Governor Cuomo because my impression is that his administration has always been about his best interests.  Whenever any organization has disagreed with Cuomo’s energy agenda the response has been bluster and threats.  For example, when National Grid’s plan for natural gas supply in New York City contradicted Cuomo’s agenda, he threatened to revoke the operating license for National Grid if they did not comply with his plans.

Another example, is NRG Energy’s Dunkirk power plant which was deemed uneconomic and scheduled for closure.  For some political reason, Cuomo announced an agreement to repower the plant with natural gas.  In a de-regulated market making a grant to one facility to continue operations is sure to upset competitors and a lawsuit was filed.  In addition, certain rules have to be followed that include fee requirements and NRG decided to not pursue re-powering.  Cuomo’s response was to seek a PSC probe of the business decision.

This overt insistence on toeing the administration’s political agenda extends to all the agencies under his thumb.   The Department of Public Service (DPS) and Public Service Commission are supposed to be independent however this is not the case.  In the summer of 2019 a group of retired Department of Public Service employees submitted a letter that stated “Until the current administration, Governors have generally respected the plain language of the Public Service Law (PSL), which … safeguards the mission of the DPS to serve not political interests but the public interest.” The letter signed by fifteen retired department workers states: “Governor Andrew Cuomo, however, has not done so.”

Unfortunately, the NYISO is not immune to the Governor’s tactics. In a filing to the Public Service Commission, the NYISO noted that in order to meet Cuomo’s Clean Energy Standard, a predecessor regulation to the CLCPA, New York would have to install over 1,000 new miles of bulk transmission lines at great cost and effort which exposed one of the short-comings of the Governor’s clean energy agenda.

In this political climate it is not surprising that rather than standing up to the bully, the “independent” NYISO caved, Jones left, and was replaced by Rich Dewey.  Now the NYISO reports carefully word every document so as to not invoke the wrath of Cuomo’s bullies.

There is another aspect of the NYISO’s operations that colors their responses.  It is not surprising that the NYISO completely endorses the idea that wholesale electricity markets have the ability to solve any problems because that is the reason for their existence.  Unfortunately, I think some of their faith in market mechanisms is unwarranted.

I am not an expert on market design but I fear we are heading towards an energy crisis.  In a regulated market the Public Service Commission (PSC) tells the vertically integrated electric utilities to meet a specific mandate, the utilities develop a response, the PSC oversees their responses relative to reliability and affordability, and the necessary infrastructure gets built.  In New York’s de-regulated market, planners at the NYISO and various state agencies do the planning and then the NYISO and PSC develop “innovative market rules necessary to meet the objectives of the CLCPA” that they hope will engender market participants to build the necessary infrastructure.

There are tremendous technological challenges converting from the current electric system to one dependent upon renewable energy sources and I am convinced that the only way unexpected kinks will be worked out is by trial and error.  The Texas electricity market design did not work well in February and I have no reason to expect that some new wrinkle introduced by relying on intermittent and diffuse renewable energy will only be resolved after the problem occurs. Robert Bradley recently explanation of what happened during the big freeze relative to the Texas electricity market and the difference between managed markets like New York’s wholesale electricity market and a “free market” supports my concern.

In addition, the problem may occur because the NYISO identifies a problem that the politicians who are running New York energy policy decide to ignore.  Of course, when it occurs the blame will be place on the NYISO.  In this regard Donn Dears book “The Looming Energy Crisis” provides a detailed description of potential problems that are a challenge to overcome and might require imposition of politically unpopular policies.  In the current political environment these issues are more likely than not.

Finally, I want to give an example where the market did not produce the obvious environmental solution.  New York State energy and environmental policy is more about optics than facts.  Nowhere is this more apparent than the recent spate of opinion pieces, reports, and even policy proposals related to peaking power plants.  In brief there are old simple cycle turbines in New York City that were built to provide reliable power during peak load periods.  However, there are old, inefficient and much dirtier than today’s technology.  In my opinion the continued operation of the old simple cycle turbines in New York City is the result of New York’s de-regulated market place.

I am absolutely sure that in a regulated environment the responsible utility would have made a case to the Department of Public Service that replacement with cleaner, more efficient generation was needed, the Department would have agreed,  and, after it was approved, the utility would have been guaranteed a reasonable return on their investment so the turbines would have been replaced.  However, in the de-regulated market there wasn’t a strong enough financial incentive to replace the old units.

Before I retired in 2010, I worked on two separate permit applications for new, efficient, and cleaner replacement power for one set of the old combustion turbines.  In both instances the permits were approved but the replacements were never built, apparently because the company decided that the business case was not strong enough to warrant the investment.  The fact is that sometimes the market signals are too weak to provide the desired result.

The point of this post is to document the importance of the NYISO but to also point out that their policies and recommendations are necessarily colored by their belief that markets are a viable solution to the challenges of the CLCPA energy transition and by the political climate of New York.  The NYISO has done a good job analyzing the challenges of the energy transition.

Unfortunately, many members of the CLCPA advisory panels and the Climate Action Council don’t understand, don’t want to understand, or choose to ignore the warnings in those analyses.  In my opinion, there are enough technical challenges in the transition that maintaining reliability will be a problem but the added challenge of designing some market mechanism to get the market to provide the resources necessary all but assures that reliability will become an issue.

Finally, I sympathize with the NYISO position.  All their work not only has to fully explain the problems they identify but the wording has to pass a political optics text.  This means that all their reports have to toe the existential threat of climate change narrative without any suggestion that the potential risks to reliability, affordability, and environmental impacts of the proposed solutions far out-weigh the alleged impacts of climate change.  It is similar to the symbiotic relationship between the Egyptian plover and crocodile.  NYISO is performing a service to the state but you never know if the Cuomo crocodile is going to snap.