[Editor’s Note: Methane leak reduction is a priority for Cabot Oil & Gas and the company uses an OGI camera to detect and eliminate those leaks.]

Have you ever wondered how gas leaks are detected while in the field? We rely on the use of an innovative thermal imaging technology called optical gas imaging (OGI) to view gases invisible to the naked eye such as such as methane (CH4), sulfur hexafluoride (SF6), carbon dioxide (CO2), and refrigerants. As OGI cameras are used in our routine processes, we are able to detect leaks safely and quickly, allowing for timely repairs to prevent damage. 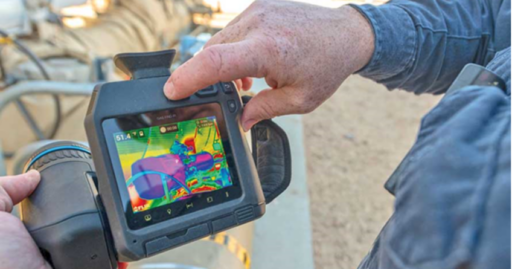 An OGI camera looks similar to a handheld camcorder with a screen for viewing the thermal images. However, proper training and education are necessary to get the most out of using an OGI camera. Features such as automatic GPS tagging and image enhancements can make a huge difference in visibility of small gas concentrations.

OGI cameras contain a lens, a quantum detector, some electronics to process the signal from the detector, and a screen or viewfinder to see the camera image. The quantum detectors require cooling to cryogenic temperatures (around -333°F). That’s cold!

The Science Behind the Camera

To see the gas, a unique spectral filter method is used to detect a particular gas compound. The filter is placed in front of the detector and is cooled with it to prevent any radiation exchange between the two components. In a technique called spectral adaptation, the wavelengths of radiation allowed to pass through to the detector are restricted by the filter along a very narrow band known as the band pass.

This technology allows an OGI camera user to detect gas leaks with great precision from a safe distance while meeting fugitive emission regulations. The use of optical gas imaging helps to further our focus on safe, responsible and sustainable operations.