Ohio Energy Leaders Agree – Energy Future is Not an “Either/Or” Moment, but an “And” Moment

Ohio’s natural gas and oil industry is committed to a dual track of lowering the industry’s carbon footprint while maintaining reliability and affordability, according to panelists at the Ohio Chamber of Commerce’s recent energy conference. Participants were confident that this is achievable through an all-of-the-above energy portfolio that unleashes domestic oil and natural gas while capitalizing on renewable innovation.

See more of the highlights from the day where Energy in Depth was reporting on the ground: 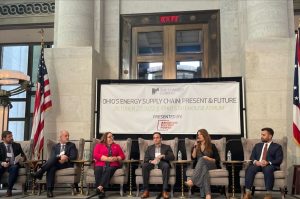 A key point reiterated was how Ohio – and the larger Appalachian region – is blessed with an abundance of natural gas resources by sitting on top of the Marcellus and Utica shales.

The region’s Shale Revolution has provided enormous direct and indirect economic benefits for the state including new markets, jobs, wage-growth, and more.

“The majority of our oil produced here in Ohio are going to Ohio refineries. Ohio made natural gas is running through these pipes…that means huge economic benefits.”  (emphasis added)

“We [the energy industry] exist to fuel our quality of life…from charging our cell photos to heating our homes. All of us working together are a key enabler for Ohio’s economy.”

“We’re investing in our system to make sure our customers have that safe and reliable energy system that fuels economic development. Connection of our pipes to those end use customers, to those people that create jobs and help our economy is critical.”

To hit this point home about the role Ohio energy plays in everyday Buckeye lives, Matt White with IGS said:

“Energy is important. If you look at the advancement of human society, we’ve lifted billions of people out of poverty.…we need energy to continue our lifestyle and continue lifting people up.”

A regulatory environment that provides certainty and stability for the industry was another key topic throughout the conference. While highlighting innovative steps taken to drive down methane and carbon emissions, industry leaders argued that a stable and fair regulatory environment allows for increased domestic production and the market to flourish.

Encino’s Stewart emphasized this point that EID has also covered extensively – if American energy is unleashed, it is cleaner and more affordable than when it’s done so overseas:

“These are uniquely American innovations…that’s why American producers are producing cleaner natural gas than anywhere in the world. So why would we not double down on that?…We’re ready, we want to unleash American energy. And we can and we will if we’re allowed to – and we’ll do it the cleanest the world has ever seen.” (emphasis added)

Heath Knakmuhs with the U.S. Chamber of Commerce’s Global Energy Institute also emphasized the impacts policies can have on consumers, referencing California’s recent blackouts and grid instability, as well as New England’s impending winter crisis due to insufficient pipeline capacity as “canaries in the coal mine.”

Knakmuhs argued that these cases should serve as a cautionary tale to policymakers and activists, warning about:

“…environmental groups pushing the retirement of what are environmentally friendly assets without anything to step up in its absence.”

This could lead to grid instability for a shortage of needed power. Instead, industry leaders from across the value chain emphasized the symbiotic relationship that exists between energy resources.

The overarching theme from the day was how many of these energy resources work hand in hand, not against each other, and that the future energy transition requires an all-of-the-above approach, including oil, natural gas, hydrogen, solar, wind, and more.

Enbridge’s Adam Parker emphasized the industry’s evolution that has led to a lower carbon footprint while still meeting energy needs:

“It’s not an ‘either or’ calculation. It’s an ‘and.’ Overtime our energy mix has always evolved…at our foundation we exist to improve quality of life. And we evolve with the times.” (emphasis added)

And when asked by moderators about the role natural gas will play in the future energy transition, industry leaders agreed that natural gas is here to stay, specifically highlighting natural gas’ ability to solve renewable’s intermittency challenges, something EID has covered time and again.

Bottom Line: Ohio industry leaders agree that an all-of-the-above energy policy is necessary for energy security and independence. Energy producers in the Buckeye State and across the country are continuously innovating, proactively bringing down their carbon footprint, deploying pioneering partnerships, and welcoming and working with new technologies – all while meeting families’ energy needs.

The post Ohio Energy Leaders Agree – Energy Future is Not an “Either/Or” Moment, but an “And” Moment appeared first on .