In a petition led by “Keep it in the Ground” actors such as the Sierra Club and Earthjustice, activists are demanding the U.S. Environmental Protection Agency (EPA) revoke Ohio’s Class II injection well program and put the state’s rulemaking authority back in the hands of the federal government.

However, the petition is backed by flawed logic that ignores Ohio’s consistent record of best-in-class oversight that has been proven to be even stricter than that of the federal government’s, meaning the petition in question would actually weaken Ohio’s operating standards.

Reminder: The classification of Underground Injection Control (UIC) parameters are set by the U.S. EPA and have been in place since the passage of the Safe Drinking Water Act in 1974. Ohio gained primacy of its UIC program from the EPA in 1983, and since the passage of HB 501 in 1985, Class II wells are recognized as the only safe and responsible method of disposal for brine and produced waters.

Since gaining primacy, Ohio has consistently been recognized for having rules more stringent than those set by the federal government. For example, federal regulations require one well inspection each year and a demonstration of mechanical integrity at least once every five years. In contrast, Ohio has unannounced inspections every 10-12 weeks and continuous mechanical integrity monitoring to ensure proper well functionality.

In addition, all new wells in Ohio are required to be continuously monitored and include an automatic shut-off device to terminate operations if the permitted maximum allowable surface injection pressure is exceeded, meaning they can be shut down at a moment’s notice if required. 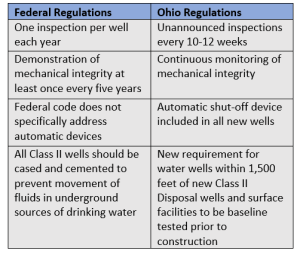 The EPA recognized Ohio for its injection well program in 2015, praising the Ohio Department of Natural Resources’ regulatory program as “good quality.” And since being early movers in 2015, Ohio’s regulations have only improved. A peer review of Ohio’s Class II program conducted by the Ground Water Protection Council in 2017 underscored this:

“The DOGRM UIC program has continued to operate effectively since primacy was approved, however, a number of major changes have occurred through the years which have served to strengthen an already strong UIC program.” (emphasis added)

Boosting this even further, just this year, new chapters of the Ohio Administrative Code governing Class II wells and oil and gas waste facilities took effect, providing even more stringent oversight on areas such as well pressure, corrective action, permitting, public notice, and enhanced inspections – many of which are cited as unsubstantiated areas of concern in the activists’ petition.

In responding to the petition, ODNR’s Stephanie O’Grady emphasized their regulatory oversight:

“The federal agency has consistently reaffirmed that Ohio operates an effective regulatory program that meets federal standards and protects public health, safety, and the environment. The division takes our responsibility to protect Ohio’s groundwater, surface water, and environment seriously, as demonstrated by our rigorous permitting process, regular inspections, and enforcement.”

This regulatory care also extends to Ohio’s water management and seismic oversight. ODNR’s Seismic division continuously monitors activity in real-time across Ohio, receiving data from more than 90 stations, to determine if any recorded seismic events may be related to oil and gas well completion or injection activities. This division is widely recognized as a national model. More from the GWPC peer review:

“Ohio has been a national leader in this effort through such measures as establishing an extensive seismic monitoring network, placing stringent requirements on new permits, and not allowing injection into deep formations in areas of seismic concern.” (emphasis added)

On water management, Ohio’s Class II injection wells require multiple layers of protective steel casing and cement, safeguarding water quality. In the same release praising ODNR’s oversight, the EPA cited Ohio’s “strong protections” for underground sources of drinking water. The result of these protections? Since Ohio was granted primacy, there has not been a single case of groundwater contamination.

The Shale industry has been a game-changer for Ohio and the greater Appalachian region, creating a boom of jobs, industry, wage growth and more. Yet conveniently ignoring this, the activists also claim in the petition that Appalachia and Eastern Ohio have been disproportionately affected by the state’s oil and gas activity, and that “environmental justice” is needed:

However, this ignores crucial context. First, it’s simple fact that Eastern Ohio is where the Marcellus and Utica Shale lie, so it makes sense that this is where the majority of Ohio’s natural gas activity, and therefore proximity sites, would be located. This is geography, not some grand scheme by the industry. 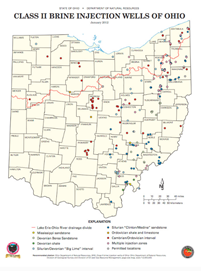 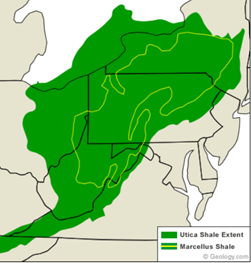 (Maps from ODNR and Geology.com)

Second, Appalachia and Eastern Ohio have reaped the benefits of Ohio’s Shale Revolution. According to the Ohio Department of Job and Family Services, the industry employs more than 208,000 workers with good-paying, family sustaining jobs – many of those workers in the Appalachian region. In fact, the average wage in core oil and gas related industries is $81,749, higher than the average wage in all Ohio industries: $51,740.

Additionally, the Ohio Oil and Gas Energy Education Program shows the industry has paid a total of $8.6 billion in royalty payments to Ohio landowners – again primarily in the Appalachian region.

What’s more, a Cleveland State University report details that from 2011 through June of 2021, Ohio’s oil and natural gas industry has invested an estimated $95.3 billion into Ohio – money that in turn helps fix roads, fund schools, and overall improve the state’s landscape.

Petition Led by Familiar “Keep it in the Ground Activists”

It’s worth noting that the lead petitioners attempting to upend Ohio’s well program are from the Sierra Club and Earthjustice, both of which have a long history of promoting “Keep it in the Ground” activity that seeks to shut down America’s oil and natural gas production, despite the industry’s successes in providing families with affordable, reliable energy while also decreasing its carbon footprint.

Therefore, it should come as no surprise they are ignoring Ohio’s long history of industry-leading standards and economic viability for their own narrative.

Bottom Line: Familiar cries from opponents of the natural gas boom are attempting to distract from Ohio’s longstanding, superior management of Class II wells. The reason states are granted primacy authority is because of the unique geologies and ability to implement stricter regulations than that of the federal government. A one size fits all approach actually weakens the system when working with diverse geographies and challenges.

Attempting to throw more government red-tape at a manufactured problem during a time when bad policies and the global energy crisis are being felt here in the Buckeye State is case in point for groups that are singularly focused on destroying domestic energy production – despite the negative effects it would have on energy security, prices for Ohio families, and the overall Appalachian region.

The post Ohio Leads the Way in Responsible Oversight of Natural Gas Operations appeared first on .