Natural gas and oil continues to be an economic lifeblood for Ohio, according to a new report released today by JobsOhio and Cleveland State University. The report shows that since the beginning of the Shale revolution in 2011, the natural gas and oil industry has invested nearly $100 billion into the Buckeye State, while also leading the nation in growth for the fourth consecutive year.

This incredible surge of investment is thanks to the energy-rich resources beneath Ohioans’ feet in the Marcellus and Utica shale reservoirs that are providing Ohioans with family-sustaining jobs and wages, while helping to fuel our Ohio communities and the world. 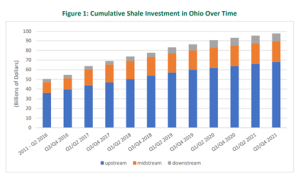 “The cumulative investment in shale gas development over time has brought thousands of jobs to hard-working Ohioans and affordable energy to residential and industrial consumers. Ohio has the resources, the regulatory environment, the talent, and the central location to continue to evolve as an international player in shale-related productivity.” (emphasis added)

“Our natural gas and oil energy industry is something Ohioans can be proud of. This report shows not only all the work the men and women of this industry are doing, but the immense benefits that are brought to communities across Ohio.” (emphasis added)

Additional highlights of the report include:

“Altogether, shale-related investment in Ohio for the second half of 2021, including upstream, midstream, and downstream, was around $2.5 Billion.”

Land Royalties: “Total estimated royalties spent on Ohio properties between July and December 2021 were nearly $1.2 billion, about 14% higher than the amount dispersed in the first half of 2021.”

New Drilling: “A total of 86 new wells were listed by the Ohio Department of Natural Resources…during the period of July 1 to December 31, 2021. This represents a 16.2% increase in new well development compared to the first half of 2021.”

Importantly, JobsOhio and Cleveland State University also showcased how Ohio’s vast natural gas resources are helping to lead the nation in growth, with the greater Ohio Valley poised to produce 45 percent of the country’s natural gas:

“The Marcellus and Utica shale formations have become a national center of natural gas and natural gas liquids production. This resource base will play a key role in satisfying America’s increasing reliance on natural gas, according to an IHS Markit study. The projected savings linked to processing natural gas liquids such as methane, propane and butane in the tri-state region of Ohio, Pennsylvania and West Virginia rather than the Gulf Coast are expected to range from 6 percent to 26 percent.” (emphasis added)

This savings advantage and proximity to vital resources is also helping to attract manufacturing and other critical industries to the state.

According to JobsOhio’s Matt Cybulski, Director of Energy and Chemicals:

“Vast shale resources are attracting many energy investments – from upstream extractors and fractionators/processors to downstream power generators and complex chemicals companies. We believe it is important to track these developments and share the findings with companies currently in Ohio and those looking to invest in Ohio.”

Bottom Line: Ohio’s energy industry has contributed nearly $100 billion to the state’s economy in the past decade, which directly helps improve roads, schools, and other vital infrastructure and resources. This ongoing investment is critical to providing families with affordable and reliable domestic energy, which has shown to be more important than ever amidst a  year marked by high energy prices, changing geopolitics, and energy instability.