Global energy markets will most likely not experience a “V-shaped” recovery from the Covid-19 pandemic, according to Royal Dutch Shell’s CEO Ben van Beurden.

He told IHS Markit’s vice chairman Daniel Yergin, in an online interview published on Thursday, that the current crisis is likely “to have a permanent know for years.”

“We are seeing a resurgence of motor gasoline particularly in those areas where people don’t like to rely too much on public transport and therefore, we will see a little bit more use of personal transport. But in general, energy demand and certainly mobility demand will be lower even when this crisis more or less (is) behind us,” he said, adding it may be too early to say.

The outlook for natural gas is the same, the CEO said, adding the knock seen on gas demand “is going to stay with us for some time,” Kallanish Energy reports. 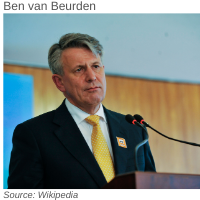 “In the long run, gas has the long-term potential to grow faster than any of the hydrocarbon energy carriers that we have around. But it will be inevitably delayed because gas demand that we have missed out will not be made up,” said van Beurden.

As the pandemic weakens the global economy and raises uncertainty, investments that once looked “quite strong” such as North American LNG projects, “now all of a sudden” don’t look as strong anymore, he said.

“The world can probably be net-zero by 2060. But if you are a European company, advanced economies need to be ahead of the curve when it comes to carbon neutrality; so, the EU setting a target of carbon neutrality by 2050, the UK, we felt that we had to do something similar,” he explained.

The Anglo-Dutch supermajor is investing and developing biofuels, low carbon electricity, and hydrogen, but it’s also thinking of other ways to reduce emissions while ensuring its business continuity.

“Think of the other tools that we can have in the toolkit like nature to mitigate the intrinsic carbon footprint of our products; or carbon capture and storage. Yes, these will be business opportunities for us as well,” he said.