[Editor’s Note: Our friend Jason Spiess, host of The Crude Life, has now created ESG University, where the dangers of ESG and those who are relentlessly pushing it are regularly exposed. He addresses a serious issue using his own distinct brand of humor.]

The headline from Patagonia’s announcement reads “Earth Is Now Our Only Shareholder”.

The owner, Yvon Chouinard made this global announcement earlier in the week igniting social media with speculation and platitudes.

In addition to Chouinard’s announcement on Patagonia’s website, he did an exclusive interview with the New York Times publicly announcing that he’s “giving away his company to support environmental protection”.

The rock-climber-turned-businessman who has has a history of progressive corporate environmentalism, told the Times that he wants to “give away the maximum amount of money to people who are actively working on saving this planet.”

In what is meant to be a development for green capitalism, one has to point out the obvious public relations splash as well as pushing the ESG narrative into new potential smoke screens. 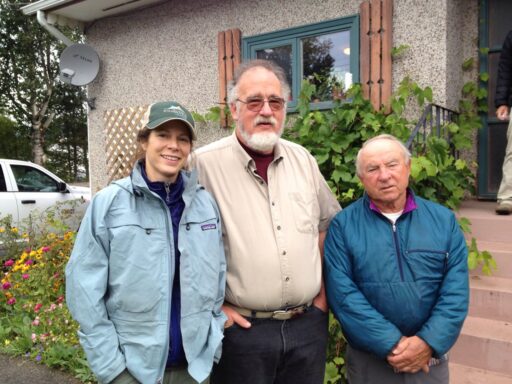 The short unhappy looking fellow on the right, dressed in an expensive Patagonia jacket made with natural gas, is the pious profiteer Yvon Chouinard

The Chouinard family gave all the “nonvoting shares” of Patagonia to a newly formed nonprofit called the Holdfast Collective. The nonvoting shares are currently worth about $3 billion, making the nonprofit an immediate player in multiple sectors of the ESG economy.

Patagonia the company will stay a for-profit business, but those profits, which amount to around $100 million a year, will now go entirely to the Holdfast Collective. A trust now owns the family’s voting shares, which comprise about 2% of the company, and the Chouinard family and its advisers will be in charge of this trust.

Instead of “going public,” you could say we’re “going purpose.” Instead of extracting value from nature and transforming it into wealth for investors, we’ll use the wealth Patagonia creates to protect the source of all wealth.

Here’s how it works: 100% of the company’s voting stock transfers to the Patagonia Purpose Trust, created to protect the company’s values; and 100% of the nonvoting stock had been given to the Holdfast Collective, a nonprofit dedicated to fighting the environmental crisis and defending nature. The funding will come from Patagonia: Each year, the money we make after reinvesting in the business will be distributed as a dividend to help fight the crisis.

It’s been nearly 50 years since we began our experiment in responsible business, and we are just getting started.

There is even a trendy section devoted to the announcement titled “Reimagining Capitalism.”

While Patagonia attempts to take control of the narrative to “reimagining capitalism,” this economic manipulation has been done before.

A professor at NYU’s School of Law, Daniel Hemel, Tweeted that a businessman named Barre Seid used a nearly identical formulation of tax benefit manipulation to transfer $1.6 billion to Leonard Leo, an activist who played a mojor role in the successful push to secure a conservative supermajority on the Supreme Court, leading directly to the environmental decision West Virginia vs. EPA.

Furthermore, Bloomberg cites that, the Chouinard would have been slapped with some massive fees if the sale of the $3 billion company would have happened through traditional capitalism. However by “reimagining capitalism” this move saves $700 million in capital gains tax, while his heirs would have had to pay some 40% in estate tax if the company were transferred directly to them.

As it stands, the deal still costs some $17.5 million in gift taxes for Chouinard. That’s a hefty sum, sure, but given the other possibilities it was the best path to take.

This week’s announcement and sale makes Chouinard poorer on paper, but the strategy to set up a nonprofit and a trust controlled by the family is all part of the new ESG Economy and Reinvention of Capitalism.

This move ensures that the company’s cultural capital now comes with a powerful donor arm that can exert influence in the policy space. Just like the Bill and Melinda Gates Foundation, Jeff Bezos’s Earth Fund and Mark Zuckerberg’s Chan Zuckerberg Initiative.

Oh, and it should be mentioned too that these altuistic nonprofits are also a 501(c)(4). Not 501(c)(3). A C4 allows the nonprofit to directly participate in political giving.

What’s lost in this whole announcement is that those profits and company could have been Employee Owned or given to established grass roots nonprofits, but those people and companies are not controlled by the Chouinard family and their interests.

Welcome to the new ESG economy where the owner of the company doesn’t own it, but controls it, profits off it and gets to use it for political posturing.

Questions on today’s lesson?  Do you have an ESG University story idea? Email: . The ESG University is also a reader-supported publication. To receive new posts and support Jason’s work, consider going here become a paid subscriber.