Today is the day! The PennEast case over whether New Jersey can arbitrarily stand in the way of interstate pipelines reaches the Supremes!.

Today, the United States Supreme Court will hear arguments over whether New Jersey’s tyrannical, but ever politically correct, government, led by the Phil “Pander Bear” Murphy, the Wall Street goon turned governor, can arbitrarily stop the PennEast Pipeline. I’ve written about the case several times, most recently here, but today is when the talk meets the questions as the Supremes hear oral arguments. 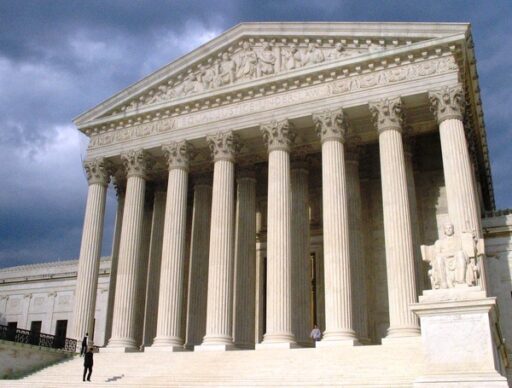 Interestingly, the Biden Administration Department of Justice has lined up with PennEast on this one and is making the point that resonates most strongly with me; namely that New Jersey is claiming its flimsy farmland conservation easements trump any rights of over states to infrastructure that would deliver gas to them, despite the fact there is nothing incompatible about pipelines and farms. If allowed this maneuver would be used by every pipeline in every state to throw up roadblocks to much needed pipelines.

Here is the PennEast news release on what’s happening today:

The Biden Administration is no fan of fossil fuels. But even it disagrees with New Jersey’s slick argument in a case the Supreme Court will hear Wednesday that the Constitution gives states a veto over interstate gas pipelines that trumps federal regulatory and judicial review.

At issue in PennEast Pipeline Co. v. New Jersey is a 116-mile pipeline between Pennsylvania and New Jersey. The Federal Energy Regulatory Commission (FERC) approved the pipeline after a two-year review that involved more than 200 meetings with public officials. Some 70 variations were made to the route during the review.

Yet New Jersey argues in the case now before the High Court that the Eleventh Amendment prohibits states from being sued by private parties in federal court. Ergo, PennEast Pipeline can’t use FERC’s eminent domain delegation to condemn state sovereign property in federal court.

But as the acting U.S. Solicitor General explains in a brief supporting PennEast, New Jersey is waging a “collateral attack” on FERC’s authority and the regulatory scheme Congress devised in the Natural Gas Act. New Jersey claims only partial ownership and control over 40 of the 42 parcels at issue.

It would be virtually impossible to build a pipeline that doesn’t traverse a parcel that New Jersey doesn’t claim to control. The same is true in every state. Under New Jersey’s argument, any state could block a FERC-approved pipeline simply by refusing to grant a developer access to property it claims to control.

This was what Congress sought to prevent when it amended the Natural Gas Act in 1947 by delegating the federal government’s eminent domain power to pipeline companies. Congress’s eminent domain delegation was intended to stop states from interfering with interstate commerce.

As I have written before, the legal issue presented by this case can be very narrow. Specifically, the Supreme Court has been asked to decide whether the Natural Gas Act (NGA) “delegates the federal government’s eminent domain power to Federal Energy Regulatory Commission (FERC) certificate holders and allows them to sue a state to condemn land in which the state claims an interest, or whether the Eleventh Amendment immunizes states from such lawsuits”.

In truth, however, the issue in this case is extremely broad. The true issue is whether individual states have the power to supplant the judgment of the federal government and its administrative agencies and in effect set national policy on a state-by-state basis…

While the PennEast case pertains directly to New Jersey’s claim that it has interests in certain lands that preclude the FERC certificate holder, PennEast Pipeline Co., LLC, from taking those lands by eminent domain, if sustained its real effect would be to give each state along an interstate pipeline route the right to dictate if that pipeline can move forward, even after approval has come from the very agency responsible for making these policy decisions – FERC. Indeed, this is not the first attempt by individual state governors to control American national energy policy.

For example, New York Governor Andrew Cuomo has famously used the Section 401 Clean Streams Certification process in the Federal Clean Water Act to block interstate oil and gas pipelines from being built – in effect blocking New England from receiving oil or gas from the rest of the country. Also, Michigan Governor Gretchen Whitmer last December claimed that Canada had violated a 1953 easement agreement and ordered Enbridge ENB +1%, the Canadian pipeline company, to cease operations on its long existing Line 5 Pipeline from Canada, infuriating the Canadians. There are other examples. Governors now seek to control American foreign policy as well as national energy policy.

And, suffice to say, that cannot be permitted, so let’s today goes well for the PennEast!