[Editor’s Note: It’s only a matter of time before New Jersey will pay a huge price for obstructing the PennEast Pipeline project. They’ll be screaming for our LNG soon, in fact.]

Developers of PennEast Pipeline between northeastern Pennsylvania and New Jersey today announced that they are ending development of the 116-mile project. The decision to pull the plug comes just three months after the project team secured a key win before the U.S. Supreme Court.

The project has not been able to obtain the necessary state permits for development, even though it had secured approval from the Federal Energy Regulatory Commission.

The Pennsylvania Department of Environmental Protection (DEP) hosted a virtual public hearing on two permit applications for construction of Phase 1 of PennEast in northeastern Pennsylvania in January. That portion of the PennEast project comprised a 68-mile stretch of 36-inch diameter pipe in Carbon, Luzerne, Monroe and Northampton counties. Phase 2 was planned for New Jersey.

This is a disappointing decision that highlights the need for a more streamlined and reasonable regulatory approach to pipeline development. Pennsylvania now will lose its share of what was expected to be $1.2 billion in investments.

Ending this project does nothing to change the equation. Demand for clean-burning natural gas remains high. The pipeline constraints that currently limit market access will only grow worse without projects like PennEast, which was designed to meet the clear public need by businesses and consumers for reliable, affordable energy.

Editor’s Note: Kurt’s observation with respect to natural gas demand is 100% correct. The natural gas price at the end of business yesterday was $5.71 as you can see here: 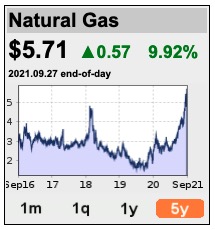 Yes, price is a measure of demand and demand for American natural gas in Europe is booming because Germany has been a decade or so ahead of New Jersey in pursuing green energy fantasies with the result prices there have exploded and the Huns have, once again, made themselves vulnerable to squeezes by the rambunctious Russian bear. The alternative now is our LNG and that’s where our gas will go rather than annoying New Jersey. New Jersey will share this problem today and, thanks to its PennEast obstruction, experience greater problems in the future. We can ship the New Jersey nutters our LNG sooner rather than later, of course, but let’s first play the dancing bear game for a bit, don’t you think?