Gordon Tomb talks about the need for Pennsylvania energy markets to operate freely if our energy consumers are to enjoy the benefits of innovation.

Pennsylvania energy markets operate as a mix of free market elements and over-regulation, alternatively blessed by the fruits of the former and cursed by the noxious burden of the latter.  Consider how some of the state’s energy sources have evolved: 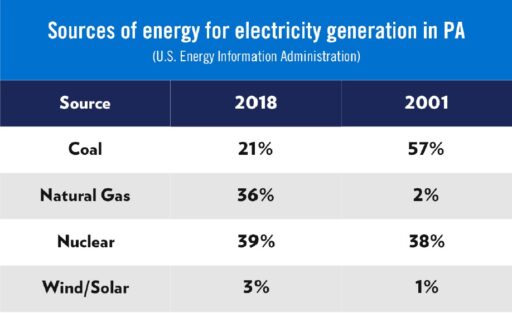 According to the U.S. Energy Information Agency, wind and solar have increased their share of the state’s electric-generation market from one percent in 2001 to less than three percent in 2018 despite being heavily subsidize. Meanwhile, natural gas has grown its share from two percent to 36 percent over the same period as a result of free-market innovations in gas drilling, which have produced huge quantities of gas at low prices.

Another feature of Pennsylvania’s energy sector is the deregulation of electricity production, requiring Pennsylvania generators to compete for buyers.

According to the Pennsylvania Manufacturers’ Association, Pennsylvania electricity rates were 15 – 20 percent higher than the national average prior to the state’s transitioning to a more competitive market in the 1990s and are now five to eight percent lower than the average. That is a swing of as much as 28 percentage points.

A national energy analyst and former member of the Montana Public Service Commission, Travis Kavulla, says Pennsylvania is a model for competitive energy markets and lower electricity prices.  Last year, Mr. Kavula described a proposal to subsidize nuclear plants as a mistake that would “grab defeat from the jaws of victory.”

That can be said of any energy subsidy. In other words, whatever good comes from deregulation is undermined by subsidies that drive prices higher.

And Pennsylvania does have energy subsidies through its  Alternative Energy Portfolio Standards. Enacted in 2004, the standards require utilities to buy a percentage of their electricity from sources such as wind and solar at higher prices that are ultimately paid by the consumer.

These mandates raise the cost of living and make it harder for people to find work, according to a 2016 study by the Rhode Island Center for Freedom and Prosperity. The report found that the standards will have raised energy costs by $700 million and eliminated 11,400 jobs by 2025.

Yet, Gov. Wolf is proposing to institute another subsidy for non-fossil fuel generators by taxing producers of electricity on the basis of how much carbon dioxide their power plants emit. The stated purpose is to counter so-called global warming.

If you were to eliminate all emissions of carbon dioxide in Pennsylvania the amount of global warming averted by 2100 would be .0079 degree Fahrenheit.

These numbers represent theoretical, meaningless quantities that are impossible to measure. Nevertheless, for this so-called benefit, the governor wants to impose the cost of a carbon tax on consumers.

A carbon tax imposed in 10 Northeast and Mid-Atlantic states over the last decade has been a dismal failure, according to analysis by David Stevenson of the Delaware-based Caesar Rodney Institute.

Subsides, including carbon taxes, are destructive. Markets unencumbered by government as much as possible are by far a better approach.

Note: Gordon Tomb is a senior fellow for the Commonwealth Foundation, a Pennsylvania-based, free-market think tank.