Here are some of the poll’s highlights:

Despite vocal activism which attempts to demonize fossil fuels, only a relatively small share of Americans believe that the United States should phase out the use of these energy sources.

The polling found that while more than twice as many Americans (69 percent to 30 percent) would prioritize alternative energy development over expanding fossil fuel production, more than two-thirds want the United States to keep fossil fuels as part of its fuel mix. 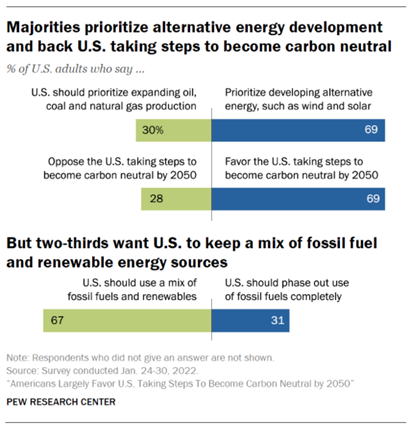 The reluctance to abandon fossil fuels is in part because Americans are concerned that replacing these energy sources with significant amounts of renewables would cause “unexpected problems.” According to the Pew poll, seven-in-ten Americans said that it was “very” or “somewhat likely” that a major shift away from fossil fuels would cause problems in the next 30 years.

More specifically, about a third (35 percent) of Americans fear negative economic effects (lost jobs and higher prices) from an energy transition, while about one-in-five (21 percent) are concerned about grid reliability.

The concern about reliability something that has been echoed by experts and regulators, including former Federal Energy Regulatory Commission (FERC) Chairman Neil Chatterjee, who warned last summer that a rapid switch away from natural gas generation could make electricity more expensive and less reliable. Chatterjee credited affordable, reliable natural gas with keeping electricity prices low and said:

“It’s crucial that we don’t put ourselves in a position where we are accidentally driving out competitive resources that are needed to maintain reliability. But I fear that’s the direction we are heading.”

Some of these impacts to reliability have already been seen in states that have taken aggressive action to decarbonize their electric grids—most notably California. In pursuit of ambitious climate goals, California has been closing natural gas plants, a situation which pushed the state into an “electric reliability emergency” last fall. A similar situation is hitting New Englanders this winter, as the region suffers price spikes and threats to reliability because of its limited natural gas infrastructure.

Over the past decade, emissions from electric power generation have sharply decreased—thanks largely to the abundant supply of clean-burning natural gas supplied by the shale revolution. This poll demonstrates that Americans understand that we can both lower emissions and ensure grid reliability and affordability in the future energy mix.