Philadelphia Has A Great Future, If We But Welcome It – Part III

[Editor’s Note: Garland Thompson and his associate John Linder lay out an extremely compelling case for the Philadelphia economy if only it will have it.]

On the eve of a new presidential administration, my colleagues and I on the downstream end of the business decided to send out messages that might make sense to government and community leaders in the Lower Delaware Valley who haven’t heard a fair description of the bigger picture this industry represents. We’ve sent the following missive to Barry Seymour, Executive Director of the Delaware Valley Regional Planning Commission, which oversees development projects all over the region. Part I was posted here the day before yesterday and Part II yesterday. Here’s Part III, the final part of our letter. 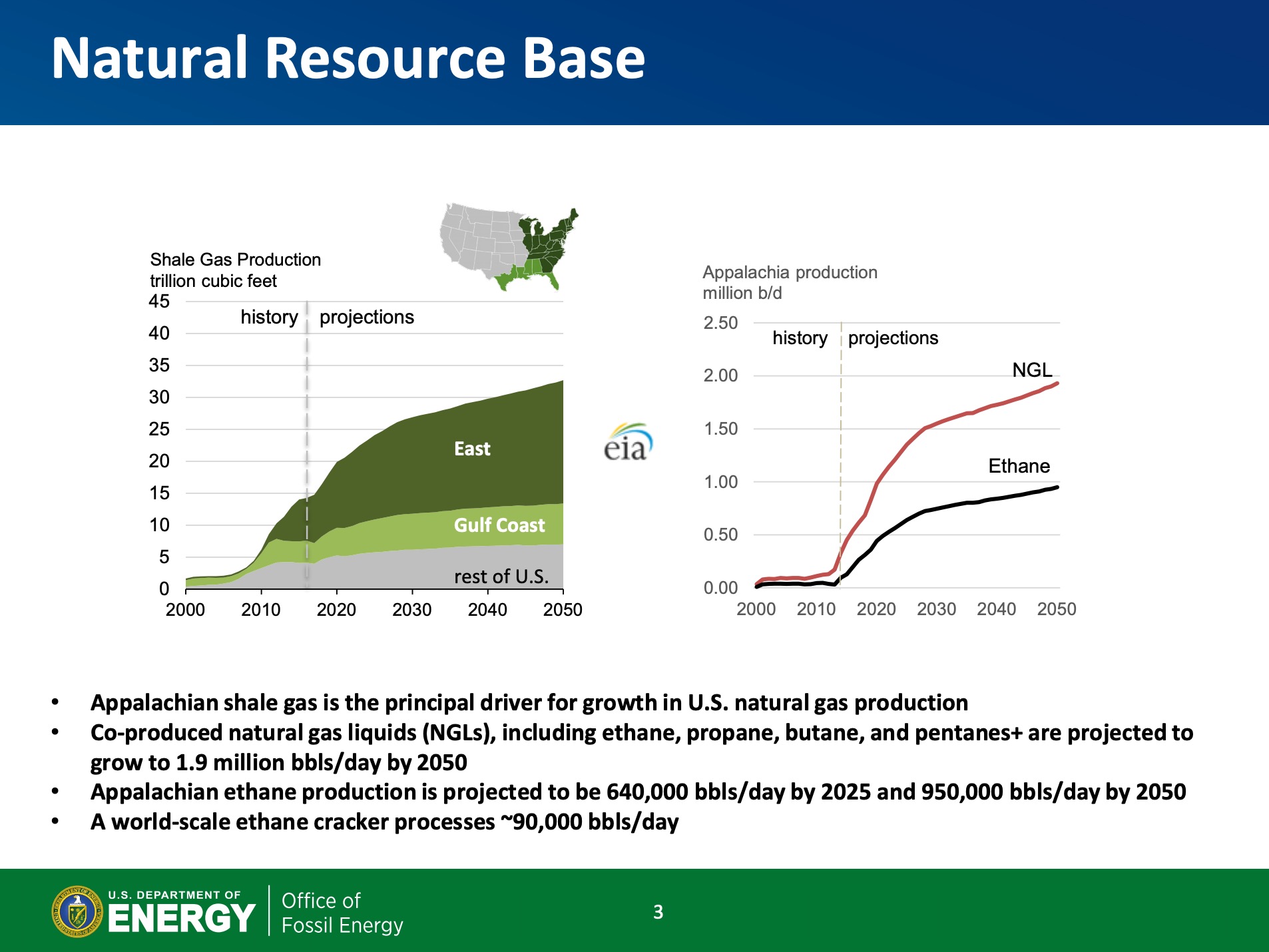 23. Climate change is happening, to be sure. But a close reading of the reports by the International Energy Agency, an arm of the United Nations, shows that IEA analysts recognize Americans’ rapid shift from the burning of coal to natural gas for electric power has made the United States the world leader in reducing the release of carbon dioxide into the atmosphere. That happened even though the U.S. Congress refused to ratify the Paris Accords on carbon reductions.

24. That is, America’s technology-driven shale gas revolution and the resulting shift from coal-fired power production to gas-fired power has produced an environmental good, which the activists pushing for a “Green New Deal” continue to discount.

25. Worse still, it’s clear that the gas reserves prised out of underground rocks by drilllers into the Marcellus and Utica Shales under the Appalachian Mountains of Pennsylvania, West Virginia, and Southeastern Ohio – now recognized by agreement of the three states’ governors as the “Shale Crescent” energy-production region – cannot be kept in the ground. Pipelines already exist to take that methane and its associated natural-gas-liquid components away from the Shale Crescent states to Canada and the Gulf Coast.

26. You may be excused if you’ve never heard of Mariner West, a pipeline whose carrying capacity dwarfs the three pipelines of Sunoco’s Mariner East project, hauling natural-gas liquids north to petrochemical works and plastics makers in Canada. That’s because our local Delaware Valley media workers – including the members of the Philadelphia Inquirer’s august Editorial Board – have never made the effort to inform local residents that others, far outside the Delaware Valley, have geared up to take advantage of the bountiful resources flowing out of the Shale Crescent’s Marcellus and Utica Shale wells.

27. ATEX, the Appalachia-to-Texas transmission line, which also carries bigger quantities of Ohio Valley natural-gas liquids South, to the petrochemical works lining the Houston Gulf Coast shoreline, also has escaped local media notice here. That line, built to supply the steam “crackers” producing polyolefin fractions of ethane and the propane “de-hydrogenators” producing feedstocks for heavy plastics, hospital PPE, and other products, now is undergoing expansion to supply even bigger quantities of Shale Crescent riches to the Gulf Coast industries, while Delaware Valley’s job-seekers are being told – by the city’s biggest newspaper, among other highly vocal critics – that such industries should not be developed here.

28. Neither Mariner West nor ATEX is subject to the activism that has greatly slowed Mariner East’s progress toward its eventual completion in 2021, half a decade since inception of Sunoco/Energy Transfer Partners’ $3.5-billion project to cross the Commonwealth. Unnoticed and unappreciated here, the tangible result of that three-line Mariner East transmission system’s operational success – supplying a projected ethane “cracker” and “de-hydrogenator”1 fueled by the developing Adelphia Gateway pipeline’s transmission south of low-cost methane from Cabot Energy’s Susquehanna County fields — will someday power dramatic growth in Southeast Pennsylvania’s chemical manufactory, “Downstream Industry” growth predicted in the Team Pennsylvania foundation’s prescient report on future petrochemical industry expansion, mentioned above.2

29. And to be sure, it’s not just the folks on the U.S. Gulf Coast who are taking advantage of the Shale Crescent’s bountiful resources, while Philadelphia dithers. Marcellus Drilling News, an energy blog put out by a New York journalist, recently brought the news that a half-billion-dollar bet is being made by investors developing a new petrochemical plant to convert Marcellus Shale gas into feedstock used in the manufacture of agricultural chemicals, pharmaceuticals, and transportation fuels in Clinton County, Pennsylvania. Originally known as the KeyState Natural Gas Synthesis & Carbon Capture Plant, its construction is to employ 600 to 800 workers and support 150 to 200 permanent jobs for the kind of “Gold Collar” workers now found in Gulf Coast petrochemical plants. As a recent Houston Chronicle article said, these workers, gaining their skills in two-year Junior College craft-skills programs and craft-union apprenticeship programs, earn six-figure incomes producing the base chemicals that support plastics making, synthetic rubber products, polyester fiber products, and a whole host of other consumer products in use everywhere.

30. This new plant, which will employ onsite carbon capture and geological storage, also will produce hydrogen for zero-carbon-emission fuel.3

31. Next door in Ohio, the Shale Directories online newsletter reports that researchers at Cleveland State University have published findings that shale-related investments in the Buckeye State have scored a $9-billion increase from 2018 to the fourth quarter of 2019, showing the natural-gas industry’s importance to Ohio’s economy.

32.“ How important has shale development and fracking been for Ohio,” the newsletter asked? “The development of the Utica Shale play in Ohio has turned the state into the fifth-largest producer of natural gas in the United States. This massive increase in domestic shale development, led by fracking, has caused natural gas prices to plummet in Ohio, saving state residents and businesses more than $40 billion from 2006 to 2016, according to a September 2018 study from the Consumer Energy Alliance. This is backed up by a September 2019 report prepared by Kleinhenz & Associates for the Ohio Oil & Gas Energy Education Program showing total savings thanks to fracking for Ohio residents from 2008 to 2018 amounted to $45 billion. Additionally, the oil and natural gas industries supported more than 262,800 jobs in Ohio in 2015, producing $14.7 billion in wages and $37.9 billion in economic impact, according to a 2017 study by PriceWaterhouseCoopers.”

33. Even farther away in Scotland and Norway, INEOS, the British-owned company that spent $2 billion building tankers to collect and take to plants 3,800 miles away the output of Sunoco/Energy Transfer Partners’ Mariner East pipelines, has decided to invest another $3.5 billion to expand an existing ethane “cracker” to make feedstock for its plastic plants, and to construct a new “de-hydrogenator” to turn Marcellus and Utica Shale propane into even more plastics feedstock.

34. The beat goes on. Marcellus Drilling News’ Jan. 8, 2021 story, “U.S. LNG Exports Set New Record High in December,” reported that federal Energy Information Administration tables say American exports of liquefied methane to distant users overseas averaged 9.8 billion cubic-feet per day in December 2020, a new all-time record. Much of that methane comes from the Shale Crescent, but not from the Ports of Philadelphia, where opposition to pipeline construction prevents development of an LNG export port on Pennsylvania’s side of the Delaware.

36. What does all this mean? It means that the efforts by protest groups like Penn Futures in Philadelphia and its allied supporters in the Riverkeeper Network, Sierra Club and the like, — however well-meaning — cannot succeed in keeping the Shale Crescent’s gas reserves in the ground. While residents of Greater Philadelphia are inundated with loud protests over efforts to complete the development of Energy Transfer Partners’ Marcus Hook Industrial Center, the pipelines serving it with LNG feedstock, and other supply lines like Penn East, designed to boost uses of natural gas, cut consumer costs, and replace uses of higher carbon-dioxide-producing fuels in New Jersey, residents of other regions are gearing up to gain new economic advantages from the energy wealth Philadelphians are being urged to eschew.

37. It means that political leaders as well as business leaders in those other regions, overseas as well as in the U.S., recognize that the modern American lifestyle depends on use of the products petrochemical industries manufacture, and are determined to get more of their citizens employed in those industries, while the Philadelphia region’s residents quibble.

38. It means that it is long past time the leaders of Greater Philadelphia recognize the real opportunities lying in wait for a city and a region that could and should serve as the most convenient, most economical port for the export of Shale Crescent LNG, when the best fields producing that gas lie less than 200 miles to the northwest in the Endless Mountains region of Pennsylvania, producing cargoes that should properly be headed to North Atlantic and West African ports from Philadelphia, not from Corpus Christi.

39. It means that Greater Philadelphia, which the Team Pennsylvania Foundation’s report and others tell us holds a greater share of America’s plastics makers, pharmaceutical plants and other chemical manufacturing works than any region except Chicago, should right now be experiencing the kind of economic growth recorded in Houston, which now is crowing over surveys that show it’s the nation’s hottest market for new-home sales.

40. It means, after all, that it is long past time Greater Philadelphia leaders like yourself began to focus on the industries that can power Philadelphia’s economy far into the 21st Century, fueled and supplied by the resources flowing out of the ground in our own Commonwealth and its neighboring Shale Crescent states, resources that arise closer to Philadelphia than to any other major metropolitan area, closer than any other ocean port.

41. We at Riverside Futures Regional Community Development Corporation stand ready to work with progressive leaders like yourself to help build the groundwork through public information campaigns, development of enhanced job-readiness and job-skills training programs, and enhanced support of K-12 education programs, and we have ideas we would like to discuss with you and other municipal leaders.

There is a very big job ahead of us and all the residents of the Philadelphia area. It will take a concerted effort, by all relevant hands, in education, business, labor and government, to get the work done.