Pipelines Delayed Yield Some of Highest Energy Prices in the Nation

Delays, obstruction and cancellations of pipelines in the Northeast for the sake of green virtue signaling are creating high energy prices.

That Consumer Energy Alliance (CEA) report illustrating the cost of the pipeline infrastructure war, which we covered a few days ago includes a wonderful section on New Jersey, New York and Pennsylvania. Key excerpts from that section follow: 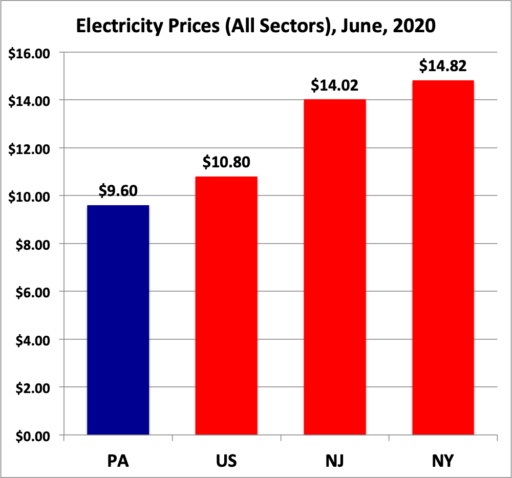 Activism and regulatory intransigence in New York, New Jersey, and Pennsylvania against infrastructure is:

New York State’s regulatory intransigence and refusal to allow any new pipeline infrastructure to pass through its geography is having drastic economic effects on its own economy and that of neighboring states.

New Jersey’s similar politically motivated energy policies appear to ignore the economic harm they are causing. Both states have denied opportunities for Pennsylvania’s energy to reach other markets in the most affordable fashion, and are blocking billions in energy savings to consumers and industrial customers. Even more importantly, the delays and denials are removing immediate opportunities to put natural gas into service to replace higher-emitting fuels, therefore are blocking rapid environmental gains.

After COVID-19 struck, the city that never sleeps finally slept under lockdown. As cases surged in the first three months of the pandemic, the cascade effect across the economy of New York, both city and state, was severe. In June, federal data showed the unemployment rate had risen to 15.7% from 14.5% in April, counter to the trend in many states of an April unemployment peak. This economic and public health hardship is compounded by the fact that New York’s residential electricity rates in May were 43% higher than the national average and the highest in the country after Hawaii, Alaska, California and New England as group.

While New York suffered, so did its neighbors in New England who saw high electricity rates in part because New York has refused for years to let any new and needed pipelines pass through the Empire State to the Northeast. This led directly to bottlenecks and unnecessarily higher prices similar to those found in geographically remote areas like Hawaii and Alaska. That, for example, has forced Massachusetts in the past to bring in Russian LNG to meet demand, when an ample supply of American gas is barely four hours’ drive away.

That same punishing energy policy hurts New Yorkers. The state consistently faces natural gas supply issues, which has led to service moratoria – particularly in the New York City metropolitan area and Long Island. Temporary solutions have been offered to address pipeline capacity shortfalls but the state has persistently blocked new infrastructure from being built, even if it would help lower carbon emissions and provide economic relief to families and consumers.

This refusal to build any pipeline infrastructure – but especially natural gas – on environmental and power generation grounds is confounding, since carbon emissions from the electric sector in New York are down 55% since 1999 while the use of natural gas has increased. It’s also placing a large burden on downstate New York’s grid, about 70% of which relies on gas.

Then there is the activist-driven closure of the Indian Point Nuclear Power Plant, which provides nearly a quarter of New York City’s power now, without any replacement for its output. Then add in the looming deadlines to implement the Climate Leadership and Community Protection Act (CLCPA), an aggressive carbon emissions plan so short on implementation details that even the governor has admitted it may not be achievable, and the risk to New York’s energy reliability becomes clear.

To date, the committee working groups to develop the CLCPA have yet to be staffed and little progress has been made with one year left to submit an implementation plan. The legislation requires New York to develop a plan to reduce total carbon emissions by 40% of 1990 levels by 2030 and 85% by 2050. It also mandates that New York generate 70% of its power from renewable energy resources.

In 2018, roughly 27% of that came from renewables, most of it from hydropower generation. What many opponents of natural gas pipelines fail to acknowledge is the role it plays in providing back-up power generation that helps expand the deployment of renewable resources to empower the clean energy future the public wants.

The damage to New Jersey from the pandemic has been fearsome and sustained. The Garden State’s unemployment rate rose to 16.6%, the second highest in the nation, in June, sharing neighboring New York’s trend-bucking increase from the April peak. It got so bad that the NJ Department of Labor and Workforce Development said “it had never before processed as many claims in such a short period.” That’s in a state where 9% of the population was already living in poverty, while the elderly and fixed-income families accounted for 16% of the populace.

No one in New Jersey has it easy when it comes to energy costs, either. Residential electricity prices are 19% above the national average, and are 12th most expensive in the country, according to federal data. And bear in mind, U.S. Energy Information Administration data has shown that more than a fifth of the roughly 118 million households in the U.S. have had to forgo food or medicine to pay their energy bills.

“We can’t ask people, residential or business customers, [suffering from impacts of the COVID-19] to pay more for an essential service like electricity right now, unless it’s absolutely necessary,” a representative of New Jersey’s Division of the Rate Counsel – the state body responsible for protecting consumers from high energy costs – said at a recent webinar.

New Jersey is one of the most expensive real estate markets in the country and has some of the nation’s highest property taxes; almost three-quarters of the homes in the state are heated by natural gas. Any change to their energy access would likely increase the already-daunting financial burden on homeowners. Over 90% of the state’s electricity comes from nuclear power and gas.

Unfortunately, legislators, regulators, and policymakers in New Jersey have repeatedly pushed forward mandates and directives against pipelines and natural gas use that have made energy more expensive and less reliable. For example, the Governor’s Energy Master Plan envisioned a 100% carbon-free energy mandate that is estimated to cost $115 billion – or nearly $40,000 for every household in the state. At the same time, the State of New Jersey blocked or impeded billions of dollars in economic activity that pipelines could provide, which would cut energy bills by hundreds of millions of dollars for New Jersey consumers and reduce emissions.

This kind of activist-led policymaking appeals to a narrow interest – most led by out-of-state groups – at the expense of the overall economic health of New Jersey. These are easy decisions to make now in a bid for re-election, but these leaders will not have to face voters when the true financial impacts become clear a few years later.

As in neighboring states, the pandemic wreaked havoc on the slow but steady revival occurring in Pennsylvania. More than 2 million people have filed for unemployment, and in April, the unemployment rate topped 15%. Although unemployment eased to 12.5% in June, it is still the ninth highest rate in the country.

Fortunately, the state’s regulatory climate is favorable and policymakers largely view Pennsylvania’s incredible energy resources as an asset to its economy. Because of this, they’ve supported policies that have reinvigorated communities that previously suffered from the loss of manufacturing and industry during Pennsylvania’s earlier economic heydays. However, municipalities in Pennsylvania are being pushed to ban the use of natural gas and traditional fuels by small, shrill groups who are often supported by large national organizations.

Activists are ramping up opposition against pipelines and large infrastructure projects like the planned ethylene cracker facility in Western Pennsylvania, which would create the ingredients used in a myriad of consumer products, but is especially critical now for the production of PPE. It would be the single largest source of private investment in the state since World War II, and before the start of COVID, the project had over 8,000 workers on site before it had to shut down.

The petrochemical sector has also sparked over $300 billion in new U.S. investment, with nearly 70% of that economic growth coming back to the U.S. from overseas markets primarily because of America’s abundant and affordable energy supply and pipeline infrastructure.

Yet, despite this proven economic growth due to energy development, states like New York and New Jersey have actively used their permitting processes to stop pipeline infrastructure originating in Pennsylvania. This type of policymaking in neighboring states has led to higher energy costs and lost savings for families, seniors and small businesses – especially in eastern Pennsylvania – and denied the state thousands of new jobs and millions in local tax revenue that would help alleviate the current economic pain being felt across so many communities.

To read the full report, click here, and check out the details on three critical pipelines — the NESE, PennEast and the Northern Access — all of which have been held captive to green special interest politics, green virtue signaling by spineless craven politicians and big money from hedge-fund green eggs scammers who fund the radical shills undermining the projects. Pipelines delayed are lives delayed.