[Editor’s Note: The PJM grid is at great risk. It is threatened by the green virtue signaling of politicians such as Pennsylvania’s Tom Wolf.]

With Green New Dealers running Washington, D.C., and Gov. Tom Wolf pushing so-called green energy from Harrisburg, questions must be asked about the development of Pennsylvania’s electric transmission system and the impact on the PJM grid. 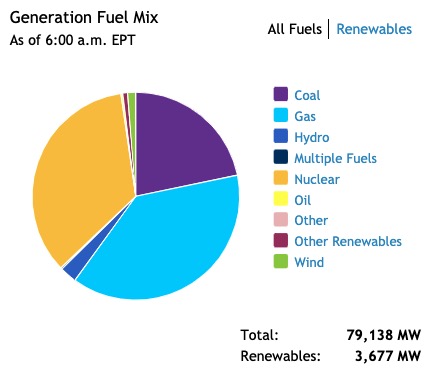 Power interruptions over the past year in Texas and California were at least partly attributed to the misdirection of resources to green energy projects at the expense of more reliable traditional sources and maintenance. A Texas cold snap triggered a spectacular failure of wind and solar electric generation leading to costly and deadly power outages in February. Last summer, heat waves and green-energy failures resulted in extended blackouts in California.

So what about Pennsylvania? The state’s  transmission system is operated by the PJM Interconnection as part of a grid covering all or parts of 13 states and the District of Columbia — largely the Mid-Atlantic and extending into some Midwestern states. Based at Valley Forge, the member-owned grid serves 65 million people, constitutes the largest grid in North America and manages the largest energy market in the world.

In a paper entitled “Reliability in PJM: Today and Tomorrow” and published March 11, 2021, the organization says:

Historically, adequate system capacity has resulted in adequate energy, as most traditional generation is capable of running 24 hours a day. As the level of renewables and storage rises, however, ensuring adequate energy across all hours of the day will be an increasingly important consideration, because the available output of those resources can vary significantly throughout the day.

Resource output can vary with the energy source (in the case of wind and solar), or may be limited in the number of run hours at full output (in the case of storage). In addition, the rise of solar generation on the PJM system will change the hours most at risk of load shed.

Historically, this has been the hours of peak demand in the summer, when temperatures are at their highest. In a system with a high penetration of solar, those hours of risk shift to later in the evening, when the sun is setting and solar performance is decreasing while temperatures remain high. This has been observed in California, which has a much higher penetration level of solar than PJM at this time. The California ISO (Independent System Operator), in their report on the August 2020 rotating outages, pointed to the shifting risk from gross- to net-peak demand as a key contributor, and an area that requires further attention in the future.

In other words, the addition of wind and solar technologies and battery storage to the interconnection threatens grid reliability. Wind and solar are inherently unreliable, intermittent generators of electricity requiring backup with more dependable sources such as fossil-fueled and nuclear-powered plants. Batteries are seriously limited in how long they can provide power.

PJM says it is undertaking a review of grid reliability that would include participation by policymakers and stakeholders.

PJM already has introduced wind and solar to the grid, some would argue, on the basis of a specious premise that carbon dioxide emissions are a threat. Add their inherent inefficiencies, deleterious effect on grid reliability and cost to consumers, and reasonable people could conclude that wind and solar often do more harm than good.

Despite the negatives, there is pressure from misinformed or agenda-driven political leaders and interest groups to continue to subsidize these so-called green technologies. There also is the profit motive of electric utilities who make a return on assets that are added to their portfolios.

As PJM undertakes its analysis of grid reliability these questions arise:

Yet another question is how much will be spent on new transmission lines and backup power sources to accommodate the locations of new wind and solar facilities and to compensate for their notorious intermittency? In Texas, where neither wind nor solar were available at the most critical time last winter, such investments ran into the billions.

Note: Gordon Tomb is a senior fellow with the Commonwealth Foundation, a Pennsylvania free-market think tank.