[Editor’s Note: Prohibition and the tyranny of extremist minorities who demand others submit to rules we just experienced and they won’t follow is back with gas stove bans.]

Do you remember studying Prohibition in grade school? In the United States, from 1920 to 1933, a nationwide constitutional law prohibited the production, importation, transportation, and sale of alcoholic beverages. A bunch of ninny nannies thought they knew better than everyone else whether or not anyone should consume adult beverages. The ninny nannies eventually got enough politicians to vote in favor of the 18th Amendment to the Constitution. The 21st Amendment, passed some 13 years later, repealed the 18th Amendment.

A modern-day version of the same thing is now happening, with cities (and some states, like New York) attempting to ban natural gas stoves, based on false claims that gas stoves are a health hazard. Just like alcohol was a health hazard 100 years ago? 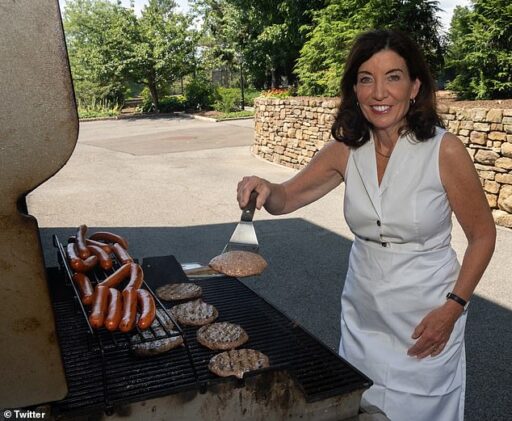 The Biden administration, facing public backlash, has dropped plans to consider banning gas stoves, but that hasn’t slowed down Democratic-leaning states, cities and towns that are moving to force residents and businesses to switch to all-electric appliances.

A mandate to go all-electric is a bold gambit in the war to eliminate fossil fuels because it would increase demand on a power grid that relies heavily on fossil fuels.

Montgomery County, Maryland, just outside Washington, was among the latest jurisdictions to ban natural gas for heat and appliances in new residential and commercial buildings. The County Council voted in December to require new construction to use only electric energy by the end of 2026. The D.C. Council voted to impose a similar ban on natural gas earlier last year.

New York Gov. Kathy Hochul, a Democrat, announced this month one of the most aggressive statewide proposals of its kind: the elimination of natural gas hookups in new construction starting in 2025. The plan, which she said is necessary to fight climate change, would end the sale of all fossil-fuel-powered heating equipment across the state by 2030. 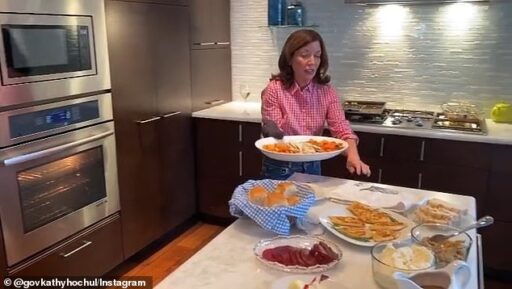 Dozens of jurisdictions in California, including Berkley, San Francisco and San Jose, have banned natural gas appliances and heating. In Los Angeles, the Department of Building and Safety recommended in October that the city require new construction to use only electric energy.

The American Gas Association said roughly 85 localities across the country have adopted some prohibition on the use of natural gas.

“It’s obviously spreading, like a virus,” Rachael Wilfong, a researcher at the Center for Energy, Climate and Environment at the conservative Heritage Foundation, told The Washington Times…

Climate change activists, who are lobbying for states and the federal government to ban fossil fuels, want complete electrification of cities and towns. They say it would help end fossil fuel use as more solar and wind power is worked into the nation’s energy grid…

Advocates of fossil fuel point out that electrical grids rely mostly on coal, natural gas and nuclear power and derive only a small portion from renewable energy such as wind and solar. That means switching to electric stoves isn’t really producing green energy.

In New York state, renewables, mostly hydroelectric plants, powered 22% of the energy grid in 2020, according to the EIA. Wind and solar made up less than 2%.

“Even if you believe in the climate science, there is no way replacing gas stoves with electric is going to make a difference,” Steve Milloy, a senior fellow at the Energy and Environment Legal Institute, a fossil fuel advocacy group, told The Times…

As [Kathy Hochul] was pitching a statewide fossil fuel ban, the Biden administration was rushing to assure the public that the federal government did not support a plan to ban gas stoves.

Biden officials were backtracking on a statement from Richard Trumka Jr., a member of the Consumer Product Safety Commission, who said the panel would consider banning gas stoves because a study showed that they can cause asthma and are harmful to the environment.

“Products that can’t be made safe can be banned,” Mr. Trumka told Bloomberg News.

Mr. Trumka cited a study released this month that said gas stoves pollute the air and cause more than 12% of all childhood asthma.

The figure was derived from an analysis of past studies, including one that tested gas stove emissions after sealing a room with plastic wrap to eliminate all ventilation. The report was co-authored by the Rocky Mountain Institute, which seeks to cut greenhouse gas emissions by at least 50% by 2030…

Mr. Trumka’s threat to ban gas stoves created immediate backlash and ridicule of the Biden administration. An estimated 40% of all U.S. stoves are powered by gas, and many Americans prefer that method to cook their food.

“This is a recipe for disaster,” Sen. Joe Manchin III, West Virginia Democrat, said in a Twitter post. “The federal government has no business telling American families how to cook their dinner. I can tell you the last thing that would ever leave my house is the gas stove that we cook on.”

The creeping ban on natural gas is facing opposition. Florida and 19 other states, most with Republican-controlled legislatures, have passed bills prohibiting local governments from restricting natural gas use.

Prohibition (from 100 years ago) got its start when a small group of people began to pressure cities and municipalities not to wait for the federal government to act, but to move forward with their own bans. The same thing is happening with Democrat-led cities today with the New Prohibition as Fox News reports:

Democratic leaders in major cities nationwide have already moved forward with bans on natural gas stoves even as the Biden administration has pumped the brakes on similar regulations at the federal level.

Leaders of the Democrat-led cities have argued that transitioning away from natural gas would help achieve climate and net-zero ambitions.

“New York City is proof that it’s possible to end the era of fossil fuels, invest in a sustainable future, protect public health and create good-paying jobs in the process,” former New York City Mayor Bill de Blasio said in December 2021. “If the largest city in America can take this critical step to ban gas use, any city can do the same.”

Following his remarks, de Blasio signed a law requiring the phase-out of fossil fuel usage in new buildings. The law, which goes into effect this year and mandates new buildings are fully electric by 2027, made New York City the largest city and first large cold-weather city to phase out fossil fuel combustion in new construction.

The New York law came months after Seattle’s city council had already unanimously approved a ban on gas appliances in new construction, which passed in June 2021…

“Any efforts to ban highly efficient natural gas stoves should raise alarm bells for the 187 million Americans who depend on this essential fuel every day,” the American Gas Association said Jan. 10 in a statement. “Natural gas utilities have reduced their greenhouse gas emissions by 69% since 1990 and help homeowners reduce their carbon emissions 1.2% every year.

“The use of natural gas has reduced power sector emissions to 40-year lows and, as an essential backup fuel, has enabled the growth of renewables.”

We’ve already debunked the lies of the study cited as the basis for banning gas stoves. In fact, the lead author of the study has admitted there is no link between gas stoves and asthma in children, which is the false claim these cities are using (see Author of Sham “Study” on Gas Stoves Admits No Link to Asthma). Not to mention the “study” was actually just a literature review of other studies, cherry-picked to omit studies that contradicted the findings put forward by the authors. In other words, it wasn’t even real research.

Here’s yet another striking similarity between the old Prohibition and the New Prohibition: The people pushing the New Prohibition refuse to follow their own demands. People still drank illegal beer or wine 100 years ago, even as they publicly promoted abstinence. It’s the same today. One of the biggest hypocrites is New York Gov. Kathy Hochul. She wants to ban all gas stoves throughout the state—yet she uses them herself!

The pushback is targeting Hochul’s personal use of fossil fuels on gas ranges at the Executive Mansion in Albany and at her private pad in Buffalo.

“The governor’s push to ban gas stoves appears to be as hypocritical as it is ridiculous,” Assembly Minority Leader William Barclay (R-Fulton) fumed.

“One has to wonder how many times she’s fired up her own gas stove since declaring them environmentally unsafe in her State of the State Address,” he added.

In two years, new smaller buildings will no longer be allowed to have gas hook-ups under the proposal unveiled by Hochul earlier this month — with the ban extending to larger buildings under construction by 2028.

Hochul has argued the state must push electrification mandates for new buildings in order to implement plans to reduce the state’s greenhouse gas emissions by 85% compared with 1990 levels as required by a 2019 state law championed by Albany Democrats.

Upstate Republican Rep. Nick Langworthy said, “Is it any surprise that Queen Kathy cooks on her gas stove when she flies around on private planes? New Yorkers are so sick of phony climate-warrior hypocrites and their ‘rules for thee but not for me.’ Our state is in a crime and economic free fall and she’s waging war on appliances.”

“Flying in private jets and driving gas-guzzling SUVs are common sights as they fear-monger and frighten our children over climate change,” state Sen. George Borello (R-Jamestown) told The Post.

“If eliminating natural gas appliances and heating isn’t a priority for the political elite then why should it be for middle-class families in New York,” he asked.

Assemblyman Jarett Gandolfo (R-Suffolk) noted how Hochul, the highest paid governor in the country, could accumulate more political capital for her environmental agenda by first going green at her own residences.

“The governor, and anyone else in government support a ban on fossil fuel powered equipment, should lead by example. I’d like to see them remove their gas stoves and heating systems,” the GOP legislator charged. When questioned, Hochul spokeswoman Hazel Crampton-Hays didn’t tell The Post if the governor still has gas stoves at either residence.

“No one is taking away anyone’s gas stoves,” Crampton-Hays said about the proposal Hochul aims to get approved in the state budget due April 1.

“The Governor’s proposal would not apply to existing gas stoves in homes and businesses. We are focused on continuing to advance the boldest climate policies in the nation to protect the health and safety of our children and the planet, all while lowering energy bills and prioritizing energy affordability and reliability,” Crampton-Hays added.

Resistance to Hochul’s proposal is part of a wider backlash against gas stoves that was sparked weeks ago amid talk about a federal ban by the Consumer Product Safety Commission — and later walked back by the Biden administration.

Restauranteurs have expressed concern about getting exemptions to any future restrictions on gas stoves, arguing that cooking by flame offers advantages over electric heat.

Gas also offers a level of reliability that’s hard to rival, according to Melissa Fleischut, president and CEO of the New York State Restaurant Association.

“The recent storms in Western New York are a perfect example, as many people hit by widespread power outages were able to have warm meals thanks to gas stoves in homes and restaurants,” she said.

Hochul is expected to unveil her proposed state budget by the end of January; it’ll detail how she wants to implement her building electrification mandates and the types of exceptions that might be included.

If Hochul is looking for skeptics to warm up to the idea in upcoming months, she might want to consider doing what she says in her speeches — and not what she does in her own life, according to Borello.

“Perhaps the governor and other Democrats should traverse the state in Chevy Volts instead of Chevy suburbans,” Borello said.