[Editor’s Note: Climate reparations is nonsense—nothing more than another grifting opportunity for everyone involved—but will it be the reach too far by the corporatist NGOs?]

The extreme rhetoric of “loss and damage reparations” could backfire, causing developed countries to question the developing country claims of human caused damage. The best defense against a ruinous liability claim is innocence.

Until now the alarmist governments of America and the other developed countries have gleefully touted the emergency threat of human caused climate change, because it gave them immense power. They happily boasted of transforming our society and transitioning our energy system, all to save us from the ever increasing greenhouse gasses.

Central to this alarmist narrative is the theme that the world is already suffering heavily from human caused climate change. Every weather disaster is now called a “climate event” or some silly such.

Well as we say in the mountains: “What goes around, comes around.” 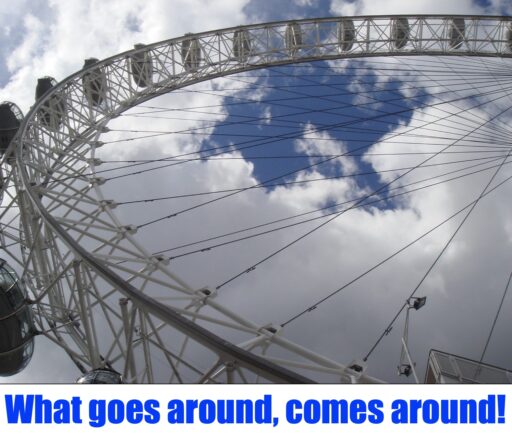 The climate damage narrative has now come to bite the developed countries, and bite them really hard. In principle, ruinously hard.

The logic of loss and damage is impeccable. If you accept the human caused destruction narrative then the developed countries are clearly responsible for most of the damage. In addition to damaging themselves they are damaging the developing countries who have had little to do with the 150 year run up in greenhouse gasses.

Reparations has now become the theme of the COP. Most news stories feature that nasty word. How this will play out in the actual, possibly ruined, negotiations is anybody’s guess.

The technical issues of possible responsibility under the doctrine of human caused “climate chaos”(as the alarmists now call it) are formidable. They are both hairy and fuzzy. There is no claim to attribute a given extreme event to specific emissions. Attribution is done by comparing a model run which includes the (supposed) totality of human forcing to one without that forcing. The difference is due to us, but only in a very general way.

Note that the extreme event does not actually appear in this modeling because they are too small and brief. So the so-called attribution scientists look for broader differences that might be linked to the event. They also ignore that different models give very different regional change results, plus they differ on human forcing.

And in any event the finding is just a change in probability of the event in question. How that change translates to responsibility is unclear. If we made a storm 20% more likely does that mean we owe 20% of the damages, or what? I doubt there is a rational answer to this silly question.

Thus the science of attribution is shaky (and hairy), which might be a defense against liability, but that supposed science does exist. An lengthy introduction to the science, written by alarmists that believe in it, is here.

National responsibility would then be a matter of how much that country contributed to the total forcing. Another hairy and fuzzy question.

Since I do not believe the doctrine of destructive human caused climate chaos, this whole reparations drill has the aspect of Theatre of the Absurd. The governments of the world debating about something that does not exist and who should pay for it!

On the other hand, this wacky reparations nonsense could lead to serious questioning of AGW. Let’s hope so. After all the best defense to a claim of liability is innocence. We are not causing climate damage. No harm, no foul. The skeptics have volumes of evidence to this effect, which governments might finally find useful.

But the hairy, fuzzy issues of attribution and liability are well off in the future. For now the COP issue is whether or not to create a formal facility to handle the hoped for (and demanded) financial flows.

Given all the nasty words heaped on America et al, it will be very interesting to see how the professional diplomats handle this mess, if they can. There is a lot of COP27 to go.