A new report from the Breakthrough Institute examines future oil and natural gas demand through the lens of four decarbonization scenarios and the possible impacts climate policies and international politics might have on the industry. While the report emphasizes infrastructure deficiencies and the need for economic diversification in these future climate scenarios, it also makes several interesting points about the consistent need for oil and natural gas, and how even in the most stringent emission reduction plans, U.S. natural gas can help lead the global energy transition.

Conclusion #1: Continued Investment In Oil and Natural Gas Will Be Necessary to Meet Projected Energy Demand

Via the Breakthrough Institute:

“Despite potentially significant declines in global oil and gas demand across the climate scenarios by 2050, our findings clearly indicate that investment in new oil and gas fields may still be necessary to meet future demand for oil and gas in all three of the climate change mitigation scenarios.” (emphasis added)

Even when analyzing the most demanding of potential global climate scenarios, the report finds that new oil and natural gas development will still be needed “as currently operating fields will be inadequate to meet future global demand.”

The report forecasts that approximately 10 million barrels per day (b/d) of oil production from new fields is needed between 2030 and 2050 in order to meet global oil demand, even in the International Energy Agency Sustainable Development Scenario (SDS), the most ambitious climate scenario considered.

Sustained demand for oil is driven by economic competition and supply chain activities that are essential to modern standards of life.

“Petroleum products such as diesel and gasoline are the fuels that keep the cargo ships, aircraft, and trucks that underlie supply chains operating smoothly…”

These findings show that even in a world on a path to less than 2°C of warming, the global oil and natural gas industry is still needed to meet energy demand and keep the world moving:

Conclusion #2: U.S. Natural Gas Remains Highly Necessary and Most Affordable In the World

The data found in Breakthrough’s report also show that even in the most ambitious climate scenarios, U.S. natural gas remains a critical piece of the energy puzzle:

“Even in the restrictive SDS, greenfield natural gas production in the United States in 2050 is projected to amount to 80 percent of current U.S. production.”

This is largely due to the many benefits of natural gas, including how it has been a critical source to lowering emissions over the past decade; how it works symbiotically with renewables like wind and solar to complement intermittency gaps; and its flexibility in broad range of uses:

“…Gas demand is more resilient than oil demand in climate change mitigation scenarios due to its lower carbon intensity and broader range of applications such as in electricity, industrial processes, and heat production.”

The report also finds that the United States has the most affordable natural gas in the world on average, due to the large volume of supply found in resource-rich basins in states like Texas. New Mexico, Pennsylvania, Ohio, and West Virginia. 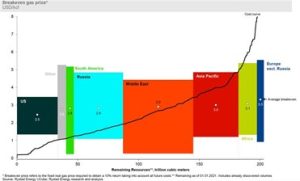 Additionally, the report argues that the United States is poised to become a global leader in natural gas, and specifically in the liquefied natural gas (LNG) space, if proper infrastructure and policies are put in place:

“The cost-competitiveness of US gas production and the expanding global liquefied natural gas (LNG) market make it likely that the United States remains a dominant global gas producer… Expanding LNG infrastructure has the potential to improve the energy security of America’s European allies, while also being compatible with aggressive climate change mitigation trajectories.”

Conclusion #3: U.S. Oil Is the Cleanest in the World

The Breakthrough Institute’s analysis shows that U.S. oil is the cleanest in the world with a comparatively low carbon footprint:

“Our field-level economic analysis demonstrates that US oil and gas production is relatively low carbon and, therefore, would be minimally impacted by carbon pricing in absolute terms relative to production in other regions. […]  In particular, US oil is the “cleanest” on average in the world.” (emphasis added) 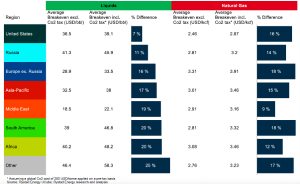 Additionally, the report points out that domestic oil and natural gas production is an important part of ensuring energy security both domestically and for American allies, while simultaneously making progress towards emission reduction goals:

“To reduce the marginal emissions of oil and gas production, while ensuring security of supply for the United States and its allies, policy makers should avoid penalizing or preventing US production exclusively.” (emphasis added)

Bottom Line: While this report analyzes long-term transformations of energy systems, the data clearly shows that oil and natural gas – and in particular, U.S. natural gas – will remain an essential component of the energy mix, even in the most ambitious of future climate scenarios. Politics and policies that seek to decimate the energy industry and its many tangential products and benefits are ignoring a basic and important truth: the United States and the world needs oil and natural gas, and when produced domestically rather than abroad, it can be both cleaner and more affordable.

The post Report: Even In Most Demanding Future Decarbonization Scenarios, World Needs U.S. Oil and Natural Gas appeared first on .