Republican Senators Plot Their Own Destruction and Ours

Republican Senators Plot Their Own Destruction and Ours

[Editor’s Note: The Joe Biden puppeteers and Chinese controllers are clearly aiming to undo American energy independence and, once again, make us dependent on foreign energy.]

Despite the fact that inflation is the highest it’s been in forty years and the U.S. economy contracted in the first quarter of 2022, Republican Senators Kevin Cramer, Lindsey Graham, and Bill Cassidy apparently think so.  They’re plotting with Democrat Senators Joe Manchin, Chris Coons, and Sheldon Whitehouse (who’s never met an energy tax he didn’t like) to push for a new “carbon border adjustment.” 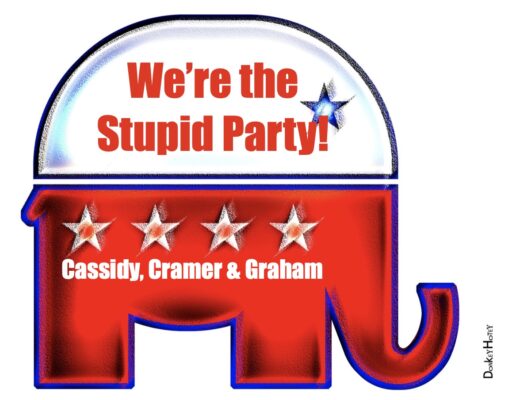 That’s bad news for household budgets.  This so-called “adjustment” is a tax on energy – like oil, gas, and coal – and imports, like fertilizer, steel, aluminum, and concrete.  It will drive up the cost of pretty much everything made or transported, including household goods, cars, and food.

The theory behind this tax is that we should make countries like China and India put strict limits on their emissions.  The reality is, people in the U.S. are going to pay in the end.

Senator Cramer’s argument for the new energy tax might be the most bizarre of all.  Here’s what he told E&E News:  “To me, one of the bigger challenges is that Europe is so far out in front on the whole concept.  And it’s hard to tell them to slow down, but at the same time, I’d like to reconcile with them first, and then I think we all move forward better.”

Has Senator Cramer looked at Europe’s energy situation recently?  Half the continent is hoping Russia doesn’t cut off its oil and gas after years patting themselves on the back for switching to wind and solar.  Following a Europe First strategy is the worst possible approach for America.

A better strategy would be to liberate American industry from the jumble of regulations and restrictions that drive up costs here at home.  Increased energy production at home is a win for the economy and the environment.

They can call it what they want, but the carbon border adjustment is still a tax on energy.  It will eat into the wallets of all Americans, especially the poor, the elderly, and local institutions like schools and hospitals.

Furthermore, knowing the history of Senator Whitehouse and Senator Coons, is there any chance they’ll stop there?  Absolutely not.  This plan is phase one for the Democrats in their larger agenda of appeasing Big Green, Inc.  Anyone who thinks this is about helping the U.S. economy or American consumers is deluded.

We know the Democrats’ end goal is to stop every one of us from using affordable oil, gas, and coal. They don’t care where it comes from and they don’t care about pushing us into energy poverty like the Europeans are now facing.  We expect better from Senators Cramer, Cassidy, and Graham.

When President Carter presided over the destruction of our economy in the 1970s he tried to blame stagflation on the Arab oil embargo.  Similarly, President Biden is trying to blame Putin for his runaway inflation.

If these Republican Senators help impose an energy tax on top of the mess we are already in, they will have no one to blame but themselves.

[Editor’s Note: :Politicians repeatedly prove you can’t trust anyone once they go to Washington. Cassidy and Cramer come from oil and gas states. What are they thinking in trying to work with Chris Coons and Sheldon Whitehouse who are oil and gas haters? This, in a nutshell, shows precisely why Americans are so frustrated with the ruling class, why disruptors are so important and why establishment politics is destroying us. Trust is the essential foundation of a free society and there is less and less to be had.