[Editor’s Note: REV LNG takes gas produced in PA, liquifies it, trucks it through NY and crosses into Canada to supply a ship moving cargo to Detroit.]

Hamilton, ON – Yesterday, for the first time ever on the Great Lakes, a marine vessel refueled with liquefied natural gas (LNG). Carrying a load of asphalt, the MV Damia Desgagnés docked at the Port of Hamilton’s Pier 22 to refuel before departing for Detroit. As a result of a new partnership between the Hamilton-Oshawa Port Authority and REV LNG, marine vessels will now be able to refuel with liquefied natural gas during any stopover at Hamilton Port. This is a major milestone in the energy evolution of the Great Lakes marine shipping industry, which is looking for new ways to reduce GHGs and advance environmental goals. 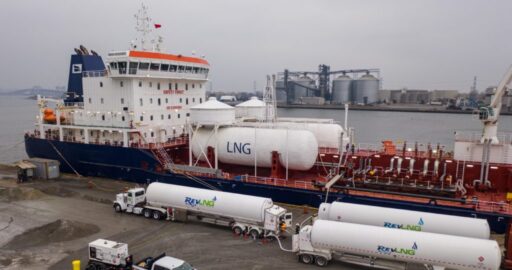 “As a founding member of the Green Marine program, we are always looking for new ways to support improved environmental performance. This offering to our shipping customers will keep HOPA at the forefront,” said Hamilton-Oshawa Port Authority CEO Ian Hamilton. “We look forward to continuing to find new ways to support improving air quality, reducing GHGs, and working collaboratively with Canadian and U.S. marine and energy sector partners to help accelerate the adoption of LNG, and spur further fuel innovations. It also aligns with HOPA’s goal to be carbon neutral by 2025.”

LNG is a cleaner alternative to conventional oil-based bunker fuel, which can achieve GHG reductions in the entire well-to-wake lifecycle by up to 21 per cent [Life Cycle GHG Emission Study on the Use of LNG as Marine Fuel, Sphera for SEA-LNG 2019]. It also improves air quality by eliminating 100 per cent of sulfur (SOX), 90 per cent of NOX and all particulate matter.

REV LNG, a Pennsylvania-based liquefied natural gas services provider, presided over the commercial and technical development of the project, LNG transportation and all shore-side operations. “We expect this will signal the beginning of LNG bunkering in a key marine market, and REV’s special coordination and attention to safety will keep customers coming back,” said Dave Kailbourne, CEO of REV LNG.

Pivotal LNG, a leading provider of LNG marine fuel In the U.S., supported the project with its expertise and LNG supply from the recently operational Towanda Liquefaction and Storage Facility, located in Bradford County, Pennsylvania. The facility is owned and operated by an affiliate of Pivotal LNG in partnership with REV LNG. “We couldn’t be happier to see that the brand-new facility in Towanda is already proving its value in the region,” said Roger Williams, Vice-President of Commercial LNG and Gas Development at BHE GT&S, the parent company of Pivotal LNG. “LNG holds great promise for supporting the emissions reduction goals of the shipping industry and with Towanda’s proximity to the Great Lakes, we look forward to being part of that cleaner energy future.”

In 2020, the International Maritime Organization (IMO) set out new targets for marine fleets to cut GHG emissions (or carbon intensity per ton of cargo moved) by 40 per cent by 2030, and by 70 per cent by 2050. Shipping is a backbone of the global economy, and 90 per cent of world trade travels via ship on waterways across the globe.

The Great Lakes – St. Lawrence Seaway system is an important part of this international network. Although LNG supply chains are still relatively new in the Great Lakes, demand for LNG is growing as shipowners work to meet or exceed national climate targets for GHG reduction and improved air quality, in addition to those set by the IMO. Based in Quebec City, Desgagnés has been one of the early Canadian adopters, investing heavily in R&D and innovation across its fleet to reduce emissions.

“Our LNG fueled fleet has now expanded to five Canadian flagged tankers all operating in the Great Lakes, St. Lawrence Seaway system, Eastern Canada and U.S. as well as the Canadian Arctic,” said Jacques Beauchamp, President, Petro-Nav Inc. (a subsidiary of Desgagnés). “We are proud to be leaders in energy efficient, low emission, low carbon marine transportation. We are especially excited to participate with the Port of Hamilton and Rev LNG in this first marine LNG bunkering location in the Great lakes.”

Currently, the only LNG capacity at ports in Canada exists along the west coast in BC and the St Lawrence River in Montreal and Quebec City. LNG is recognized as an immediately viable and cost-effective alternative, or transition fuel, alongside longer-term technologies like electrification, biofuels and other renewables. “As the most carbon efficient mode of transport, marine shipping has an important part to play in the battle against climate change,” says Bruce Burrows, President and CEO of the Chamber of Marine Commerce. “Canadian ship operators have spent more than $2 billion in recent years on new ships as well as adopting technologies and alternative fuels to decrease their environmental footprint further. LNG is part of the mix of solutions and having an expanded supply network will be key to its further adoption.”