[Editor’s Note: Tom Wolf has crafted his RGGI carbon tax upon a foundation of lies about the cost of carbon credits to consumers and two Senators are calling him on it.]

Two Pennsylvania Senators, Gene Yaw (Lycoming County) and John Yudichak (Luzerne County) have sent a letter to the state’s Independent Fiscal Office (IFO) asking the IFO to audit the modeling done by the inept Dept. of Environmental Protection (DEP) with respect to the price of credits being sold under the RGGI carbon tax scheme.

Pennsylvania Gov. Wolf intends to force the state, against the will of the people (i.e. the legislature that represents the people) to join RGGI, which slaps in insanely high carbon tax on all coal- and Marcellus gas-fired power plants. Yaw and Yudichak believe the DEP fudged the numbers with their original estimates of how much so-called RGGI credits cost. The senators want a neutral, independent third party to analyze the analysis done by the DEP.

Wolf’s carbon tax scheme will devastate the Marcellus industry in the state. RGGI (the Regional Greenhouse Gas Initiative), forces electric power plants to buy credits to offset the carbon dioxide they emit into the air. By the way, carbon dioxide (CO2) is what you exhale with every breathe you take. All animals inhale oxygen and exhale CO2.

Somehow climate cultists have relabeled CO2 as “pollution” and claim, falsely, that too much CO2 is toasting Mom Earth. They offer no evidence other than pointing to the latest hurricane or forest fire and claiming, without any evidence whatsoever, that “global warming caused it.” We offer empirical evidence that global warming is not happening (see Happy Earth Day! MDN Debunks Global Warming Using Actual Temp Data).

At any rate, in 2019 when the DEP offered up its analysis of how much so-called RGGI credits would cost, it was in the range of $4 per credit maximum (each credit is for one “short ton” of CO2 emitted). Other states already participate in this RGGI madness–namely New York, New Jersey, and New England. The most recent auction for RGGI credits saw prices per credit average over $13 per credit! In other words, DEP’s estimates were way off base. 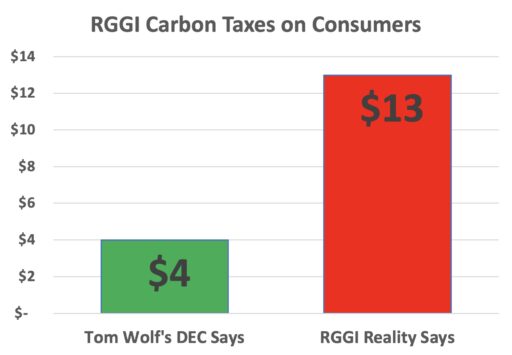 Yaw and Yudichak want an honest estimate how just how high RGGI credit costs will go:

“The IFO’s impartial analysis has been regarded as among the most trustworthy perspectives in state government for more than a decade,” Yaw said. “The office’s projections will offer clarity on RGGI’s true economic impacts, given the Wolf administration’s repeated unwillingness to do so.”

The senators requested an IFO review after the Department of Environmental Protection refused an invitation to testify before the before the Senate Environmental Resources and Energy Committee, of which Yaw is chairman, about skyrocketing RGGI costs not contemplated by prior modeling.

Yudichak, as chairman of the Senate Community, Economic and Recreational Development Committee, is planning to host a joint hearing with Yaw’s ERE Committee next month to discuss the IFO’s findings.

“Pennsylvania taxpayers, consumers and businesses deserve honest, accurate information about the proposed RGGI program and how it will impact their everyday lives,” said Yudichak. “The plan is expected to substantially increase utility bills for every small business and homeowner in Pennsylvania.”

When Gov. Tom Wolf signed the 2019 executive order that forced Pennsylvania into the regional carbon tax program, auction clearing prices – the amount energy producers pay to buy “credits” to offset their emissions – were $3.24 per short ton. At that time, taxpayer-funded analysts insisted prices would stay under $4 through 2030.

The most recent auction clearing price set on Dec. 1, however, exceeded $13 per short ton, more than four times what the department estimated and 40% above the Sept. 8 clearing price alone. Inflationary pressures show no sign of slowing down anytime soon, either, meaning prices will continue to climb.

“This de facto carbon tax will translate into electricity bills spiking by double digits, ballooning fuel costs and price increases on just about everything we use daily,” Yaw said. “Thousands of jobs will disappear. And zero carbon emissions will be removed from the atmosphere. Taxpayers deserve to know the true cost of Wolf administration’s out-of-touch policies.”

Here’s a copy of the letter sent by Yaw and Yudichak to the IFO:

Sen. Yaw’s comment about Wolf’s “out-of-touch policies” triggered a memory of Daryl Hall & John Oates’ iconic song, “Out of Touch,” from the 1980s. Crank up the volume and enjoy! (Get a load of the leopard skin and zebra designs. Ick.)