RGGI Isn’t Going to Do Anything for You Pennsylvanians. Wake Up!

[Editor’s Note: Roger updates his take on Tom Wolf’s obsessive desire to impose RGGI on Pennsylvanians and says the benefits assumed are faulty.]

Because I have a long-standing interest in the Regional Greenhouse Gas Initiative (RGGI), I checked out a Pennsylvania Department of Environmental Protection (DEP) webinar held on August 6, 2020.  I prepared a post describing my impression of the presentation against the reality of my experience with RGGI that caught the attention of Daryl Metcalfe, the Chair of the Pennsylvania House of Representatives Environmental Resources & Energy Committee who asked me to provide testimony at the August 25, 2020 committee meeting regarding RGGI as described here.  Sadly, the plan to join RGGI is still alive.  This post looks at a couple of the most recent claims made by DEP for projected emission reductions. Thanks to a friend for alerting me to the inconsistencies.

I have been involved in the RGGI program process since it was first proposed prior to 2008.  I blog about the details of the RGGI program because very few seem to want to provide any criticisms of the program. I have extensive experience with air pollution control theory and implementation having worked on every cap and trade program affecting electric generating facilities in New York including the Acid Rain Program, Regional Greenhouse Gas Initiative (RGGI) and several Nitrogen Oxide programs.  Note that my experience is exclusively on the industry side and the difference in perspective between affected sources trying to comply with the rules and economists opining about what they should be doing have important ramifications. The opinions expressed in this post do not reflect the position of any of my previous employers or any other company I have been associated with, these comments are mine alone.

The Pennsylvania Citizens Advisory Council reviews all environmental regulations and makes recommendations.  At the May 19, 2021 the Council addressed the proposed regulation implementing RGGI.  Slide 10 (shown below) of the presentation reports the proposed cap levels for Pennsylvania’s participation in RGGI. The RGGI annual reductions summed from 2022 to 2030 total 19,914,960 tons.  The “massive” 188 million ton reduction is over a different time period including at least 2021 but clearly the RGGI rule is not the primary driver of expected emission reductions. Another way to look at the RGGI reductions is to compare total CO2 emissions baseline for the period 2022-2030 if emissions stayed at the 2020 emissions rate throughout the period (779 million tons) to the total RGGI budget over that period (690 million tons).  In that scenario RGGI will reduce emission by 88 million tons which is just 47% of the reduction claimed by DEP on their website. 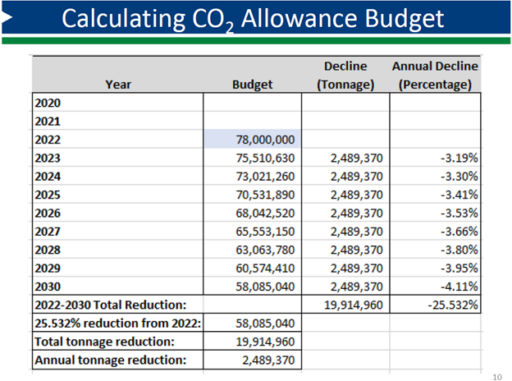 The meeting materials for the Citizens Advisory Council also included modeling results which should be the basis for the DEP claims.  They used ICF’s Integrated Planning Model® (IPM) to simulate the power generation system.  The modeling used the “most recent laws, policy changes, inputs & assumptions”.  Note that this model only projects impacts for the power sector and wholesale electric costs, it does not include costs for the economy as a whole.  The model is run for two cases: a reference case (without the RGGI regulation) and a policy case (with the RGGI regulation) from 2021 going out to 2030.  (I believe that 2021 is the starting point for the summary totals listed in the spreadsheets.)

Even considering the total RGGI reductions within all the RGGI states, the results of the two ICF Models are only estimated to reduce CO2 emissions by 75 million tons (4.6%) in the 12 RGGI States.  In fact, IPM projects that CO2 emissions will increase in the other states by 22 million tons when Pennsylvania joins RGGI.  The ICF Case results do not report estimated emissions for either Nitrogen Oxides or Sulfur Dioxide so I could not check those claims.

The slide presentation presents six 2021 modeling results key takeaways that are listed below with my comments in italics:

The DEP website claims for RGGI emission reductions, health benefits, or economic benefits are not supported by the reported ICF model results.  For one thing IPM modeling does not estimate health benefits and economic benefits and even though the model can estimate SO2 or NOx emissions no data was provided. While many questions cannot be answered by the very limited modeling results released by DEP, it is clear that their claims for CO2 emission reduction benefits are not supported by the results that are available to the public.

In addition, the modeling results indicate most of the projected CO2 reductions will occur even if RGGI is not implemented.  It is not clear if it is in the best interests of the state to impose a new tax and bureaucratic program with such poorly defined benefits.