RGGI May Be Woke, But Pennsylvanians Will Go Broke

RGGI May Be Woke, But Pennsylvanians Will Go Broke

[Editor’s Note: Pennsylvania, thanks to trust-funder Tom Wolf is pursuing RGGi to be woke but it’s likely to make Commonwealth consumers go broke unless halted immediately.]

There is a disconnect between the elites in government, business, labor, and academia and common citizens in America. Many of the elite “have never worked an honest day in their lives,” as old-school folks might say. They do not understand what it takes to earn a living, run a business, or feed a family by the sweat of their brow. And some of those with beginnings in the “real world” — say, union officials — find themselves corrupted by money and power when they achieve positions of leadership.

President Joe Biden went to law school and became a politician. Gov. Tom Wolf of Pennsylvania inherited a successful business and lived off its wealth. We have young people major in political science, then become legislative staffers until there is an opportunity to run for office. They have no idea what goes on in the world of profit and loss, hiring and firing. They have no appreciation of what it takes to produce food and energy or make steel, cars, or widgets of any kind.

In the climate arena, we have people falling for climate scares and willing to risk impoverishing an entire civilization to finance windmills and solar panels that cannot possibly sustain a modern society. And it’s not just government. It’s big business, big labor, and practically all of academia. This state of affairs has had a terrible negative impact, particularly on the state of Pennsylvania.

Visible from western Pennsylvania’s Allegheny Mountain ridges are coal-fired power plants — and their plumes of water vapor — that have been integral to much of the regional economy for 50 years. Three plants east of Pittsburgh directly employ 550 people and support an estimated 8,100 jobs, according to Power PA Jobs Alliance, a coalition of labor and industry groups. Now, two of these power plants — the generating stations of Conemaugh on the Indiana-Westmoreland county border and Keystone in eastern Armstrong County—are slated to close by 2028.

The owners blame costs from the U.S. Environmental Protection Agency’s (EPA) wastewater rule. The regulation is expected to lead to at least 26 plants in 14 states to stop using coal, according to news reports. Another factor in Pennsylvania is Gov. Tom Wolf’s unilateral decision to join the Regional Greenhouse Gas Initiative (RGGI).

“These plants have sunk billions of dollars into environmental projects,” said Ken Umholtz, a Conemaugh employee commenting on the EPA’s concern about water quality. “We no sooner finish one thing, and it’s something else.”

Though the Conemaugh plant recycles most of its water, Umholtz said, “Environmentalists. . . plan to regulate us out of business, but they are not going to have electricity because there is nothing to replace us.

After eight regional refineries closed and others downsized, workers at a Philadelphia refinery hope the government won’t kill their jobs too. The modernization of the Trainer Refinery south of Philadelphia is initially obscured by aged brick buildings and hulking equipment. With closer examination, however, emerge brightly painted pipes, scores of gleaming white tanks, and towering construction cranes that hint of ongoing upgrades.

With a growing post-pandemic economy and strong energy prices, prospects are bright save for threats of a controversial carbon tax scheme by the governor and federal regulations. Federal rules have contributed to the closure of seven independent refineries on the East Coast since 2009, leaving only Trainer and three others remaining. And one of those — owned by PBF Energy in New Jersey — closed half its refining units and laid off 250 employees last summer. 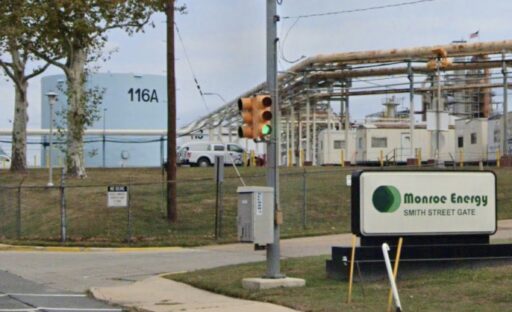 PA-based Monroe Energy, which owns the Trainer Refinery, annually spends tens of millions of dollars on improvements to keep abreast of government regulations and customer needs. A few years ago, it invested nearly $200 million installing equipment to make low-sulfur gasoline. Currently, the company is building high-efficiency electrical substations, as well as water-cooling units that enable millions of gallons of water to be reused, dramatically reducing dependence on Delaware River water.

Monroe employs approximately 500 people and hires at any one time up to 1,400 members of the Philadelphia Building Trades for maintenance projects that can last for months. Because of their work, Trainer produces daily more than 8 million gallons of fuel, mainly for transportation and heating.

Despite this, the overall decline of regional production capacity has left the East Coast vulnerable to supply interruptions and more dependent than ever on imported fuels.

Wolf’s proposal to institute a tax on electricity generators that use fossil fuels through the RGGI is intended to encourage the replacement of fuels like coal and natural gas with more expensive wind and solar energy.

In comments to regulators, Monroe noted its extensive use of electricity and cited data showing that the cost of power was 38 percent less in non-RGGI states. Despite spending hundreds of millions of dollars on environmentally beneficial investments, with plans for more, Monroe fears “that enacting a program like RGGI will increase costs to such an extent that we may be unable to move forward with some of these projects.”

Both RGGI and the Renewable Fuel Standard (RFS) requiring ethanol in all gasoline have drawn widespread criticism from labor and industry groups and from politicians of both major parties. While Pennsylvania and New Jersey governors are supportive of RGGI, both have written the EPA with concerns about the issue of RFS credits.

Yet more than 50 organizations representing millions of people have written in support of RFS reform. Even the National Wildlife Federation opposes the RFS because increased ethanol use has led to croplands infringing on natural habitats. Trade organizations of the dairy industry and bakeries have objected to RFS’s pressures on corn prices and supplies.

The negative consequences of both RFS and RGGI — including job losses and diminished fuel security — seem obvious to nearly everybody. Yet the employees at Trainer are still waiting for relief from Washington while also hoping to avoid the economic wreckage proposed by the governor and the absurdity of bureaucrats trying to improve the climate.

“We hope people will side with us and allow us to keep doing our jobs,” says Trainer employee Ron Pierce. A retired Marine sergeant, Pierce started as a unit operator and now leads the facility’s emergency-response teams and acts as refinery fire chief. Yet all that is in jeopardy now due to woke environmentalists and their cowardly and uninformed political supporters. It must be stopped!

To discuss the situation in Pennsylvania and how we can fight back against politically correct but scientifically-ignorant activists and their government allies, we have invited Gordon Tomb, a senior fellow with the Commonwealth Foundation, a PA-based free-market think tank, to be our guest this week on “THE OTHER SIDE OF THE STORY”on AmericaOutLoud.com on June 11 and 12 at both 11 am and 8 pm.

Reposted, with permission, from America Out Loud.