[Editor’s Note: No, climate change is not wiping out rhinos, bison or any other species. The bison and the rhino are doing just fine thanks to good old-fashioned conservation.]

Two beasts, which are thousands of miles apart, are making a comeback after centuries of overhunting. The iconic American bison and the greater one-horned Indian rhinoceros find themselves among the stories of conservation success in the 21st century.

As is the case of many other mammalian species, overhunting – and not climate change – had been the primary cause in the decline of bison and rhino populations. Though not rocket science, the obvious effects of overhunting on animal numbers are often lost in the noise of climate-change activism.

Climate doomsayers falsely attribute decline in populations to global warming and portray climate change as the major threat to species. However, just as was true for mammals like polar bears and tigers, the fates of bison and rhinos are dependent more on the prevention of poaching and overhunting than on controlling the uncontrollable – namely global temperature. 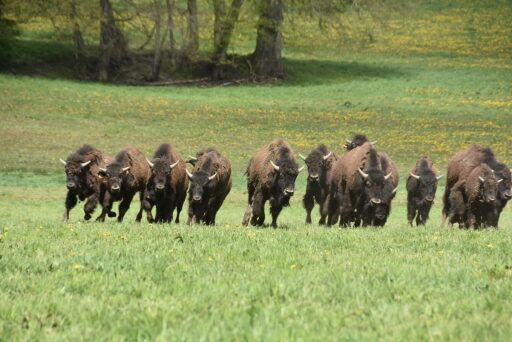 Even for a small kid from a third world country like this Indian native, the importance of American bison was unmistakable. An avid reader of Nat Geo magazines, I never missed articles on these impressive beasts that once dominated the plains of North America.

Once hunted nearly to extinction, the North American bison is now thriving. Numbering as many as 60 million centuries ago,  the U.S. bison population reached its lowest point in 1884 with only around 325 in the wild, including just 24 in Yellowstone. An average of 5,000 bison were killed every day between 1872-74, according to some estimates. By 1910, conservation efforts had brought the number of bison up to 1,000.

Today, there are at least 400,000 bison in the U.S., along with a bison meat industry that capitalizes on the animal’s relatively lean flesh.

In 2015, CNBC reported “sales of bison meat continue to grow, and so does the national herd. Consumers with more disposable income are attracted to grass-fed bison’s low-fat content, buying it everywhere from local farmer’s markets to Whole Foods.”  Between 2016 and 2021, live bison exports from Canada to U.S. increased by 50 percent.

Another species recovering from overharvesting is the Indian rhinoceros. Rhinoceroses derive their name from Greek, rhino meaning nose and keras meaning horn – an animal with a horn on its nose. While the two African rhino species have two horns, their three Asian cousins have just one.

Who knew rhinos could gallop?

A reason for the population boost is a decrease in poaching. Indian Rhino Vision 2020 was established in 2005 for the purpose of increasing the rhino population in Assam, where it successfully set up seven protected areas.

Reports show that poaching of rhinos was highest in 2013 and 2014, with 27 rhinos killed each of the years. In comparison, there were only six incidences in 2017, seven in 2018, three in 2019, two in 2020 and one in 2021. The park’s director says, “Kaziranga has a healthy population of rhinos despite casualties due to natural deaths, floods and infighting.” Credit for the recovery is given to increased policing and the construction of mud platforms that serve as refuge from floods.

Such successes frustrate climate alarmists who are obsessively focused on dampening human development in the name of saving other species. Their apocalyptic propaganda and wasteful expenditures on so-called green technology and other nonsense serve neither wild beasts nor humans.

True environmental care lies in conservation efforts that aim to protect endangered species in a scientific way that does not ignore the importance of economic activity.

This commentary was first published at Biz Pac Review, January 13, 2023, and can be accessed here.