“The bedfellows politics made are never strange. It only seems that way to those who have not watched the courtship.” — Marcel Achard

A massive Virginia offshore wind project (OSW) proposed by Dominion Energy (Virginia Electric Power Company) has raised serious questions regarding the transparency and veracity of Dominion’s filings in support of the project as well as the thoroughness of the environmental impact statement, and in the process, has revealed strange bedfellows. 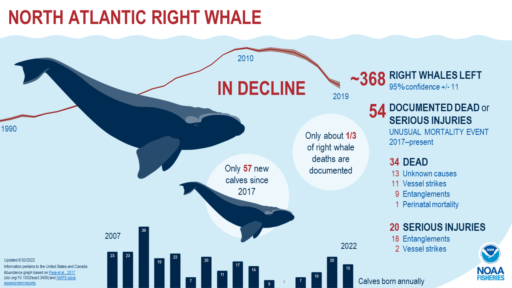 Specifically, the US Bureau of Ocean Energy Management (BOEM) has conducted the Environmental Impact Assessment for the Coastal Virginia Offshore Wind (CVOW) project which, if approved and constructed, would be one of the world’s largest OSW projects. What is deeply troubling is BOEM’s apparent willingness to bury potentially devastating information revealing significant deleterious repercussions affecting the welfare of the severely endangered North Atlantic Right Whales if CVOW is approved.

The utter contempt for the welfare of this magnificent creature is astounding, all in the name of a headlong, “Damn the torpedoes; full speed ahead” pursuit of a Green New Deal, Net-Zero, carbon neutral dystopian reality on the whim of a vacuous, erstwhile Millennial mixologist and her equally dim ilk proclaiming the world will end in less than 12 years. They dance like simple puppets on the strings of their billionaire masters. Oh…the hypocrisy!

It’s rather astounding that the great North Atlantic Right Whales and numerous other species of great whales were rescued from the precipice of certain extinction by the very natural resource that Joe Biden, his masters and acolytes, the Green New Deal and all its supporters seek to condemn to history’s trash heap…..oil and fossil fuels.

Two centuries ago, the use of whale oil and products derived from whaling was nearly ubiquitous. The hunting and slaughtering of whales was a lucrative, thriving industry for many decades to such an extant that by the 1830’s and 1840’s, numerous species had become extremely endangered.

The most threatened species were the Atlantic right whale and bowhead whale as they were the most commonly hunted species for whale oil. Both right and bowhead whales were relatively slow, quite docile and both species floated when harpooned and killed. As both species were also baleen whales (rather than toothed whales), their oil was prized because it was pure triglycerides and therefore, impurities were not present.

The great North Atlantic Right Whale and the bowhead whale were nearing certain extinction when, in 1859, Edwin Drake and a couple cohorts struck oil near Titusville, PA. In relatively short order, petroleum was deemed a rather desirable substitute/replacement for smelly whale oil which also had a very abbreviated shelf life, and shortly, oil/petroleum had supplanted whale oil as the desired lamp fuel as well as displacing many whale products previously deemed essential. 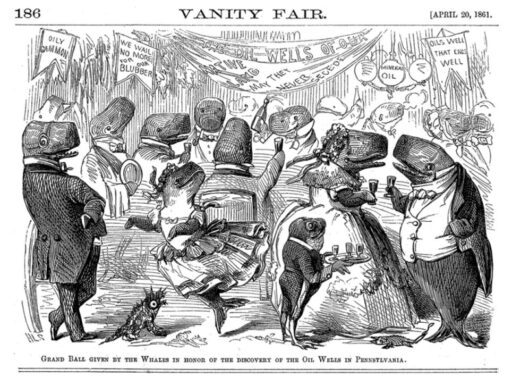 Within the 1859 – 1869 decade beginning with Drake’s Titusville discovery, the great whales were certainly saved, and the East and West coasts of the nascent United States were linked at Promontory Point, Utah by the Transcontinental Railroad. Yeah…progress benefitting an entire growing nation whether in 1869, 1890 or today is a terrible thing to embrace and support when your mission is to destroy the same in the name of saving the planet while your corrupt handlers redistribute and pocket billions of taxpayer revenue.

While the Atlantic Right whale and bowhead were direct almost immediate beneficiaries of Edwin Drake’s serendipity, what of you, your family, your ancestors and eventually, your descendants? You and yours are the big winners of the 1859 petroleum discovery. Your life expectancy doubled from 1860 to 2020 and the benefits and comforts afforded your lifestyle by the advent of fossil fuels are undeniable and unprecedented.

Have we come full circle and returned to the early 1800’s and the relentless pursuit of the Atlantic Right Whales in the name of energy to light and heat/cool our homes? Are we content to further jeopardize an endangered species for the sake of an OSW boondoggle?

What is the federal government hiding? BOEM is responsible for the Environmental Impact Statement, yet it’s also overseeing the Construction and Operations Plan or COP. A seemingly obvious conflict of interest aside, the COP is a huge document, but deep in its bowels is “Appendix R Threatened and Endangered Species Review.” One would expect to find in depth information regarding North Atlantic right whales in this appendix as the whales’ documented migrations pass directly through this region of the Atlantic, but BOEM has punted here, too, as there is no final report. In fact, the Threatened and Endangered Species Review contained in Appendix R is secret and the cover states: “Proprietary and Confidential Business Information Exempt from Public Disclosure.”

What is the federal government through BOEM and NOAA hiding from the citizens with their cloak of secrecy surrounding this OSW project? What is Dominion Energy and its parent, Virginia Electric Power Company, hiding from the public? And, why the cozy relationship between their massive project and federal regulators that will ultimately encompass and necessitate a huge redistribution of wealth from ratepayers into Dominion’s coffers?

Did someone mention strange bedfellows? Maybe the courtship needs the light of day.