Riverkeeper Says It Wants A DRBC of Unlimited Power

The Delaware PovertyKeeper, a/k/a Riverkeeper, has filed a reply brief in the lawsuit against the DRBC and it reveals it wants an agency of unlimited power.

The long and winding road that is the Wayne Land and Mineral Group (WLMG) case against the DRBC in Federal Court is one of those stages where motions and briefs are flying about like so much chaff in the wind. Amidst all the chaff is this revealing reply brief by the Delaware Riverkeeper Network, which is in the name of the organization and, of course, the ever-attention-seeking Queen of Obstruction, Maya van Rossum, the Riverkeeper personified. As convoluted meaningless legal briefs go, it’s pretty easy to digest, except for the implications of what the Riverkeeper says. It’s essentially an argument for a DRBC of unlimited power. 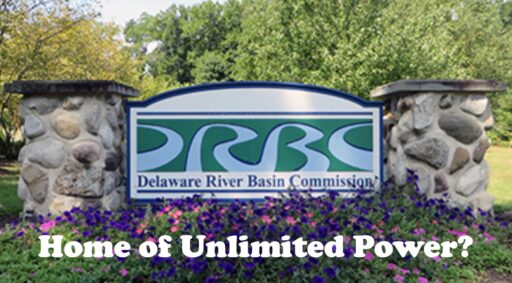 The Riverkeeper argument turns everything about the Compact inside out, but we don’t need to get into the details; the point is simply that it wants a DRBC unfettered by any limits on the latter’s power to regulate whatever it wishes. One must also understand the DRBC and Riverkeeper are allies, best buds and pillow talk partners, both being funded by the gentry class special interest starship known as the William Penn Foundation. The Riverkeeper knows it can bend the DRBC to its will and, therefore, the unlimited power it seeks is for itself and their mutual financial benefactor. As Edmund Burke said “It is a general popular error to suppose the loudest complainers for the public to be the most anxious for its welfare.”

The Riverkeeper doesn’t want the courts getting in the way of their benefactor’s power-grab, either. It goes so far as to tell the Federal District Court, in fact, that it should reject the order of its bosses at the Third Circuit Court of Appeals.

Readers may recall the Third Circuit determined the Delaware River Basin Compact was ambiguous on the matter of projects and could just as easily apply to a skyscraper project as a gas well:

No matter how “reasonably and liberally” we construe the Compact’s terms , we cannot ignore that the word “for” must have some purposive meaning and limiting function. Doing so would sweep nearly any activity that happens to use Basin water into the Compact’ s definition of “project,” which could potentially include the construction of a new skyscraper in New York City or a small housing development in rural Pennsylvania…

Broadly defining “project” to include Wayne’s proposed fracking related activities would sweep in undertakings that could appear out of place among the (admittedly non-exhaustive) list of projects and facilities expressly set forth in the description of the Commission’s general powers.

That’s the Third Circuit instructing the District Court and here is the advice from the Riverkeeper reply brief:

These strained assertions are contradicted by the Compact’s plain language, about which there is no ambiguity, and also by the undisputed factual evidence of the Compact drafter’s intent to provide a comprehensive planning mechanism for the interdependent uses of the water resources of the Delaware River Basin. WLMG continues to equate hydraulic fracturing and its planned natural gas development with a sink in office tower or a water fountain in a school, or sprinkler system in a hospital or church.

It was, of course, the Third Circuit that found ambiguity and used the office tower/skyscraper analogy. We can only conclude one thing from this; the Riverkeeper wants a DRBC of unlimited power and is foolish enough, in its quest for the same, to argue the District Court should tell the Third Circuit to bug off.

Fat chance of that, of course, but that raises the question of why Riverkeeper would even suggest such a thing. Savvy readers will understand, though. It’s all a con game on the Riverkeeper’s part. It’s taken millions from the William Penn Foundation to finance this game and the Foundation is the audience for the reply brief, not the court. It”s a head fake and nothing more but it does show us just how far down the road these people would take us if they could. As the Third Circuit previously instructed:

…the interpretation advanced by the Commission, the Delaware Riverkeeper Network, and Ms. van Rossum can be seen as unduly broad to the extent it could permit the Commission to exercise authority to review and control nearly all productive land use within the Basin.

Nothing has changed but the quality of the Riverkeeper arguments, which decline with every filing.