[Editor’s Note: The Rutland Center Solar project is located in an area of Upstate New York with large snowfall and isn’t likely to provide reliable energy.]

The CLCPA was described as the most ambitious and comprehensive climate and clean energy legislation in the country when Cuomo signed the legislation but there is one massive flaw.  The lawmakers who enacted this law presumed that the transition of the state’s energy system could be implemented by political will so did not include feasibility conditions in the targets or schedules.  This post is a short description of one aspect of the many implementation problems of this law.

I have summarized the schedule, implementation components, and provide links to the legislation itself at CLCPA Summary Implementation Requirements.  I have written extensively in long posts on implementation of the CLCPA because its implementation affects my future as a New Yorker.  I have described the law in general, evaluated its feasibility, estimated costs, described supporting regulations, listed the scoping plan strategies, summarized some of the meetings and complained that its advocates constantly confuse weather and climate.  The opinions expressed in this post do not reflect the position of any of my previous employers or any other company I have been associated with, these comments are mine alone.

My problem with this project is not the development itself but the lack of planning associated with the headlong rush to develop renewable energy to support the CLCPA.  At the 19 January 2021 Climate Action Council meeting the meeting presentation announced that “New York has made the largest combined renewable energy awards ever by a U.S. State”.  New York’s 2020 renewable energy standard solicitation includes 22 new large-scale renewable energy projects shown in the following map.  The thing that prompted this post is the location of the 110 MW Rutland Center Solar One project due east of Lake Ontario in the north central part of the state 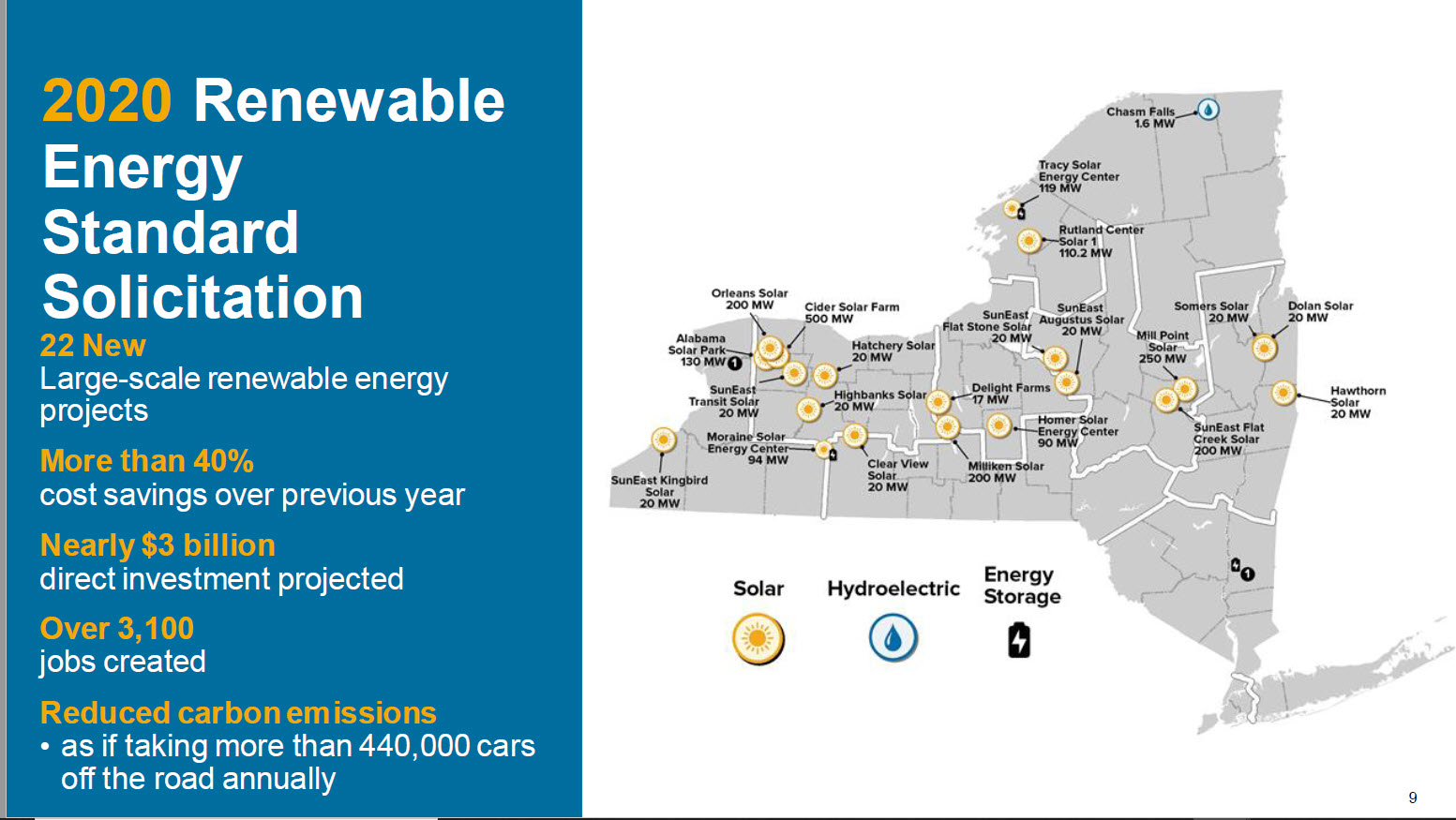 Anyone who knows anything about the weather at the eastern end of Lake Ontario knows where I am going with this post.  While it is not in the bullseye of the peak lake-effect snow area, the following map shows that it is darn close.  I am a meteorologist who has lived in and studied the lake-effect weather region of Central New York.  Because Lake Ontario does not freeze over in the winter anytime cold air crosses the relatively warm water clouds form if you are lucky and if you are not lucky it snows.

Of course, there are other factors that affect these storms but the key point is that the amount of snow is maximized by the time the upstream air spends over the lake so the eastern end is the optimal location for Lake Ontario lake-effect snow.  There is one other aspect and that is orography or elevation also increase snowfall amounts and the Tug Hill Plateau is at the eastern end of the lake squarely under the bullseye.

According to Wikipedia, the town of Rutland, New York has an elevation of 978’ as compared to Lake Ontario at 243’.  I could find no information about the solar project to determine exactly where it is supposed to go.  As you can see in the snowfall map there is a strong gradient of snowfall from the yellow (120 to 125”) to the pink (>200”).  Given the elevation difference of Rutland above the Black River Valley I believe that this solar center is affected by this orographic effect and is in the 150” of average snowfall per year area. 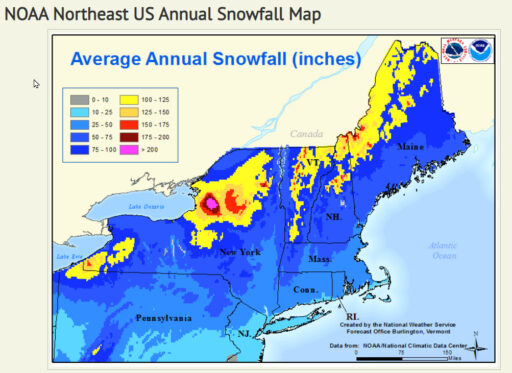 The problem with the lack of feasibility planning in the CLCPA is that they have not addressed the multi-day winter doldrum period when wind and solar are at their lowest expected availability.  There is a rush of solar energy projects that no doubt make headlines that New York has made the largest combined renewable energy awards ever by a U.S. State.  However, if those solar projects do not provide any power for the worst-case period then it might not be the best investment that New York can make.  Of course, the solar availability is even lower if the solar panels are covered by snow and it sure looks like the Rutland Center location is going to have that problem.

In conclusion, the CLCPA implementation process has to start looking at the big picture of how electricity will be produced during the multi-day winter doldrum because that might guide renewable energy investments.  If a project cannot provide any support during those periods it may not be appropriate to support.