Salem Witch Trials Tell Us How the Cancel Culture Will End

Political correctness takes many forms. It began a few decades back and has increased in shrillness since but the Salem Witch Trials tell how it will end.

Political correctness may be the overwhelming problem of civil society today. It’s reflected in the politics of climate, environmentalism, health, racism and so much else. Identity politics, born out of bogus critical theory and really just another form of political correctness have us seeking ever more purist versions of virtue.

We are already at the point, in fact, some statutes of Lincoln and Grant and others erected by emancipation groups are being attacked by know-nothing students and malcontents who have managed to convert universal rage over a bad cop into deep divisions over their own bad behavior. And, if you dare to utter a word of skepticism about global warming theory, you’re condemned for being a ‘denier’ as if science was a matter of faith and not, well, science.  Free speech is disappearing at an increasingly fast clip by our digital masters of the universe. The civil of civil society seems to be collapsing.

Take heart, though. We’ve been there before and we can learn something from those experiences, especially the Salem Witch Trials. Political correctness will ebb when the heroes of the causes inspiring this modern day book burning and witch hanging themselves become the targets. 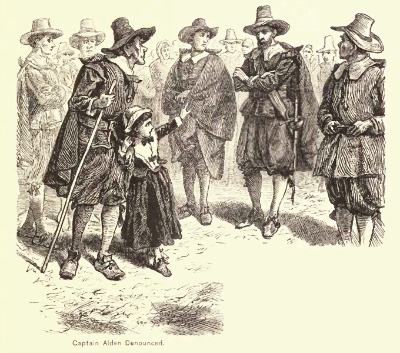 “Captain Alden Denounced,” illustration published in “A Popular History of the United States,” Vol 2, circa 1878

John Alden and Priscilla Mullins are among my ancestors. Both were Mayflower passengers and the story of their marriage is told in Longfellow’s famous poem “The Courtship of Miles Standish.” Some history buffs will recall that Longfellow was also a descendant of the couple and used what he said was family lore to pen these rather well known lines:

Any woman in Plymouth, nay, any
woman in England,

Might be happy and proud to be called
the wife of Miles Standish!

But as he warmed and glowed, in
his simple and eloquent language,

Quite forgetful of self, and full of the praise of his rival,
Archly the maiden smiled, and, with

Eyes overrunning with laughter,
Said, in a tremulous voice,

“Why don’t you speak for yourself, John?”

And, so Priscilla married John Alden, not the Miles Standish for whom he pleaded. John and Priscilla had 10 children, one of whom was Captain John Alden, Jr. and here’s a bit of his story:

Captain John Alden Jr, the son of Mayflower pilgrim John Alden, was a merchant from Boston who was accused of witchcraft by a local child during the Salem Witch Trials in 1692.

Alden had stopped at Salem in May on his way home from Quebec where he had arranged the release of British soldiers captured at the Candlemas attack in York, Maine. After he was accused, police officials brought Alden before a judge for questioning.

Alden wrote his own account of this examination and the events of that day, during which he suggested the afflicted girls at the center of the hysteria, whom he referred to as “wenches,” were merely pretending to be bewitched and also said they were being prompted by a man standing behind them to name Alden as a witch…

One of the afflicted girls, Mercy Lewis, lost her parents in an Indian attack in Maine, prompting many historians to speculate that the girls believed Alden was indirectly responsible for their deaths, as well as the deaths of many others, and accused him of witchcraft in retaliation…

After being held in a Boston jail for over four months, Alden managed to escape the jail with the help of some of his friends sometime between September 12 and September 16. He fled immediately for New York where several other accused witches were hiding out.

It wasn’t until the witch trial hysteria began to die down that winter that Alden declared “the public had reclaimed the use of its reason” and decided to go back to Salem and post bail.

He finally appeared in court on April 25, 1693, after the hangings had stopped, and his case was dismissed.

So, why did the hysteria die down? Well, we find it here:

There are many reasons that the Salem Witch Trials ended in early 1693. Many villagers stopped hunting for witches because they had lost friends and family during previous trials.  They felt that innocent people were being executed and wished to end the witch-hunt. Another group of villagers began to doubt evidence provided in court. They claimed that some of the evidence was not practical and that confessions were being forced through torture and were not true. Speculation also grew around the accuracy of “spectral evidence.” Villagers thought that complaints of being tormented by a witch’s “spectre” were not all true and that spectral evidence was not practical enough to prove that someone was a witch. Many of these methods were outlawed because of their lack in accuracy and this caused the number of guilty witches to decline.

The largest reason, however, for ending the trials was because accusations made were becoming too bold. During the beginning of the trials, people with little to no power were accused because it was harder for them to defend themselves. For instance, Tituba, a slave from Barbados, was the first witch accused. She was quickly sent to jail because she was of such low status because she was a slave, a woman, and was of color. As the hunts continued, the accusations were made toward villagers of higher status. Some of these accusations shocked the Salem Villagers but trials and executions were still carried out. Towards the end of 1692 accusations that were too bold were including one against Governor Phipps’ wife. The town quickly turned down charges against the accused witch and as the accusations grew even bolder, the trials came to an end.

In 1693, Governor Phipps dissolved the Court of Oyer and Terminer and all trials were moved to a higher court. This superior court did not allow “spectral evidence” and, since most of the earlier accused witches had been executed due to this evidence, any remaining “ witches were all ruled innocent. Then, the people of Salem realized that previous trials had been ruled incorrectly and that innocent people had been executed. After realizing this, the people of Salem immensely regretted their actions.

Yes, when the extremists went after the wife of the governor who had, by order, created the court to conduct the Salem With Trials, that was a bridge too far. And, that’s where we are in America right now, as spoiled children scream obscenities at African-Americans for not accepting their worldview as the latter defend the Emancipation Monument built by freed slaves:

Pretty amazing, huh? The screaming child having the temper tantrum could just as easily have been Captain John Alden, Jr.’s accuser or one of the accusers during the French Revolution as they devoured their own and executed Robespierre. It has happened repeatedly throughout history in the same manner, with a turn toward absurdity that eventually yields a return to sanity. We’re on the cusp of that as I see it.

And, it’s none too soon. Political correctness and various other manifestations of critical theory are rapidly destroying free speech and, with it, civil society. The idea that one must blindly accept WuFlu rules, advocate for uneconomical “green” energy and apologize for capitalism or be rendered as a non-entity by the captains of social media is just more of the same. We are living under techno-fascism, in fact, the new Salem Witch Trials. But, it will end soon, when the forces accusing everyone else of fascism, climate denial, systemic racism and ever other vile thing turn their ire and their hate toward Hollywood, the heads of Facebook, Google and Twitter and the demagogic politicians who brung them along. We’re just about there, as I see it.