BlackRock is the home of stakeholder capitalism and ESG, another name for shameless corporatism but conservatives are following Saul Alinsky to defeat the evil.

Anyone who has read Saul Alinsky’s “Rules for Radicals” understands how brilliant he truly was, despite his extremism and the extraordinary damage he did to our civil society as the vanguard of a Marxist movement built on fraudulent critical theory. He stood for bringing every down and never built anything other than his own reputation as a destroyer.

Yet, Saul Alinsky was inarguably perceptive to the nth degree and knew how to shake things up, which occasionally must happen to save us all. We are at one of those junctures today. We are living under more tyranny every minute as a uni-party of politicians and cabal of elites is doing everything in its power to completely orchestrate and re-orient our lives to serve its own special interests. Among the principals of this evil oligarchy is BlackRock, the investment company, but the good news is that a Saul Alinsky tactic being utilized by conservatives is beginning to rein in this dragon.

One of Saul Alinsky’s most famous rules was this one:

“Pick the target, freeze it, personalize it, and polarize it.”

This what leftists do incessantly, of course. It is basic to critical theory and other nihilist ideologies and philosophies. Conservatives have never been good at it, but Barack Obama, as an Alinsky idolizer, was superb. Hillary Clinton tried it with here “basket of deplorables” line but the target was too big and Hillary too unlikable to make hay out of it. Establishment Republicans have never been able to do it because they think of themselves as “the man” who is the target.

Notwithstanding all this, something is happening. Conservative Republicans not necessarily aligned with the establishment wing of the party represented by the reprehensible Mitch McConnell and his ilk are moving, in Alinsky fashion, to address the phony ESG phenomena being used to aggregate power and riches on behalf of elites. BlackRock, which we covered here and here, has been targeted, frozen, personalized and polarized by conservative Republican attorneys general and governors who have gone on offense for a change.

Yesterday, Ron DeSantis, Governor of Florida, our 3rd largest state (after California and Texas) joined the effort launched by other states to pull investments out of BlackRock due to their ESG initiative and deciding to make oil and gas the enemy to the great detriment of not only energy security but also the financial returns of their customers. Call it Larry Fink’s man crush on Klaus Schwab, or is it Bill Gates? Whatever it is, it’s an obsessional desire for power, influence and ever more riches.

But, it’s not working. Saul Alinsky seems to be living in the heads of these conservatives and, while the collective money involved may seem paltry in comparison to BlackRock’s trillions in assets, it’s the trend that matters as they say in politics, in fashion and among the woke. And, the trend is not good for BlackRock. Here, in fact, is a chart illustrating BlackRock’s quarterly total assets in billions from March, 2009 to September, 2022: 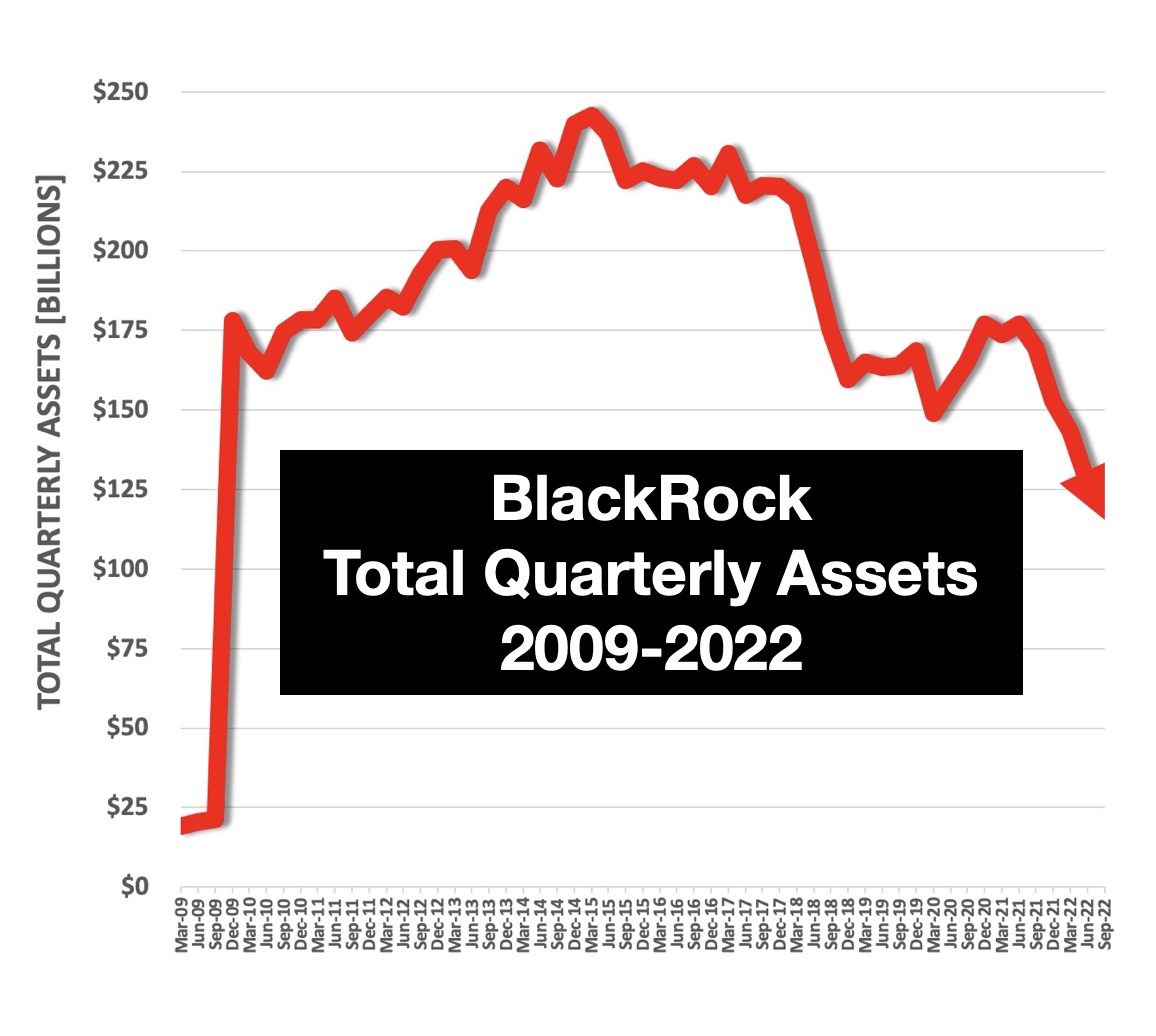 Note BlackRock’s most recently reported total quarterly assets are now the lowest they have been since September, 2009, six months after they first started reporting. Total assets refers to the company’s own assets, not assets under management for others but it’s indicative of the fact BlackRock isn’t all that it seems. Why are its own assets declining? Is paying out too much in dividends? Is it selling off its own ESG assets? Are the Saul Alinsky tactics working with respect to the most recent sharp decline?

Moreover, there is this from the great JoNova:

BlackRock is the defacto Global Climate Police — but disguised as a monster investment fund. The way to break it is to expose that its primary interest is not in making money for its clients but as a Woke political tool.

BlackRock are able to intimidate most of the world with $10 trillion dollars in assets. They are effectively the third biggest “country” in the world by GDP. But it’s an illusion. They are wielding other people’s money — using their clients own pension funds to indirectly punish their own clients. And once those clients figure it out and pull their funds, BlackRock will become an empty shell. Couldn’t happen to a nicer company…

It’s a scam where BlackRock target legal corporations in states that voted to use fossil fuels to effectively undo what the voters wanted. A few months ago, 19 States in the USA started asking BlackRock and the US SEC some hot and hard legal questions. West Virginia announced they would boycott firms that boycott fossil fuels, and now Florida joins them in boycotting BlackRock.

JoNova then quotes a Reuters story  on Florida’s action:

Dec 1 (Reuters) – Florida’s Chief Financial Officer said on Thursday his department would pull $2 billion worth of its assets managed by BlackRock Inc (BLK.N), the biggest such divestment by a state opposed to the asset manager’s environmental, social and corporate governance (ESG) policies.

And raises an another interesting question.

BlackRock “used to have $10 Trillion in assets to manage, now it has eight?

The move will hardly dent BlackRock’s $8 trillion in assets and drew a strong response from the company, which said the action put politics over investor interests.

That is interesting isn’t it? What happened to the Two Trillion? Is it merely a reflection of stock values declines or does it suggest investors are looking elsewhere now that BlackRock’s preference for politics over pension values has become clear? Well, the following chart offers a bit more perspective as it addresses total assets under management by BlackRock, not just those it owns: 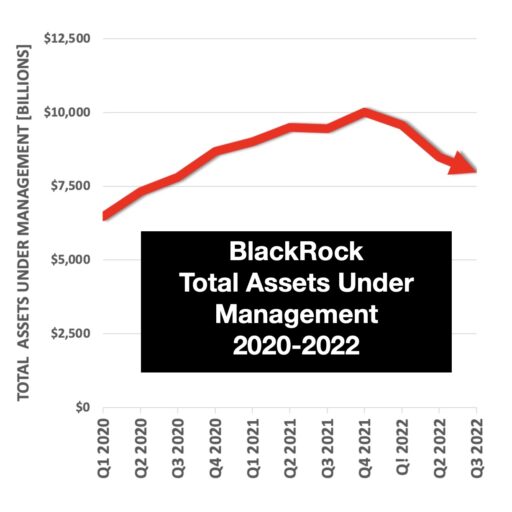 This chart only tracks assets under management since 2020, but the trend is clear. Those assets rose during 2020 and 2021, reaching the $10 Trillion peak when COVID lockdowns were rampant and began to decline dramatically once conservative states started fighting back in 2022 by identifying BlackRock, freezing it in the public’s mind, personalized it by highlighting Larry Fink’s role with the hoard World Economic Forum, and polarized opinion by exposing BlackRock for the politically villainous outfit it is.” Thank you, Saul Alinsky!