SCCTC Trucks It Into the Future with Help of Gas Industry

SCCTC, otherwise known as the Susquehanna County Career and Technology Center, is preparing young folks for all sorts of careers, including as CDL drivers.

Approximately six months after announcing the development of a CDL training program, the Susquehanna County Career and Technology Center (SCCTC) is only weeks away from teaching the newest slate of CDL drivers looking to join the workforce. 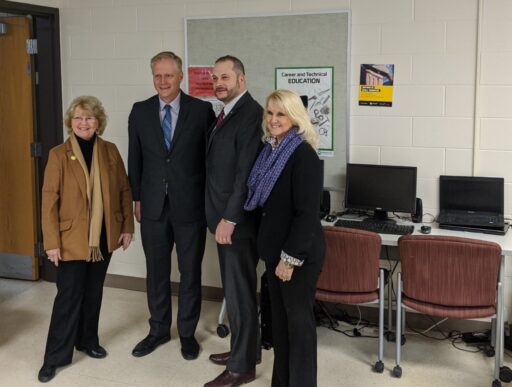 On Friday, the SCCTC hosted Congressman Fred Keller and several other elected officials to tour the classroom building as well as the pad where students will hone their driving skills and get the education and practice they need before hitting the roads.

As noted during the July announcement, the program is the result of trucking companies from around the region partnering with the school and Cabot Oil and Gas to create a larger workforce for the trucking industry, which has a significant need for drivers.

“In total, we’ve probably been working on this program for close to four years,” Cabot’s Bill desRosiers said. “But the SCCTC has become a bastion for education opportunity in developing the workforce that the area needs. And this is a prime example of private investment working together with education to meet those needs.”

A 300-foot-by-150-foot pad of lined pavement was built on school property for students to drive and learn – with room to expand – and a nearby two-classroom building is under construction as well. DesRosiers noted that the school would also ideally like to get a driving simulator in the classroom as well as expand the class to include equipment operators.

“Due to federal regulations, the center will only be able to teach adults ages 18 and up, but the advantages to obtaining a CDL isn’t just beneficial to natural gas,” he said. “Welders, carpenters – many other employers can find a job candidate very attractive just by them having a CDL license.

“But we would like to see all of those things eventually,” desRosiers continued. “We have a plan. We have a pathway to develop into the future. But we’re talking about family-sustaining jobs. These companies need these employees. They’re offering great benefits and are even paying for their vacations. That’s how badly these employers are trying to attract employees.”

SCCTC Executive Director Dr. Alice Davis explained that the CDL program will host 12 students at a time, and have a five-week day course and 10-week night course to accommodate as many unique schedules as possible.

“We see the listings online and in the paper for CDL drivers,” she said. “And people want to be trained. This program will bridge that gap and significantly help young families.”

Davis added that the program is expected to launch sometime in March and cost students approximately $6,000 – which many companies will actually pay for if it means getting a dedicated employee.

Imagine that, guaranteed job placement, a free education and getting paid to go on vacation – take that Bernie (I’m sorry, I had to.)

But it is extremely telling just how far private companies in a free market will go to attract employees if the demand for their services is there. It’s a monumental example of the laws of supply and demand. One might complain about the “inequality” of it all. But the last time I checked, someone who majored in “gender studies” probably doesn’t know how to drive a truck and most certainly does not get their vacation paid for.

But back to the subject at hand and off my soapbox, the tour of the new facility and driving grounds was followed by a roundtable meeting and discussion of elected officials, business representatives and school administrators.

The development of the CDL program has just been the next step of private businesses with a need partnering with local educators to provide families with the skills they need for the jobs and sustainability that they need. Rural Pennsylvania continues to lead the way in actually helping people get good jobs and learn new skills while the state government simply focuses on new ways to take and spend money from the people and companies that earned it.