That school finance junk science study from Penn State has more than a few flaws, as it turns out, and the authors just can’t help revealing their biases.

I don’t label studies junk science lightly, especially when they’re from Penn State, my own alma mater. But, then again, this is the same university where Michael Mann works. You know…the hockey stick guy. A few weeks ago I reviewed a draft study and some related articles on school finances in Pennsylvania. And, yes, I believe it to be school finance junk science. As I noted then:

This data, of course, proves nothing other than the fact gas drilling has taken place in rural areas with less wealth, which is surely a surprise to no one and that is precisely why rural areas have wanted it…

This hyped up study, in other words, simply shows richer school districts have more revenue to work with and always have…

The hype in The Conversation and the Inquirer is of the worst sort; it essentially says a 200 pound man who gains three pounds is growing three times faster than a 10 pound baby who grew by one. It’s meaningless and apparently intended to help make a case for a severance tax. Don’t fall for it.

My little expose on school finance junk science and my argument got no response from the authors, but Ken Cuomo’s subsequent post did and it’s very telling.

You can read the authors’ response and judge for yourself but it’s a lengthy comment with not much substance. But, it does offer these revealing points to which I offer responses in red:

I’ve read this school finance junk science study several times now and it doesn’t smell any better after over time. The authors will no doubt, say my comparisons aren’t apples to apples and their’s are but we’re offered to truly demonstrate that. Meanwhile, I have updated my table, looking at 2008-09 to 2017-19 (data easily available in one source for those years) and added some details.What these new tables show is that districts I examined from different drilling counties experienced real inflation-adjusted revenue gains per pupil of 16% to 44%. Here they are, including the updated figures for Elk Lake: 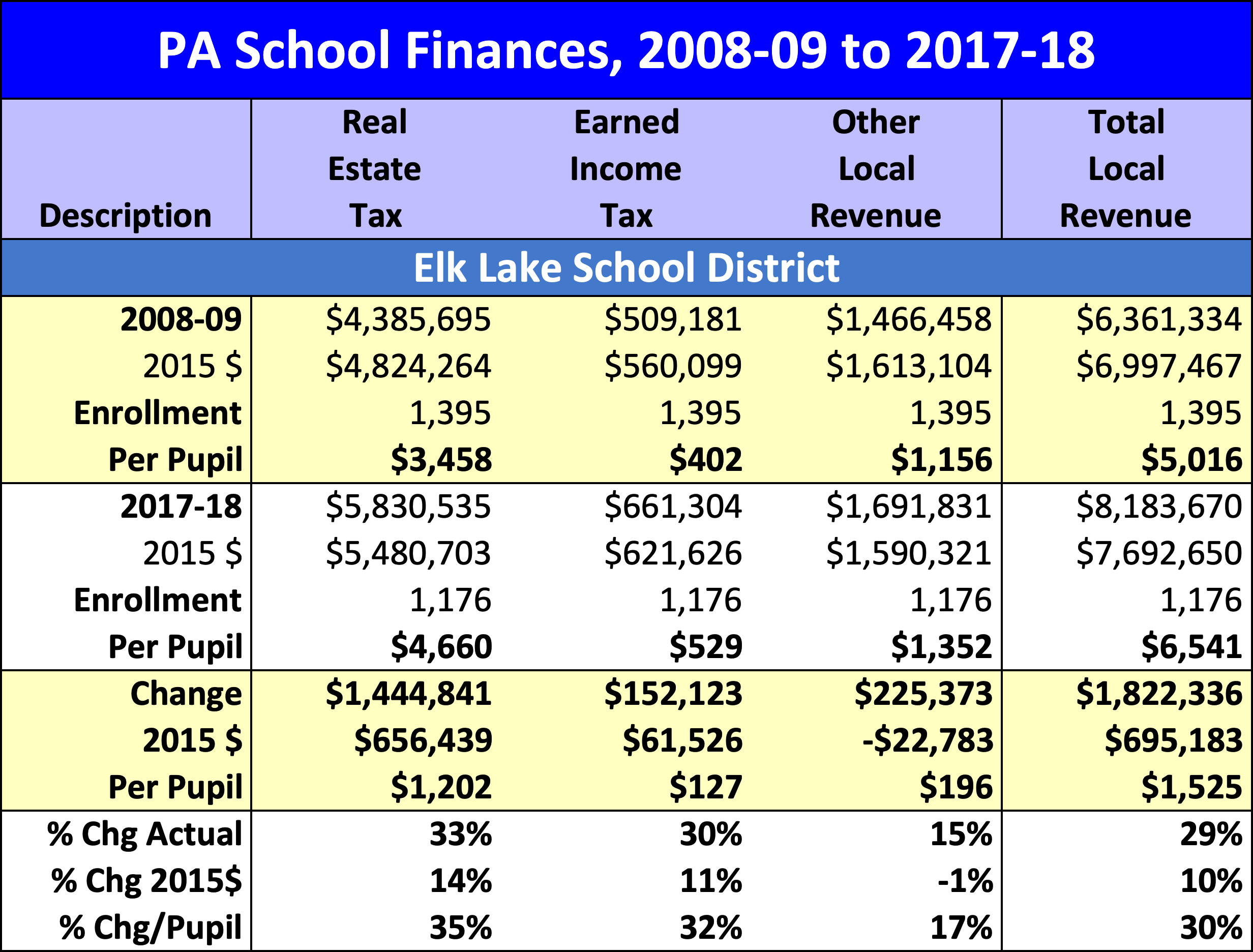 Revenue per student up 30% over eight years in real dollars. (Susquehanna County) 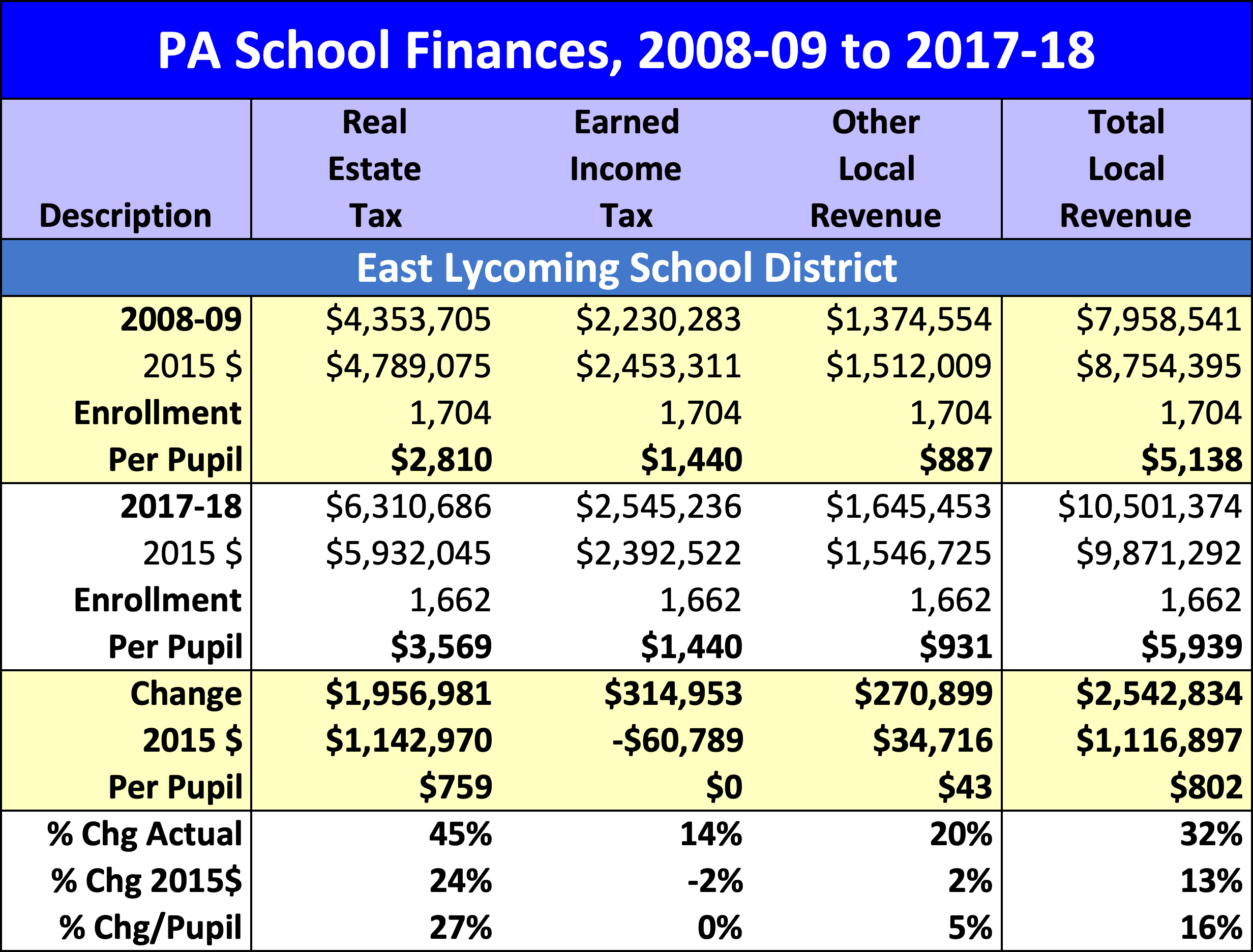 Revenue per student up 16% over eight years in real dollars. (Lycoming County) 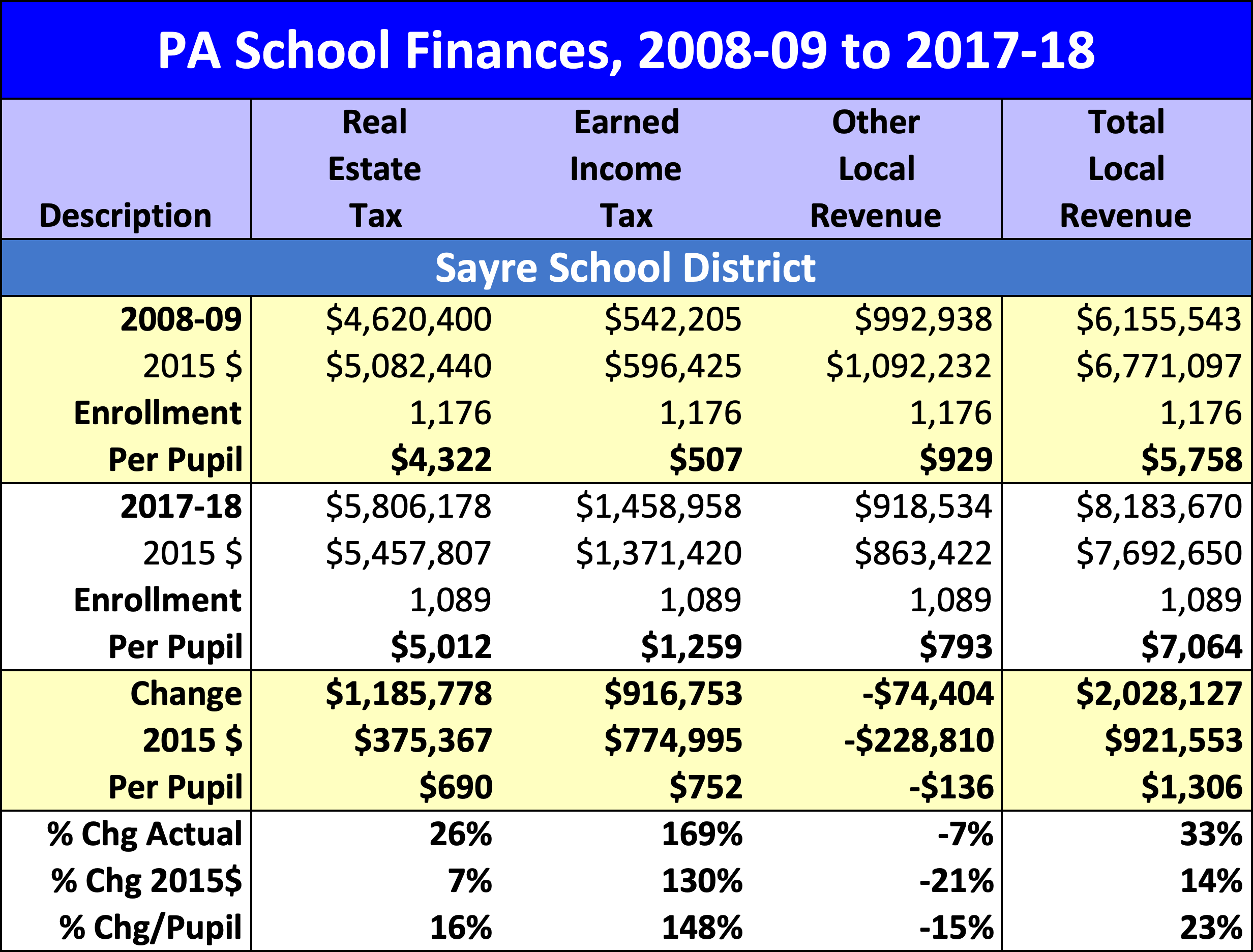 Revenue per student up 23% over eight years in real dollars. (Bradford County) 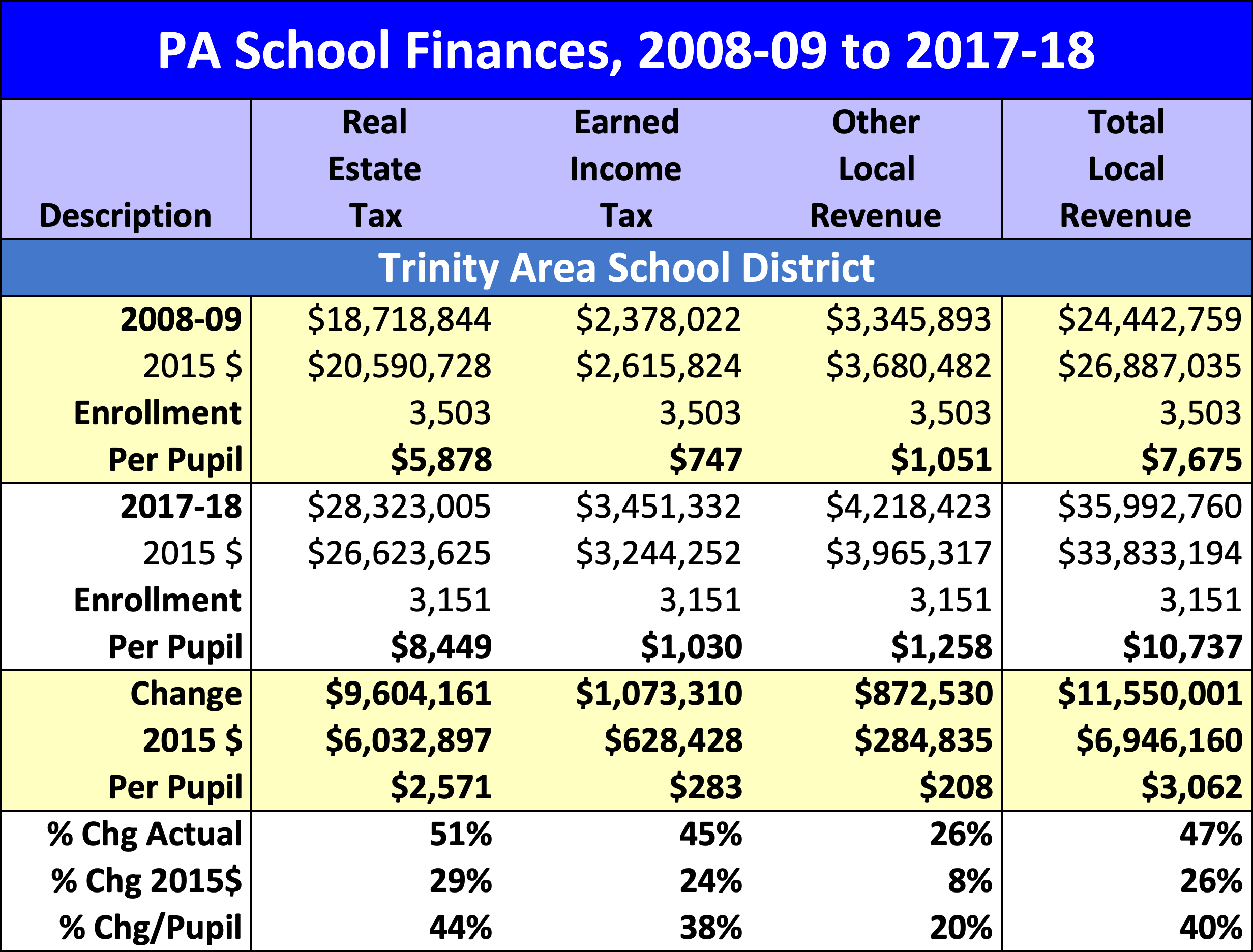 Revenue per student up 40% over eight years in real dollars. (Washington County) 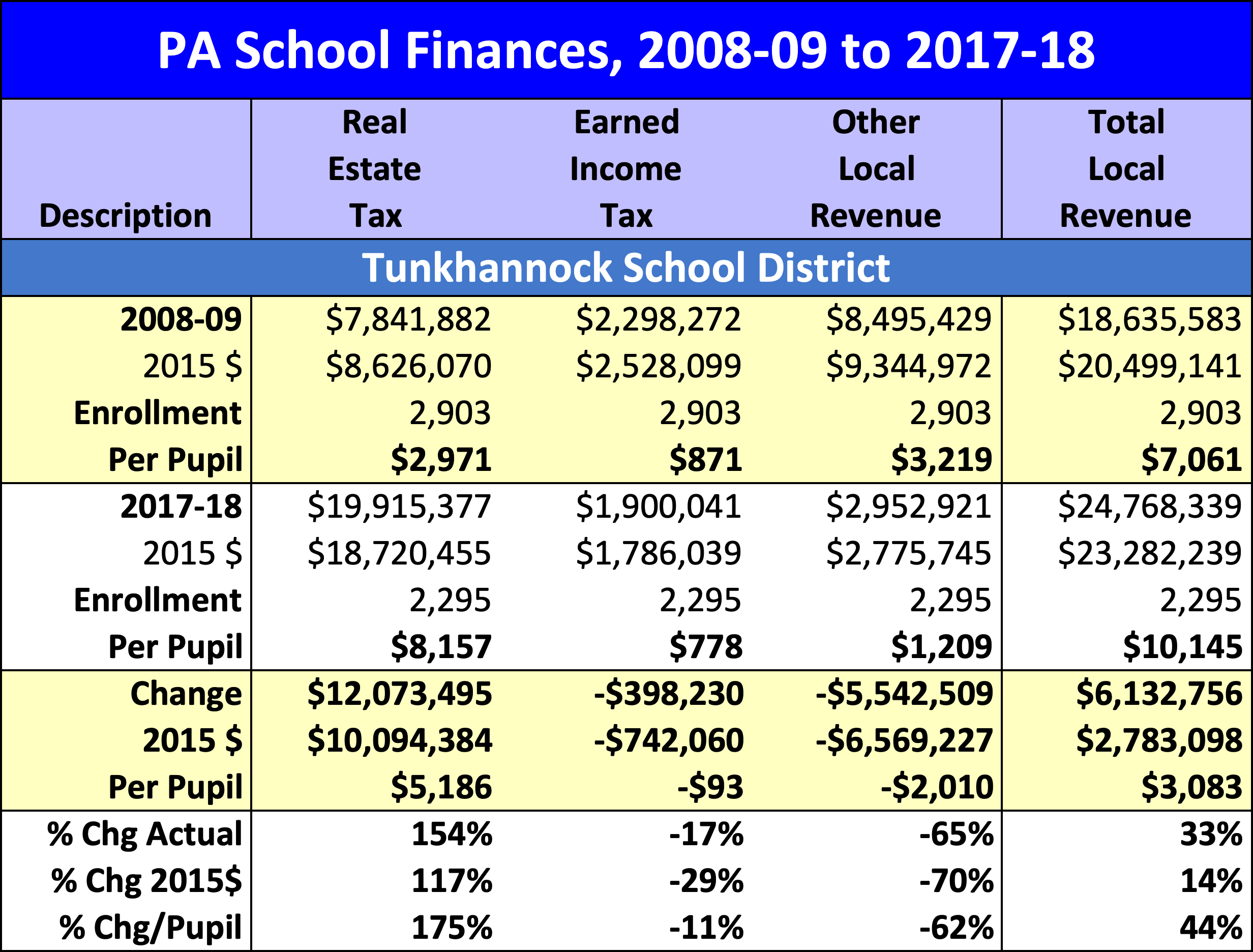 Revenue per student up 44% over eight years in real dollars. (Wyoming County)

So, there you have it; five examples from the top five gas drilling counties in the Commonwealth, with average gains in real inflation-adjusted per pupil revenue of 2% per year to to 5.5% per year. We don’t need to know a lot more, do we?